A number of images and hands-on impressions have surfaced of Valve’s HMD (Head-Mounted Display) from a Boston VR event.

A four day event called the “Boston VR Bender” is currently being held between May 31 and June 3. During this event, a number of visitors were able to see and try out Valve’s upcoming HMD first hand. Their impressions and images have been posted all over /r/Oculus on Reddit.

One noticeable entry was by a user named jonomf. In his thread he wrote about the headset using “dual vertical S4 screens, running a total of 2160×1280.” The demos that were available were the same that were shown at the Steam Dev Days event earlier this year. The Valve team also mentioned two Dota 2 VR demos they had created, but weren’t available at this event. One of the demos showed the entire game arena on a table below you, and the other demo showed life-sized characters fighting in front of you. 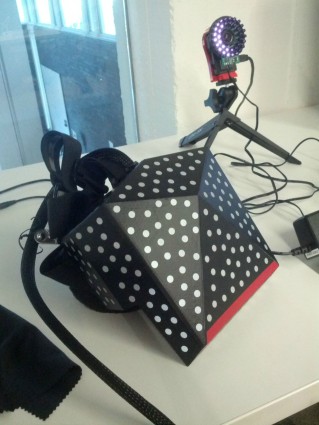 Jonomf uploaded a total of seven images of the HMD to a gallery on Imgur. One of those images is shown above.