A simplistic yet satisfying visual novel, here is my Tokyo School Life Review.

Tokyo School Life is a visual novel developed by M2 Co. This game is what most would expect from a non-ecchi visual novel. You play as a foreign exchange student coming to Tokyo for a few months. Luckily, your character speaks nearly perfect Japanese. His and your main objective is to meet a nice Japanese girl and fall in love.

Your time in Japan is spent with three different class and dorm-mates: Sakura, Karin, and Aoi (pictured below from left to right). These three have pretty cliched personalities. Karin is the tsundere girl who is often rash and a bit violent. She is also an up and coming idol. Aoi is a very kind and helpful girl. Most see her as just another one of the boys. Sakura is a very quiet and gentle girl. Deep down, she is a massive otaku. Sakura also has a medical condition which is never identified throughout the game, only that it is not a heart condition. 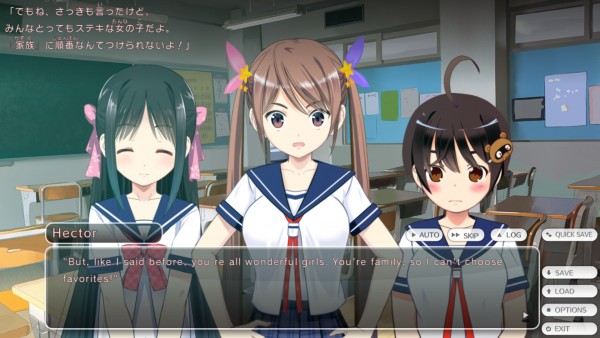 You spend a little time with each of the three girls throughout the game to get a feel for their personalities and a preview of their back stories. Dialogue choices will appear at select points in the game which boosts the three girls’ affection towards you. Affection is earned based on the option selected from the three choices. You can earn zero, one, or two points depending on the choice you make. The result is met with a high sparkly sound for two points, a low sparkly sound for one point, or no sound at all for no points. A short change in dialogue will be given after the dialogue choice before continuing with the story. 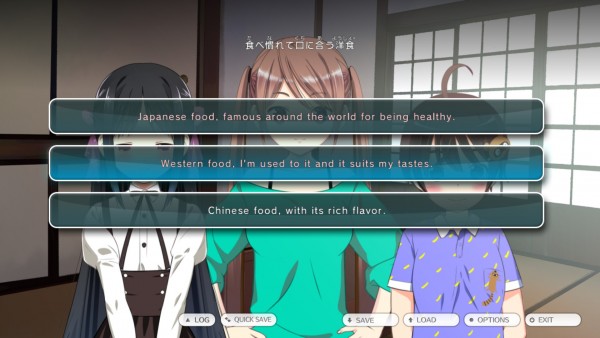 These dialogue choices will show up several times throughout eleven chapters. There is one chapter for each day in-game. If you earn enough points with one (or all) of the girls, their favorite school trip spot will show up during school on the eleventh chapter. Choose one of their school trip spots to continue the love story with that particular character for another four chapters plus an epilogue. If you don’t earn enough points with any of them, you will not get any options, and the game will end shortly after the school trip with a male classmate. 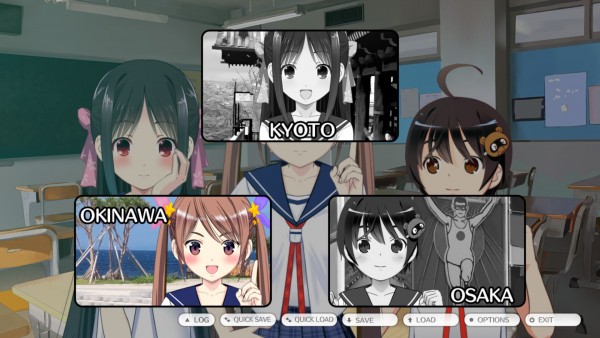 Although their personalities are pretty common and cliched, their back stories add a little more flare to the game. The back stories are not completely original to those who have seen a lot of anime, read a lot of manga, or played a lot of visual novels (SLIGHT SPOILERS ON THE CHARACTERS’ BACK STORIES IN THE NEXT SENTENCE). One girl wishes to become an idol, one girl wishes to become a manga artist, and one girl is struggling with karate and family issues.

The great thing about this game is the animation. Most visual novels have either completely still artwork or artwork with blinking eyes. Tokyo School Life on the other hand has cell-shaded 3D characters that actually move around, blink, and move their mouths as they speak. The background is still completely stationary, however. 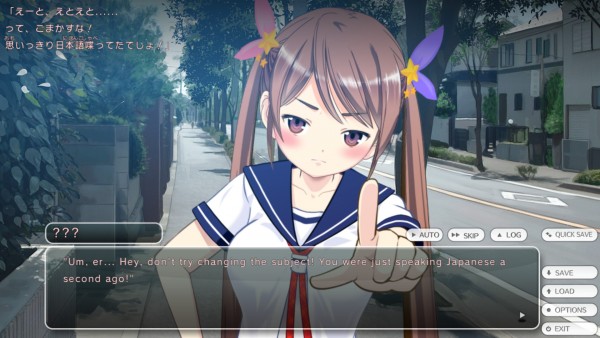 All three girls have terrific voice actresses that speak during every part of the game. However, the main character does not have a voice actor, nor do any other characters that may appear in the story from time to time. There are only Japanese voice options, but written dialogue includes both Japanese and English.

Other positives to the game are pretty much standard with any decent visual novels these days. You can choose auto to allow the dialogue to play automatically, skip will quickly skip through all the dialogue you have read during previous games, and you can view the log to jump back in the conversation if you accidentally skipped forward or would just like to replay the conversation. The skip option is highly useful when you want to replay through the game and try to win the affection of the other girls.

The extras included in Tokyo School life are the nine original soundtracks and thirty screenshots. The faces and expressions on the screenshots can be changed with a left mouse click while viewing the screenshot at full screen. The extras are a bit scarce, but still welcome additions.

All in all, Tokyo School life is a great visual novel for someone who is new to the genre. The characters are common for Japanese love stories often found in anime and manga, and the dialogue options are easy to choose from when going for one (or even all) of the girls. Each of the three story lines are rather short for a visual novel. I was able to complete all four story paths within about 17 hours, which is short compared to very popular and story-driven visual novels. This game may seem a bit too cliched and brief for the hardcore anime and manga fans whom are looking for something deep; however, the simplistic story, dialogue options, short story paths, and price is perfect for beginners.