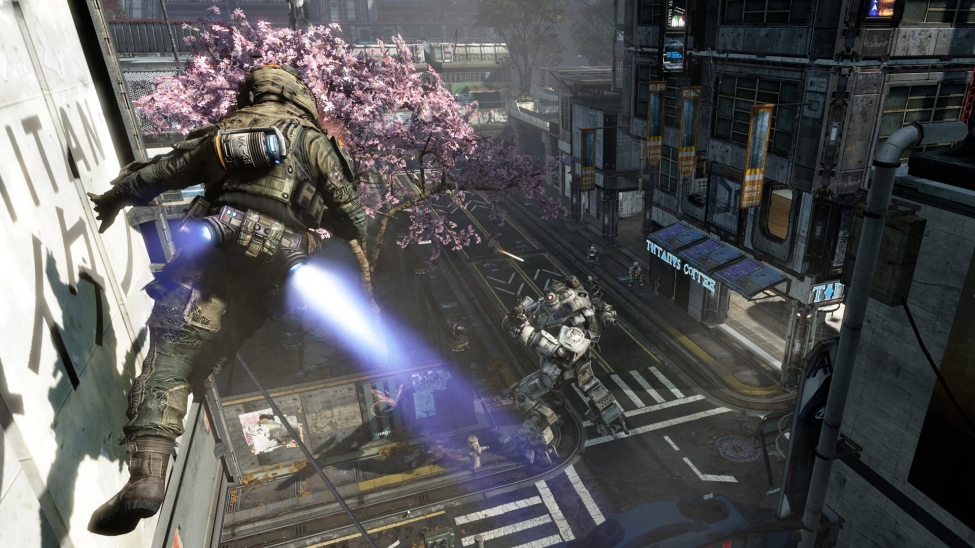 This game had a lot of steam behind it out of the game, but does it live up to the hype? Here’s my Titanfall review.

Titanfall is the very first game from Respawn Entertainment, a development team that was created from a huge chunk of Infinity Ward, the original team behind the Call of Duty franchise. After a huge issue during Call of Duty: Modern Warfare 2, many developers jumped ship and joined EA. A lot of hype was surrounding both the developers and Titanfall, but does this game live up to it?

Side Note: This review was written long after the game’s initial release; however, I will be reviewing the game as if it just came out.

The gameplay of Titanfall is split up between Pilots — which are the soldiers that control Titans — and the Titans themselves. Surprisingly, switching between Pilots and Titans is incredibly fluid and simple in this game. You can get in and out of a Titan with ease, and there’s very little difference in gameplay.

Pilot movement is very smooth and arcade-like, similar to the Call of Duty franchise. However, the shooting and basic running are the only similar points. While playing as a Pilot, you can use a boost pack to double jump from rooftop to rooftop. Pilots can also run along walls to traverse the area while staying up high.

Each Pilot carries a primary weapon, sidearm, anti-Titan weapon, ordnance (explosive equipment), a tactical ability, and a kit. There aren’t many abilities available to a Pilot, but the ones that are in the game are very useful. They include cloaking, health regeneration and speed boost, and active radar! Kits are basically perks that help either Pilots or their Titans.

Of course, the main feature of Titanfall are the Titans! Titans are the large mechs that Pilots operate. After enough points are made by a player in a game, a Titan can be called in and used. Most people immediately pilot Titans and wreak havoc with their ultra powered weapons, or they may use their Titans to defeat enemy Titans on the map. A Titan can also be set to follow mode to keep it near the player that called it in, or they can be set to guard mode to guard an objective or position. When a Pilot isn’t in a Titan, the Titan will engage enemy combatants and enemy titans automatically. 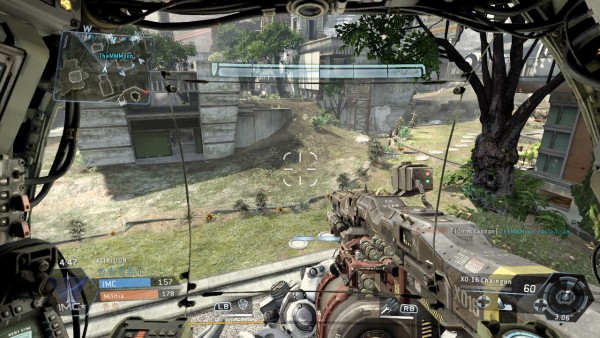 There are three different types of Titans with varying shields and speed. The Titan with high defenses has terrible speed, the Titan with high speed has terrible defenses, and then there’s a Titan that has average speed and defenses. Each Titan has their own special Core Ability that can be used after enough time passes by while piloting a Titan.

Just like Pilots, Titans have different weapons, ordnance, abilities, and kits. A loadout can be created before a match to give a little customization and variety to each player’s Titan.

Luckily, Pilots are not completely helpless when facing a Titan. A Pilot can use anti-Titan weapons to deal massive damage from a distance, or they can jump on a Titan’s back and deal extensive damage to a Titan’s weak point. The computer systems inside the Titan will warn the player whenever they’re being locked-on by enemy missiles or if an enemy Pilot is on top of their Titan to keep things balanced.

Titanfall is a multiplayer-only game, which means you’ll be spending all your time online against other players around the world. Although there’s only one section in the entire game (the multiplayer), the content is really lacking. There are a total of five game modes, none of which are new if you’ve played an online shooter before, and 15 multiplayer maps. 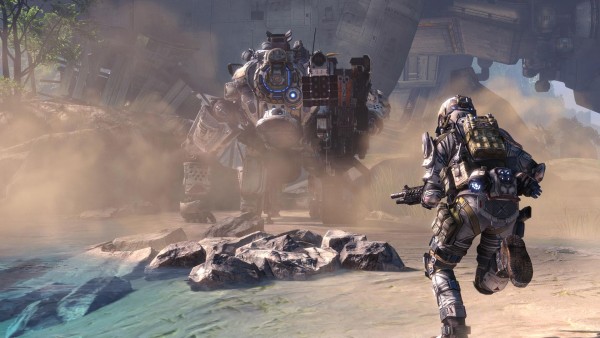 Each game mode allows six players to face six other players. In addition to real people, AI controlled combatants (bots) are added to each game to fill up a map. The bots are usually very weak and unintelligent. The only way they may take a real player down is if a player is on the brink of death.

As I mentioned earlier, the game modes have been done many times in other shooters throughout the years, but Titanfall adds a new feature at the end of each game called the Epilogue. The losing team must reach an evac point and escape on a dropship before it leaves. The winning team can use this time to clear out the remaining Pilots and even destroy the dropship before it takes off. It’s an exciting small twist to the same old modes we’ve played before. 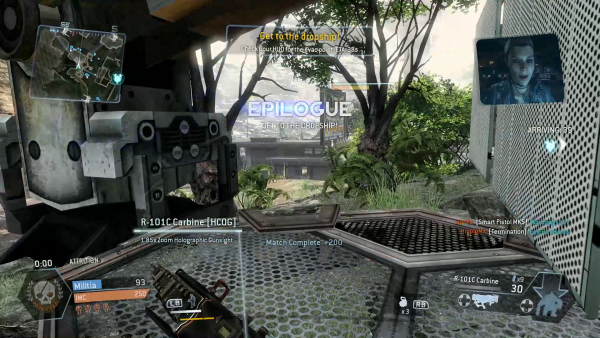 Another feature in Titanfall’s Multiplayer that isn’t common in other shooters are Burn Cards. These are single use upgrades and perks for Pilots and Titans that can be activated once at the beginning of a new life, and will only remain active during that life. They’re very useful and can help turn the tides during a game. Up to three Burn Cards can be brought into each match. 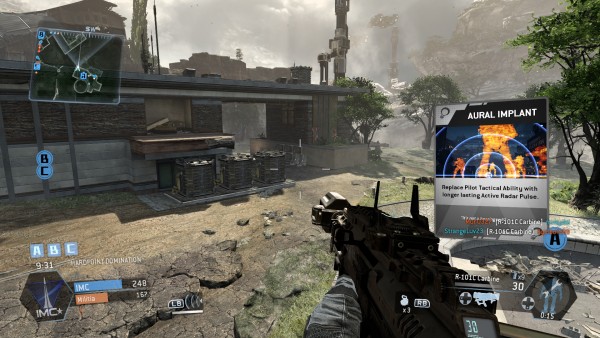 Experience earned in game goes towards each person’s rank. Ranks unlock new weapons, equipment, and abilities for both Pilots and Titans. Once max rank is reached, you can “regenerate” and reset all your unlocks. This allows you to unlock everything again to keep the game interesting. This is for the people who wish to play Titanfall for long periods of time.

While it’s true that Titanfall is a multiplayer-only game there’s still a Campaign in some form. The Campaign is basically an online playlist of nine specific maps and game modes. During these game modes you will see a variety of characters in the corner of the screen play out scenes related to the map. Although the story is kept to a minimum, it’s really hard to pay attention when you’re playing the game online against real people. Most don’t even know what the story is about even after playing the Campaign. The only reason people do play the Campaign is to unlock two Titan variants for Multiplayer. 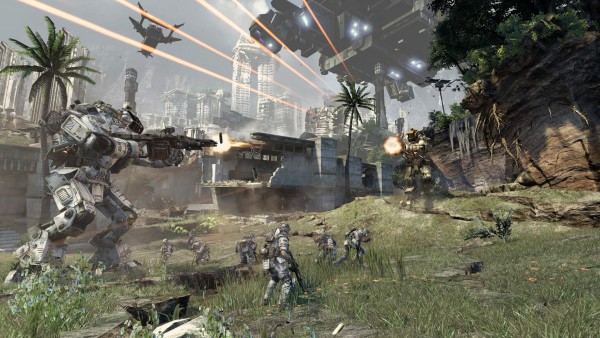 Titanfall has very little content to offer when compared to most new video games of the same price. That’s not to say the game is bad, in fact the gameplay is really fun. We’ve seen mechs in past games, but they don’t have the same fluid gameplay found in Titanfall’s Multiplayer. The game modes are the same as many other games, but there are a few new tweaks and additions to give this game its own aura.

If this game had a cheaper price point compared to most newly released video games, I would instantly recommend it. I wouldn’t advise buying this game full price expecting a wide variety of things to do. You’ll be playing Multiplayer, and Multiplayer only, on few game modes and maps. Again, the gameplay is great, but the content is really lacking. If you’re okay with that, then go ahead and pay full price. If not, I recommend waiting for the price drop to $30 or lower.