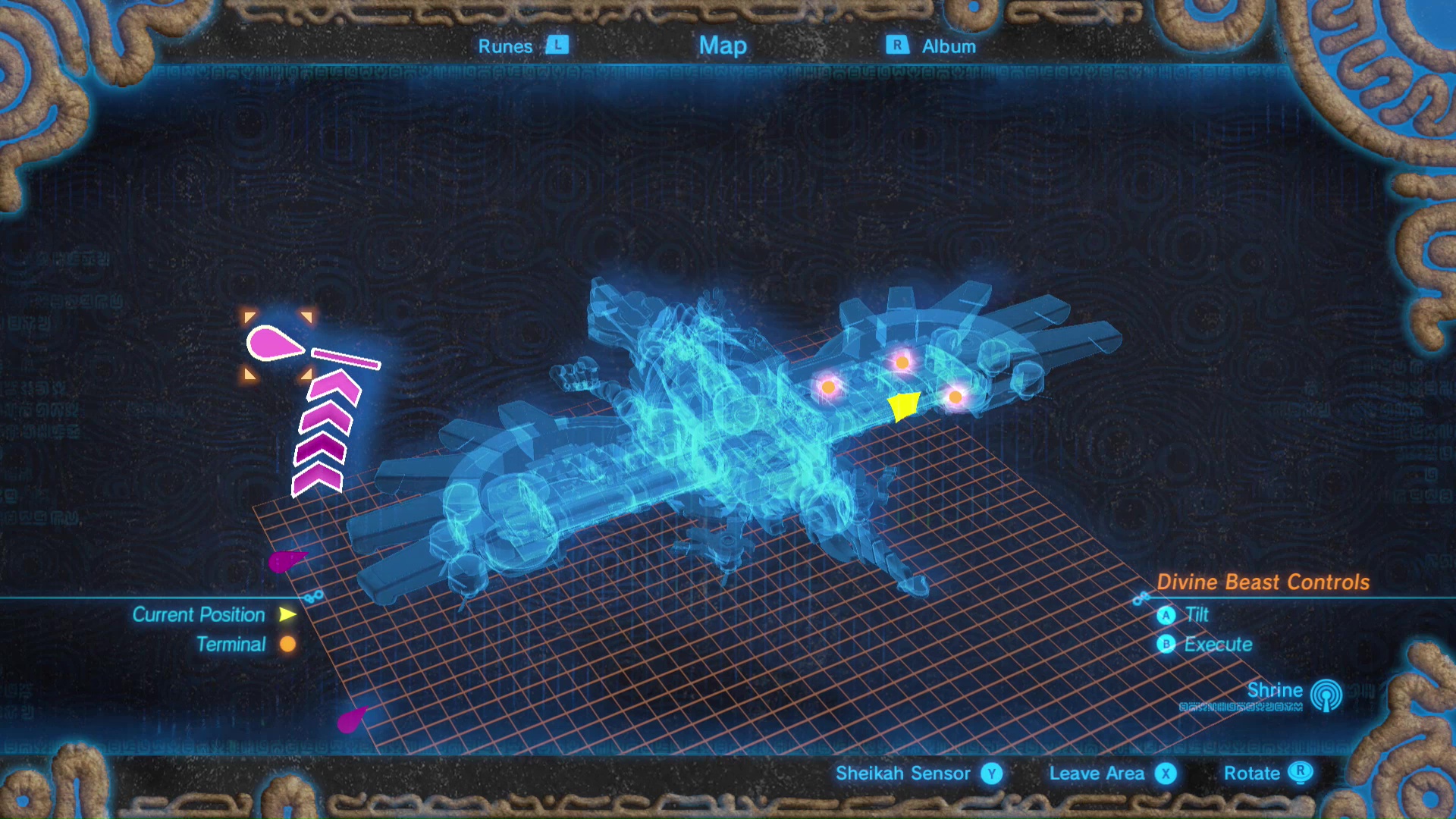 You will fly to Vah Medoh on the back of Teba. The objective here is to hit the Divine Beast’s cannons with bomb arrows. Teba will try to get the cannon to target him, but it might fire at you as well. You can let go of your glider and drop from the sky and avoid the cannon’s laser beam, but make sure you bring the paraglider back out so you don’t fall to your death.

Destroy all four cannons at all four edges of the Divine Beast to bring down its barrier. Teba will then fly you to the top of Vah Medoh. Immediately turn around and open the treasure chest at the tail end of the beast. A Sapphire should be inside if the items are not randomized. Shoot the eyeball to the right of the treasure chest to bring down the spiky malice barriers. There will be many like this around the dungeon.

Another treasure chest can also be found on the head of Vah Medoh. Travel along the top of the Divine Beast to reach its head where a Giant Ancient Core can be obtained.

Enter the Divine Beast and shoot the eyeball on the right side of the wall. This will bring down the malice spikes, allowing you to go deeper in.

Up ahead are large hanging blocks, some made of stone and some of metal. The magnesis rune can be used to move the metal blocks along their own tracks. Jump from block to block and make it to the other end, but be prepared for the Guardian Scout ahead. A single arrow shot to its eye should take it down.

The guidance stone is located on the other side of the guardian. Place the Sheikah Slate here to download a map of Vah Medoh, along with the locations of five terminals you must to interact with. Switch to your map to control the Divine Beast’s tilting capabilities. You will need to tilt Vah Medoh different directions to get all terminals.

You can jump down into the belly of the beast and open a treasure chest. Inside are 5 Bomb Arrows. Jump down another level and shoot the eyeball here to reveal a treasure chest with an Ancient Shaft inside.

One terminal is located on the right wing of Vah Medoh. Jump into the middle of the beast and take the open door to the outside. A small carriage can be found attached to a rail beneath the right wing. Walk inside this carriage and tilt Vah Medoh downward to reach the other end. If the carriage isn’t nearby, tilt Vah Medoh upward first to bring it toward you. Climb up the stairs and interact with the terminal.

You can return to the map and set Vah Medoh to be leveled for now. The door to the right will open after interacting with the previous terminal. Walk through the door and search above for another eyeball to shoot. This will destroy a mouth that keeps sending out skeleton heads. Destroying the eye will give you a treasure chest with 10 Ice Arrows.

Attack the glowing red switch in this room to open the window and activate the windmills. This will raise the gates that surrounded the large hammer. The objective here is to get the hammer to smash the button at the other end. Use stasis on the hammer, then attack it with a melee weapon to send it flying toward the button. Try attacking the hammer from the side instead of directly behind. This will open the gate to the second terminal.

Return to the middle of the Divine Beast with the hanging stone and metal blocks. The stone blocks will move along their rails when Vah Medoh tilts in either direction. Tilt the beast and freeze a stone block with the stasis rune just as it passes in front of the ladder above the area. Climb the ladder and grab the Ancient Core instead the treasure chest at the top.

Glide through the hole towards the Divine Beast’s left wing to enter a new room. Shoot the malice eyeball on the left wall to destroy the mouth that spits out skeleton heads.

Next, hit the glowing orange switch beneath the ramp to turn it blue. This will open a window and send in a gust of air. Climb up the ramp and use your paraglider to glide to the terminal that was blocked by the malice from earlier.

Nearby is a large window and gate that divides the room in two. A tube will connect the two rooms together. Use your bomb rune to send a bomb through the tube and into the other room. Make sure the switch from earlier is orange so the windows are closed! Tilt Vah Medoh upward to get the bomb rolling to the other end. When it reaches a rock wall, detonate the bomb to clear the path. 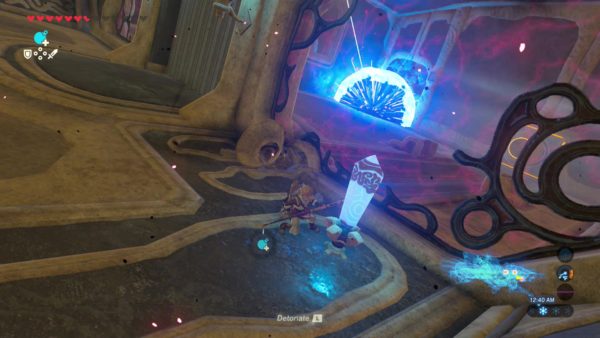 Tilt Vah Medoh downward to get the steel ball rolling toward the window. Use the magnesis rune to move the ball to the same track from earlier.

Tilt Vah Medoh upward to get the giant ball to roll to the other end and smash the button along the track. This will open the door to the second room where another terminal can be found.

The final terminal is on the left wing of Vah Medoh. Unfortunately, the path from the belly of the beast to the left wing will be blocked by malice. Tilt Vah Medoh upward and glide through the small hole to the far end terminal.

Return to the main body of the Divine Beast by tilting Vah Medoh downward and gliding back. Use the updraft in the middle of the body or on the nearby shoulder along the outside to fly to the top of the divine beast. Interact with the main control unit here to begin a boss battle.

Windblight Ganon will attack with a multi-shot laser cannon. It can also summon tornadoes that will twist around the area.

Use the updrafts from the vents on the top of Vah Medoh to dodge his attacks and fire your bow from different angles. Hit Windblight Ganon directly in its eye with an arrow to send it to the ground, then try to use stasis to keep it down long enough for you to run over and attack. If you still have bomb arrows, now would be the time to use them.

Once Windblight Ganon’s health has fallen to 50%, he will summon five reflectors. These will bounce and multiply his laser cannon between each of the flying devices.

Use stasis on Windblight Gannon to stop and hit these reflectors with an arrow. A single shot will destroy them, and they’re easier to hit when they open up and prepare to reflect the laser beams. Destroying the devices will not injure Windblight Ganon, however. You will still need to attack him the same way as before to end the battle.

Defeat Windblight Ganon to receive a heart container. Interact with the main control unit once again to leave the Divine Beast and activate a long cut scene. You will now be able to use Revali’s Gale. Hold the jump button to activate this champion power and send Link flying high into the air. The Divine Beast Vah Medoh will also set his aim on Hyrule Castle, weakening Calamity Ganon.

Speak with Kaneli in Rito Village to end this quest. He will reward you with a treasure chest containing the Great Eagle Bow. This bow will turn one arrow into three without using more arrows from your inventory!