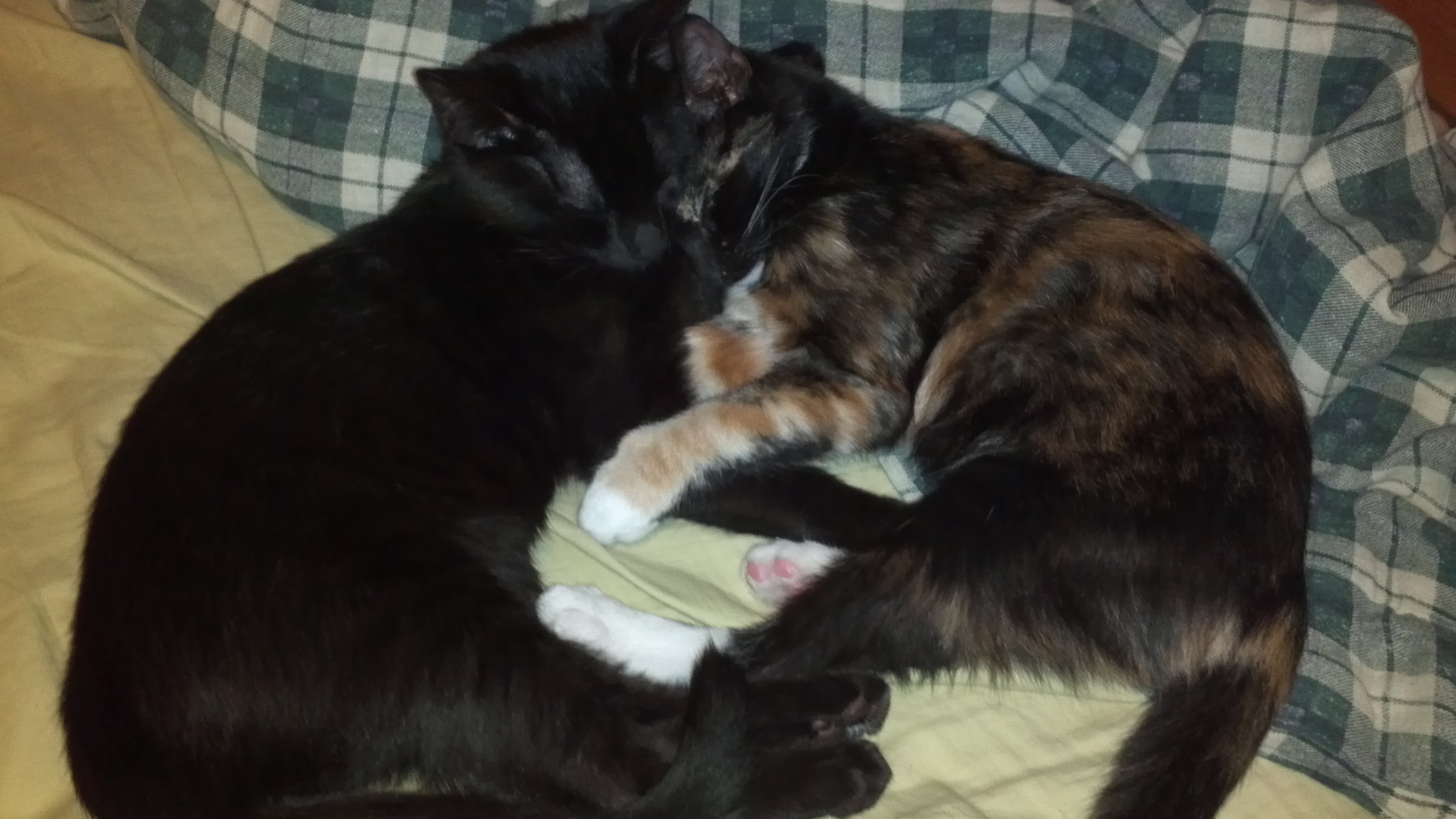 The Daily Lives of Cry Baby Salem and Mr. Whiskers

This story goes out to my cats, Cry Baby Salem and Mr. Whiskers, wherever they might be. I’m thinking about making this into a series, but who knows what will happen in the future.

Life can be tough sometimes. Eating the right food, getting the required twelve hours of sleep, and trying not to get eaten by dogs. These are the things we have to look out for every day. Oh, did I mention I’m a cat? They call me Mr. Whiskers. I’m a calico cat. Mostly black fur with orange spots on my back, and I have a white belly and paws. I think they gave me this name because I have really long, white whiskers which stand out against my dark face. Personally, I think I’m the cutest one of the litter. Most of my brothers and sisters were given to other families, but I remained in the home I was born in alongside my brother Salem. Salem is a big black cat. Most people are afraid of him because he’s black – superstition and all – but he’s actually a big cry baby.

Despite what some think, it’s not always easy being a cat. I’m not saying we have it as hard as the cats out in the wild, but it’s not all cat nip and belly rubs here either. Speaking of which, just because you want to pet us doesn’t mean we want to be pet! Sometimes we need time to ourselves. If you need that much affection, get a dog. On second thought, don’t get a dog. Just be patient and leave out some tuna every once in awhile. I mean imagine eating the same hard, dry food every single day. A little variety goes a long way. That’s just a couple of things cats must struggle with in our daily lives.

I know what you’re thinking, “we have it hard too,” right? Many kids think they have tough parents, but once I reached six months old, Mama Kitty didn’t want to be around me and my siblings anymore! She was always hissing in our faces, telling us it’s time to grow up and experience the world outside. I remember the first time my brother and I went outside. I remember seeing the tall, cushy green grass. There were small bugs jumping around from blade to blade. I wanted to catch every single one! And seeing the sky for the first time, it was an amazing sight to see. Of course, my brother Salem was crying to our papa, and wanted to go back inside. After a short while, he began to enjoy the outside for what it was, but he still likes being around our papa indoors more than any cat I know.

The toughest part of being a cat has to be the dogs. Humans that live in cities are pretty much outside of the food chain, but us cats are still very much a part of it. Luckily, we’re much more agile and smarter than dogs. Not all dogs are bad, of course. Some are incredibly friendly. Some cats that grow up with dogs understand their language a little bit. Speaking with another animal is sort of like a human learning a foreign language. It takes effort, and some canines would rather eat you than talk to you.

Of course, the life of a cat is not all bad. Most days are spent relaxing on a roof top; sleeping in an enclosed area, like a small box; running away from dogs, as I mentioned earlier; or just hanging out with my other feline folks. Haven’t you ever wondered why you see so many cats together in a single place? We usually team up to form a small cat society that runs the neighborhood. A lot of information is passed around, such as which house leaves out the best food and water. We also mark the yards with dogs in them to make sure we steer clear. Don’t ask how we mark them, you probably don’t want to know. Unfortunately, if one cat ever gets in trouble, the others run away as fast as they can! A bunch of scaredy cats they are! I know I’ve called my brother a cry baby, but one time he saved my life. I’m just a small feline girl – yes, I’m a girl even though my name is Mr. Whiskers. One day a big dog cornered me and started growling and baring his teeth. Out of nowhere, my brother Salem came in and scratched that dog until he went home whimpering! Salem might cry and want to be around papa a lot, but he is also a pretty big cat with big claws. If he ever sees his little sister in trouble, he’ll be the bravest cat you’d ever see, and I’m glad to have him as a brother!

There’s a lot more to being a cat, but that will have to wait for another day. I think Mama Kitty is expecting. Soon I’ll have even more brothers and sisters. Salem and I will have to teach them what it’s like being a cat in this neighborhood.