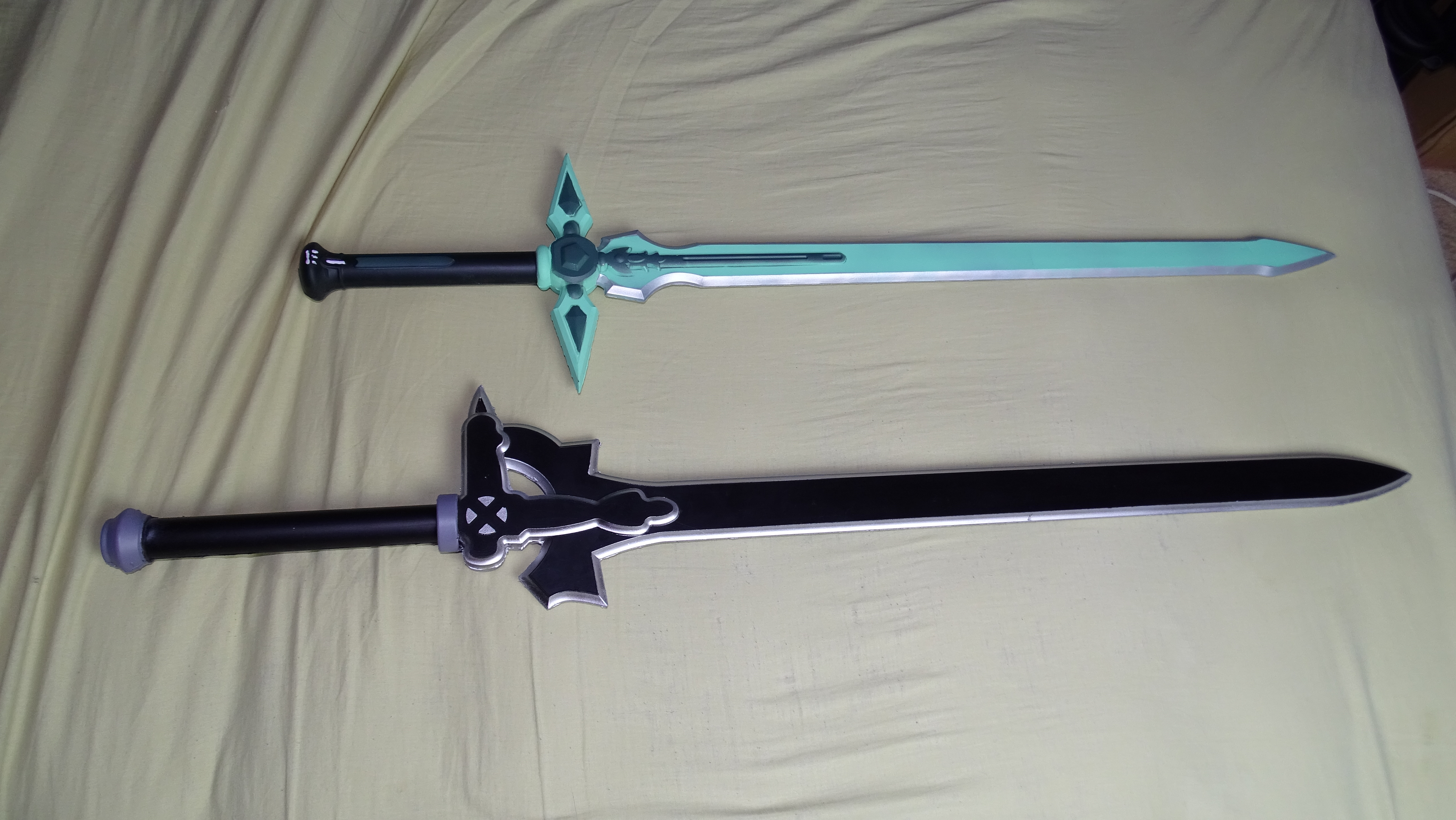 These Sword Art Online Elucidator and Dark Repulsor foam swords have some positives and negatives. Let’s take a close look.

I started getting into cosplay in the middle of last year. One of my cosplays was of Kirito from Sword Art Online. I didn’t want just a costume for this cosplay, I wanted some cool swords to pose with. Before purchasing some, I looked at the rules for the convention I was planning on going to. They said I could carry steel swords, but I wouldn’t be able to take them out of their sheaths or anything like that. Foam swords on the other hand could be used without any trouble. Also, foam swords are a lot cheaper than steel! I bought these swords from Amazon around August. At that time they were $70 for the set! Now they’ve dropped down to a more reasonable $40.

First up in the Elucidator. This sword is 42 and 3/4 of an inch long, which is about 108.5 cm. The blade itself is 2 inches wide and 0.6 inches thick. In metric, that’s 5 cm wide and 1.5 cm thick. I really like how its designed. Some parts are raised just like the anime, but there are a lot of extra foam pieces around the edges. The paint job is decent, though nothing spectacular. Something I should note is the lack of a cross or any sort of symbol at the end of the blade. A lot of pictures on shops have that cross symbol at the end of the blade but don’t always include it on their product.

Second is the Dark Repulsor. This sword is 37 and 3/4 of an inch long, which is 95.8 cm. The blade is 1 and 3/4 of an inch wide and 0.6 inches thick. In metric, that’s 4.5 cm wide and 1.5 cm thick. Just like the Elucidator, the Dark Repulsor is raised at some sections, giving it a better look, but the paint job is really horrible. It looks like it was done by a ten year old. There are also some tiny foam parts at the edges, just like the Elucidator.

Both swords are made out of a thick foam, and are incredibly lightweight. It seems like the foam on the Elucidator is a bit softer than the Dark Repulsor, but maybe that’s because the Elucidator is bigger and has more foam away from the core. You can play fight with these a little, but I wouldn’t get too rough or they would probably break. And I would never try to bend it the same way they show in the amazon image.

These foam swords have their ups and downs, but if you’re going to a convention and want some props for a decent price, I’d recommend them! If you’d like to buy the set for yourself, grab it off of Amazon using my link below. If you use my link, I’ll get a small kickback to help power my website and YouTube channels. Don’t worry, it won’t cost you anything extra!