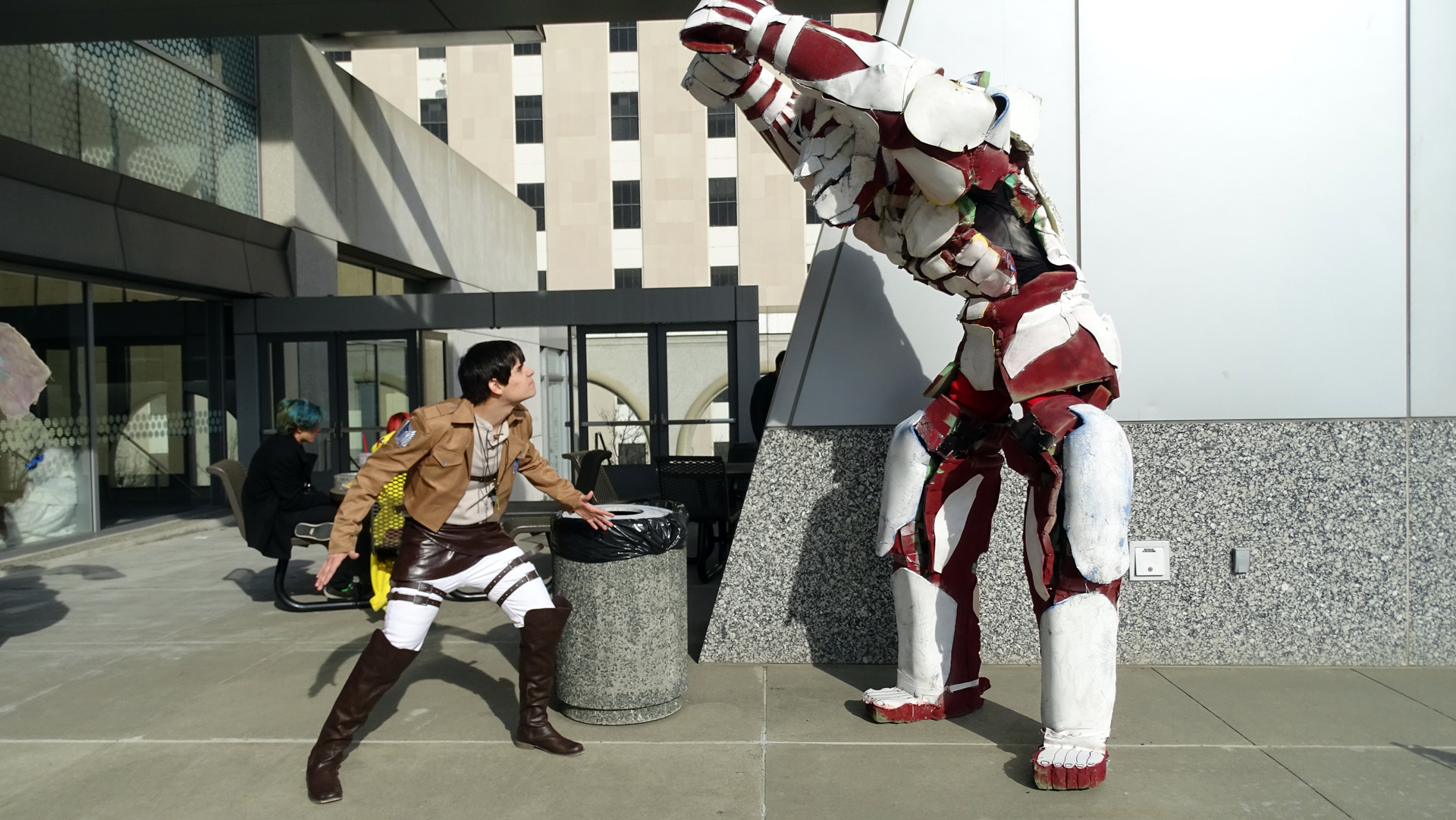 I’m back from SacAnime with pictures and my personal experience!

I had both a great and terrible time at SacAnime. Luckily, the terrible time was because of illness and not anything related to the convention or the great people I met! Well, some people that were supposed to buy a few of my items did flake, so that was the only downside related to people. Videos are coming soon on my Otaku YouTube channel. Subscribe if you want to see them! I’ll also be posting pictures on my Facebook page if you want to tag yourself.

This time around I wanted to be in more pictures with other cosplayers, so I asked random people to take pictures. Looking back on the pictures, I think I should have been in less pictures, and brought more props to cosplay with.

For those that don’t know, SacAnime is an anime and pop culture convention in Sacramento, California. There are two each year, SacAnime Winter in January and SacAnime Summer in September. This was my second convention ever, and my second SacAnime. A ton of people cosplay, there are various panels and events at the convention center, video game rooms at the nearby hotel, anime viewing rooms also in the hotel, and there’s a massive room where you can buy so many goodies. It lasts for three days, but you can go on “day 0” before the event and register early.

I arrived on the Amtrak from Lodi around 1 PM on December 31st, New Year’s Eve! I checked into my hotel room at the Sheraton. Last time I stayed at the Holiday Inn just two blocks from the train station. It was an okay hotel, but it was a mile away from the convention center! The Sheraton was right across the street from the convention center and even had a few activities in the lobby. A relaxed for a bit while I waited for registration to open around 3 or 4 PM (I can’t remember). There was no one around except me and a Power Ranger. 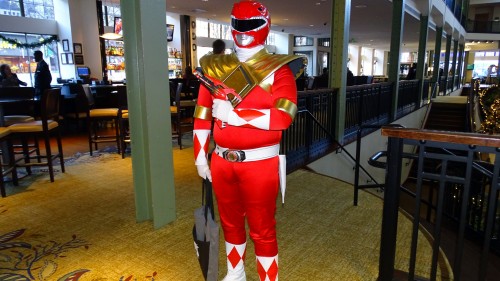 It was just about time to register when my sister came into town with my extra luggage. I couldn’t carry it on the train and they were coming in for a New Year’s Eve Party. I had to go out and get my stuff, take it up to my room, and go back down and get some other stuff she forgot to give me the first time! When that was all done, there was a huge line to register. I always get antsy and stuff in lines, so I went up to my room and waited about an hour. By then the lines were cleared and I was able to get my VIP pass and goody back. The voice of Jack Skellington from The Nightmare Before Christmas was at the convention, so the free tote bag and the wrist band had a picture of the character on them. They also gave out some posters to VIP members. I also met up with a Facebook friend and talked a bit. 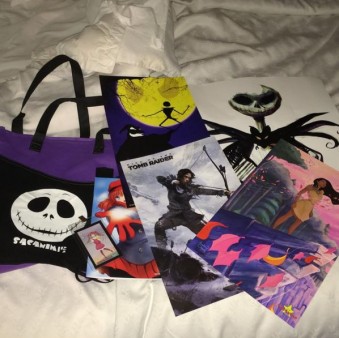 Since it was New Year’s Eve, SacAnime threw a small party in two of the ballrooms at the Sheraton. The party was only from 10 PM to 12:30 AM. I was pretty tired after I registered, so I slept until 11 PM. Most of the people at the party left shortly after midnight. I danced until 12:30 AM when they turned on the lights and shut off the music. I wish it lasted longer, but I still had a great time.

I woke up pretty early on Day 1. I was Red from the Pokemon Special manga. I cosplayed as Red during SacAnime Summer 2015, but this time around I did my hair a bit differently, used some makeup, and used my Pokedex and Pokeball in photos. This is what I looked like in the hotel. 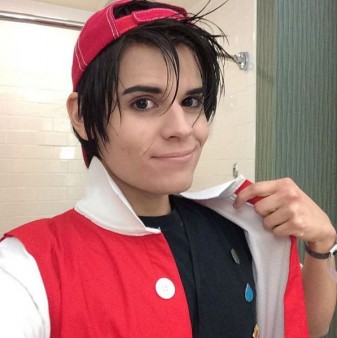 I didn’t look quite as good in photos other people took throughout the day. It was partly because of lighting, my hair getting a little messed up, and my makeup smearing a bit. I’m still new to makeup. I went to the convention center around 10 AM. It was way emptier than I was used to. A photographer asked to take pictures of me, but it was probably because there were so few people. Ha ha. It was still cool! 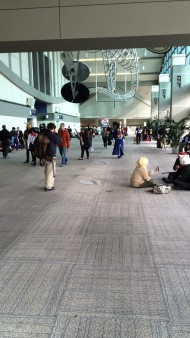 We had a Pokemon gathering scheduled that day, but it wasn’t in the programming guide, nor was it printed on the posters around the convention. Because of that, only a handful of people showed up. I still got a number of great pictures at the gathering and throughout the day. The best was meeting a girl who cosplayed as Yellow from the Pokemon manga. It’s rare to find cosplayers who have read the Pokemon manga. I ended up running into her and her friends again at the end of the night in a Subway restaurant.

The exhibit area, where they sell all the merchandise, had even more awesome cosplayers. I saw a Ninja Turtle and Rita Repulsa! The guy who cosplays as Doctor Who with his TARDIS returned, but I didn’t take pictures of him this time around. I ended up buying a Pikachu dressed up like a Mega Charizard Y, a Hatsune Miku Nendroid, and a Kill La Kill figure. 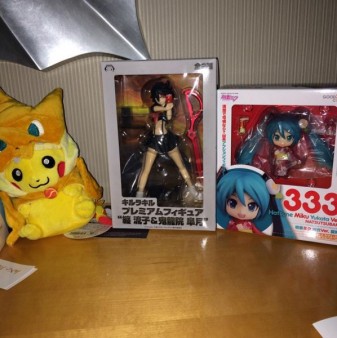 I felt sick the entire second day. I’m not sure if I caught some 24 hour bug or if it was something I ate. I stood in my room most of the day. I missed out on the YouTube gathering which I was looking forward to the entire trip! My Otaku YouTube channel is only a year old and I wanted to network and maybe get some people to collaborate with.

I ended up going out around 5 PM. I cosplayed Kirito from Sword Art Online. It was a bit late, but I realized my costume sort of stunk. To those whom I took pictures with, I’m sorry if I didn’t smell that great! ^_^; I brought two foam swords to the hotel for pictures at the convention, but I had a bag to carry around and I was still feeling sort of ill. I decided not to take them with me. 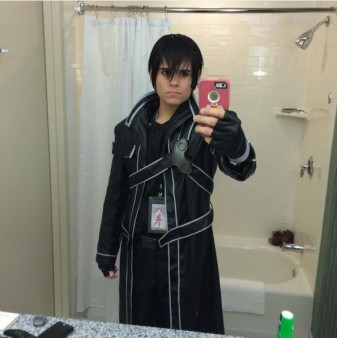 I met up with the guy who was cosplaying as Cubone the first day. He was an excellent Master Roshi on the second day. I walked around a bit before going to the Cosplay Masquerade. A lot of people seemed disappointed in it on the SacAnime Facebook group, but I thought it was fine. Yes, there were some technically difficulties (like two or three), but I didn’t expect a highly professional set up. Everyone participating was an amateur, so I didn’t expect them to hire super professional technicians or what not.

If you’re unfamiliar with the Cosplay Masquerade, it’s a short event where cosplayers put on short sketches. Some sing, some do action sequences, and some do comedy. After the skits, a number of cosplayers walk on stage and pose in their cosplays. That’s about all there is to it.

I wanted to go to the rave at 10 PM that night, but I was still feeling a little ill and tired. I ended up going back to the hotel and sleeping shortly after the Cosplay Masquerade.

I was feeling much better on the third and final day of the convention. I cosplayed Eren Jaeger from Attack on Titan. Before I could start, I had to cut  my incredibly long hair to fit the style. I was due for a haircut anyways, and my natural brown hair started poking out from my dyed black hair. Here’s a series of instagram picture, before the haircut, after the haircut, with one contact in, and with makeup done.

The contacts felt horrible. The last pair of circle lenses I bought felt great. I bought these contacts from a local beauty shop and they irritated my eyes from the moment I put them in. My right eye still feels a little irritated one day after. I had planned on getting prescription circle lenses, but I still haven’t gone to the optometrist to check my eyes. I tried using eyedrops, but it didn’t seem to help. It only smeared my makeup and made me look more like Levi with those bags under my eyes!

Since I stood at the hotel most of the second day, I tried going around and taking a ton of pictures the third. I took pictures with other AOT cosplayers, including the armored Titan, a Mikasa / Mi Casa cosplayer, and a “generic dead anime mom.” Sometime during the day I accidentally switched the camera mode. Some pictures came out way too bright. It ruined a picture of a great Mad Hatter cosplayer.

I took a number of pictures of the InuYasha gathering since InuYasha was the first anime I seriously got into. There was a teenage girl there who seemed to love the show more than anyone else at the gathering.

My two nephews and my older sister came with her boyfriend to the convention for a few hours on the final day. They took pictures with a Deadpool X Dog cosplayer and some Power Rangers. They also played a ton of video games at the Kids Room. I didn’t even know they had a Kids Room! There were many old and slightly recent consoles like the Sega Genesis, NES, Super NES, 3DO, Dreamcast, Gamecube, PS2, and more. They said they had a great time and would like to comeback again.

The train was packed on the way home. Thankfully my sister took most of my luggage with her in her boyfriend’s car. I was pretty sad to comeback home, just like last time. I came home to three packages that I needed for more YouTube videos. I have so many videos planned out and so little time before the next semester begins. I would like to go to the next SacAnime, but I don’t have much extra money to spend. I also want to go to a BABYMETAL concert this year whenever they give the date for the west coast! 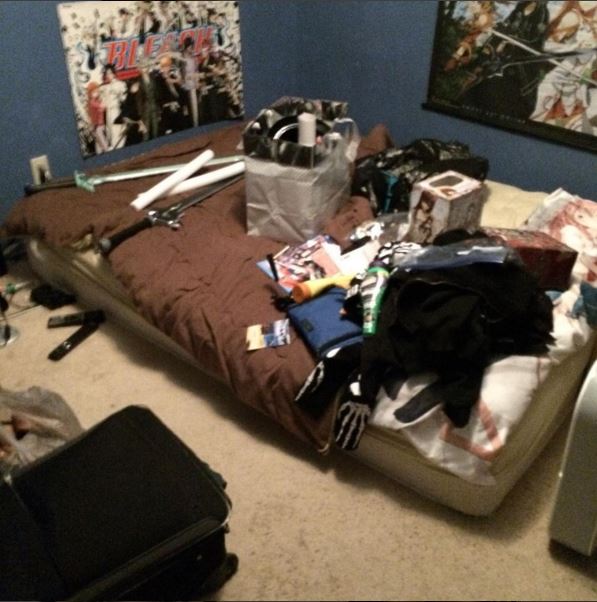 That’s all for SacAnime Winter 2016. I hope this year was as great as the last. Remember, I’ll be posting videos soon on my YouTube channel with even more awesome stuff from SacAnime that I didn’t post here. Stuff you need to see and hear on video as opposed to still pictures.