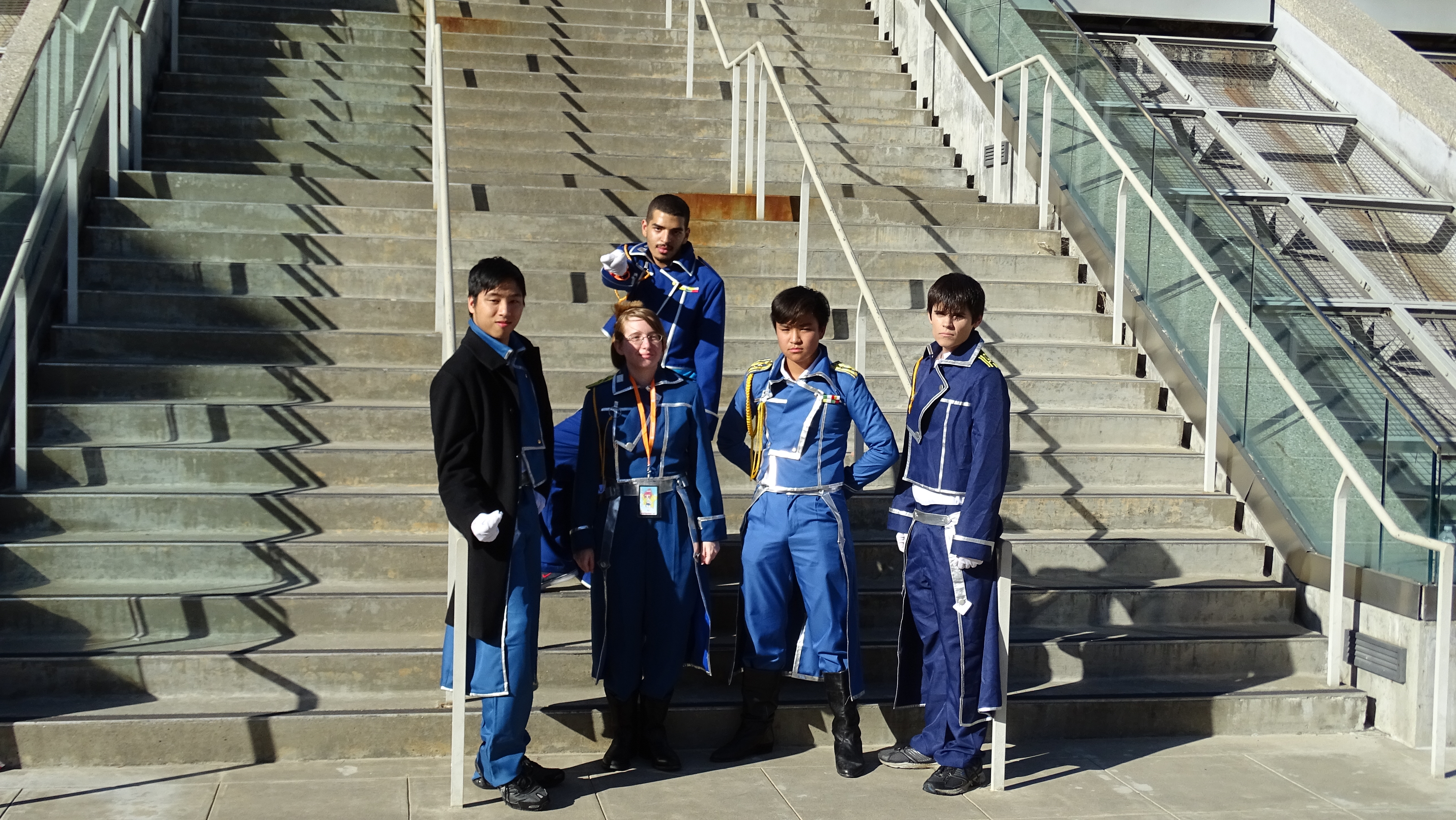 My Roy Mustang Cosplay from SacAnime Summer 2016 had some positives and negatives. More info in this cosplay log.

Roy Mustang, the Flame Alchemist, has been one of the characters I’ve wanted to cosplay since I started in 2015. However, it was not among the first set of costumes I purchased. I did think about buying the costume during SacAnime Winter 2016, but they didn’t have my size at the time. Once SacAnime Summer 2016 came around, I immediately went to the exhibit area the first day to look for a costume my size.

I bought a costume in a size large (Asian sizes) and brought along my black boots from my Kirito Cosplay. The costume includes a coat, a pair of pants, and a skirt-type thing that goes around the pants. The costume isn’t enough to complete a Roy Mustang (or any other state alchemist) cosplay.

Next, I needed to find a pair of flame alchemist goves. I tried really hard to find gloves to match the costume, but nobody seemed to have them in the entire exhibit area. I asked the SacAnime Facebook group if anyone had an extra pair of white gloves, and was able to get a pair within a few minutes from someone else staying in the same hotel. I was super lucky and grateful! Plain white gloves was better than nothing, and maybe some day I’ll draw on the transmutation circle myself.

Beneath the costume I wore a simple colored white shirt, as Roy Mustang does. The only difference is my shirt was short sleeved while Roy Mustang’s is often long sleeved. Next time I should probably hike up my pants the way they do in the anime. The coat is supposed to be short, but not quite that short. The legs are often longer on characters than the torso.

I forgot to buy a state alchemist watch the first time around the exhibit area. While looking around later on, I was able to find a watch that was good enough. The outside looked just like the state alchemist watch from the series, but the inside was really flawed compared to Edward Elric’s watch. Of course, if you’re doing any other state alchemist, you don’t need to open the watch anyways.

The “etching” inside the watch is popped out inside of etched in, and is in a font that looks nothing like a carving. It also has the wrong date when compared to all three series. The original FullMetal Alchemist anime had 3.oct.10, the manga had 3.oct.11, and the FullMetal Alchemist Brotherhood anime had 3.oct.11 as well. For some reason, my watch has 3.oct.1111. Also, the watch face is the wrong direction. The XII is on the right hand side instead of the top, and the second hand is in the middle of the watch like most watches instead of being a smaller second hand at the bottom of the watch.

As you can see, I still have a lot of tweaking to do for this cosplay which I might add to later versions of this post. This was the first time wearing the costume, which means I have a lot of room for improvement!

If you want to buy a state alchemist costume yourself, you can grab one off of Amazon below. Again, I purchased my costume at a convention, so this might not be the exact costume as the one I got. Use my link and I’ll get a small cut. It won’t cost you anything extra, and it will help power my website and YouTube channels.