Are you looking into Rosetta Stone to learn Japanese but are put off by the price?

I’ve been using the Japanese version of Rosetta Stone for over three years now. I was very determined to learn Japanese the best and quickest way possible, so I made the leap and bought this pricey software. Here’s my Rosetta Stone Japanese review.

There are three levels available in Rosetta Stone Japanese. For some reason they decided that you can buy level one by itself or levels one, two, and three as a package. You cannot buy levels two or three alone, and you cannot get some sort of discount for already owning level one. Each level has four units, and each unit has four lessons. The lessons consist of a core lesson, pronunciation, vocabulary, grammar, listening and reading, reading, writing, listening, speaking, and a review. The software gives you an estimated time frame for each section. A core lesson is usually about thirty minutes. The other assignments vary between five and fifteen minutes. The reviews are incredibly short at only five minutes. 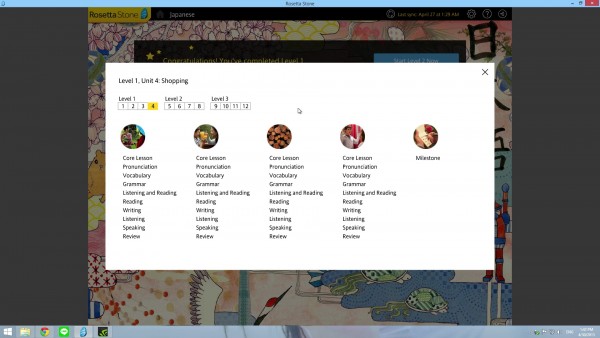 As you can tell from the lessons, Rosetta Stone requires a keyboard, mouse, speakers, and a microphone. You will do a lot of reading and speaking, but there isn’t a lot of writing to be done until later lessons. In the early lessons, they try to teach you hiragana and katakana in the writing assignments. You must click on the correct character after the sound is made. 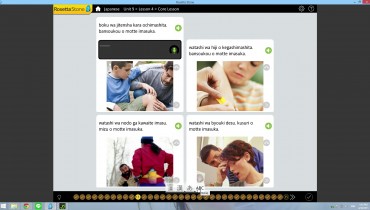 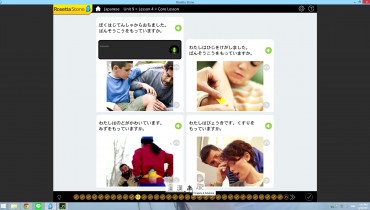 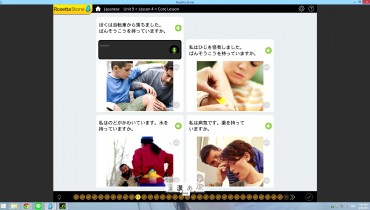 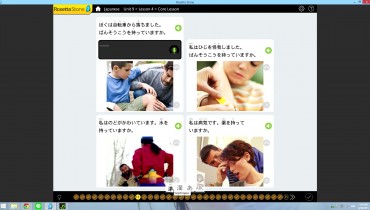 This method is great since you associate a word with an image or sound instead of a Japanese word with an English word and then the image. It cuts out that translation section in your mind. But this method can be a bit troublesome if you don’t quite get a word in a lesson. You can always use a translator to figure out a word, but if you can’t understand a sentence at higher levels after enough repetition, translators may not be of use. 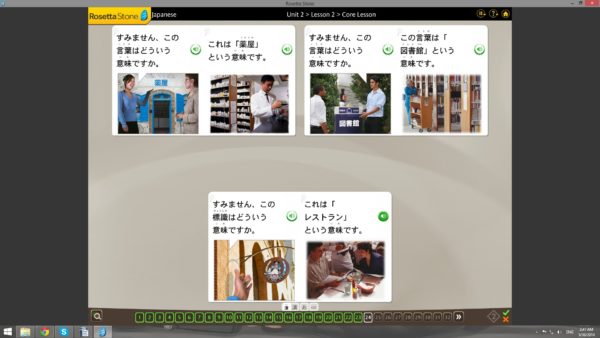 Sometimes you have to pick a correct word or sentence, sometimes you have to choose the correct image to the sentence, and sometimes you have to say the correct sentence. Speaking can be easy at times since they give you examples before it’s your turn to speak. However, they don’t always give examples and expect you to say the right sentence. As with any other language, there are many ways to say a sentence. Rosetta Stone may want a complete sentence or a quick response, and you just have to guess at what they want. You get two tries at speaking before the software marks your response as incorrect, but you only get one shot at non-speaking sections.

The writing is the worst part of Rosetta Stone. In Level 3, Rosetta Stone asks you to write out the Japanese words you have learned using the English alphabet. There are a few problems with this. For one, Japanese doesn’t use any spaces. Rosetta Stone wants you to use spaces and they sometimes choose unusual points to add or to refrain from using a space. Also, there are some Japanese characters that are pronounced differently than they are spelled when using most Japanese keyboards. For example, there is a character spelled HA (は), and it is pronounced HA some of the time, but other times it’s pronounced WA. Rosetta Stone wants you to type WA instead of HA in those instances. Same goes for a character that is spelled WO (を) but pronounced O. Lastly, in Katakana you have to add a bar to extend a vowel sound. Rosetta Stone doesn’t use these bars in the writing assignments, so they want you to add two of the same vowel. An example is my name in Japanese. I would spell it hekuta- (ヘクター), but Rosetta Stone would want me to spell it hekutaa. 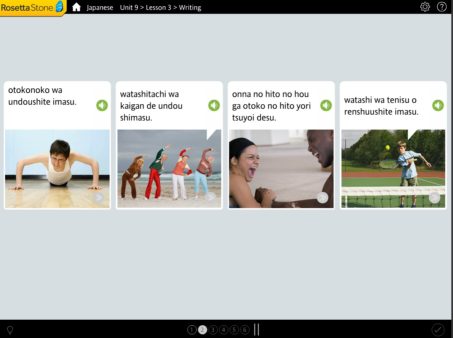 Once enough time has passed, the software will give you an assignment called “Adaptive Recall.” This lesson is basically a refresher for earlier assignments within the same level. 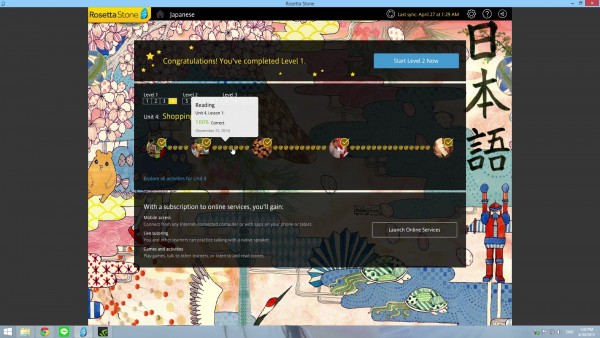 After all four lessons in a unit have been completed, you must take the unit milestone. This is basically a review of all the lessons, but it’s set in a real world scenario. The software gives you images and speaks to you. You must then say the correct response to get the answer right. This can be a bit tough since there are so many ways to say something, but the software only wants one specific response.

I should note that Rosetta Stone wasn’t the only product I used to learn Japanese, but I can easily say it helped me remember and learn with the most ease. Yes, there are some downsides to this software, and the price is definitely one of the biggest downsides (especially if it goes above $170), but there is a lot of good as well. Just like with all other forms of education, you will only get out as much as you put in. Study daily and you will learn faster. Make sure you are incredibly focused while studying instead of trying to get to the end of the lesson to retain a lot more information. I definitely recommend this software, but I also recommend speaking with native Japanese speakers in addition to this. It’s always good to have supplementary education.