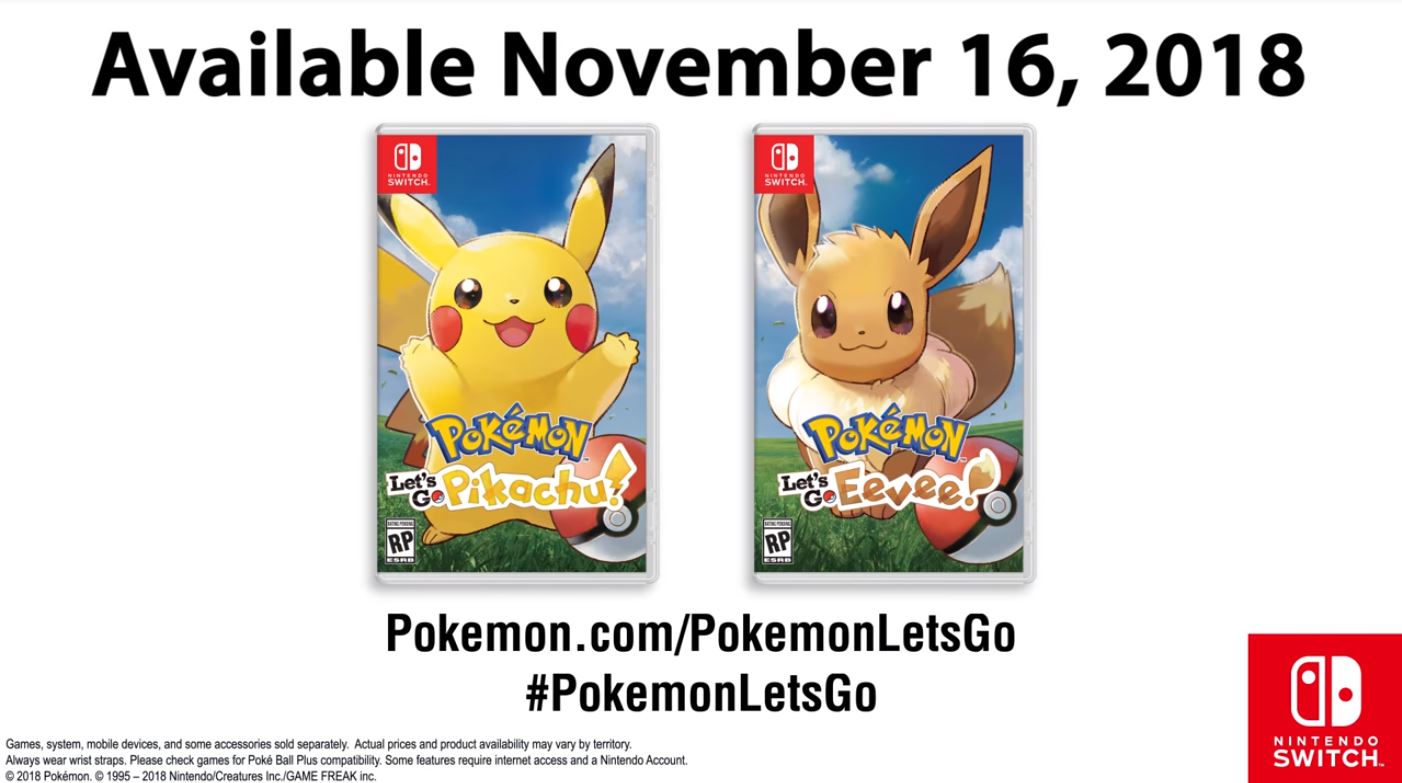 The very first Pokemon RPGs for the Nintendo Switch have been officially revealed. Here’s what I’ve discovered from the trailer.

Last year we were told by Nintendo and Game Freak that a new, full-length Pokemon game will be coming soon to the Nintendo Switch. Today, they released the first official trailer for the two newest Pokemon games set to release on November 16th. They’re called Pokemon: Let’s Go, Pikachu and Pokemon: Let’s Go, Eevee. I recommend watching the trailer in its entirety before continuing on with the article.

Okay, that was a lot to take in, and I’m sure you’re all as excited as I am! You can see how much the Pokemon Company is trying to spin Pokemon Go into a full-length RPG on the Nintendo Switch while remastering Pokemon Yellow: Special Pikachu Edition. Here’s what I found so far… 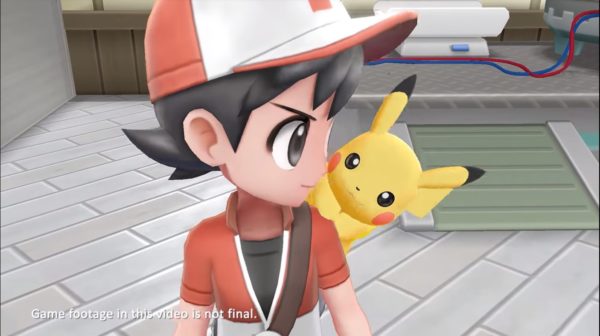 Pokemon: Let’s Go, Pikachu and Pokemon: Let’s Go, Eevee are both set in the Kanto region. This was the location of the original Pokemon Red, Blue, and Green. It was used again in Pokemon Yellow; the Gold, Silver, and Crystal sequels; and subsequent remakes. You’ll be able to explore some familiar areas, meet familiar faces, and capture everyone’s favorite gen one monsters.

Based on the actual name of the games, it would seem an online leak was accurate once again. You will be able to start your adventure with either an Eevee or a Pikachu. The starter is based entirely on the game you purchase, according to Pokemon.com[n]. Both Pikachu and Eevee have the ability to follow their trainer outside of their Poke Ball, and they can be dressed up just like Pokemon Trainers in recent 3DS version.

The way to catch Pokemon has been completely redesigned, and each Pokemon now has CP (Combat Points) just like the creatures from Pokemon Go. Will this stat system be a new addition to the EV and IV system of the past five generations, or will this completely change the stat system once again? We’ll have to wait and see. 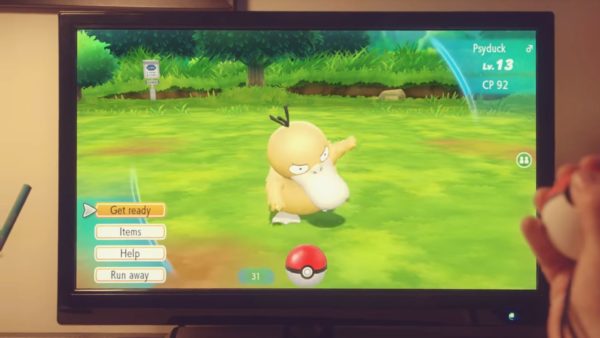 In these games, a Poke Ball can be thrown by selecting the ‘Get ready’ option from the main menu and using the motion controls of the joy-con. Again, this is a similar feature to Pokemon Go, and the Poke Ball had to be thrown just right to capture the monster. Additionally, Pokemon Go was tied to the Pokemon Go Plus–a bluetooth wristband that is used to throw Poke Balls at Pokemon in-game. A new accessory–the Poke Ball Plus–can be used in similar fashion with Pokemon: Let’s Go, Pikachu and Pokemon: Let’s Go, Eevee.

Pokemon can even be sent from the Nintendo Switch to the Poke Ball Plus accessory and taken for a stroll. Could we see the return of the PokeWalker features from Pokemon Heart Gold and Soul Silver? If so, we might be able to unlock more secrets or special moves by using this device. 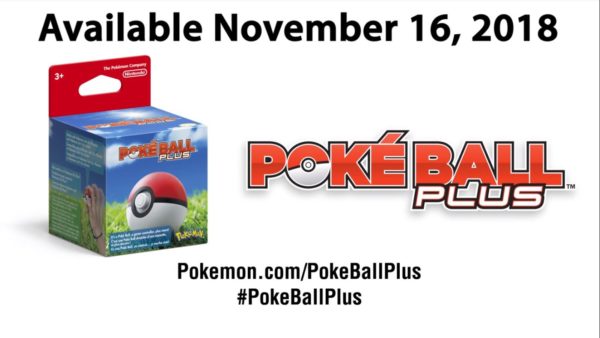 Continuing with the Pokemon Go theme, the trailer shows the ability to send Pokemon from Pokemon Go to Pokemon: Let’s Go, Pikachu and Pokemon: Let’s Go, Eevee. However, the Pokemon are sent to something called the ‘Go Park.’ This appears to be another system similar to walking Pokemon in the DS versions of Pokemon Heart Gold and Soul Silver. While walking Pokemon, you were sometimes able to find item while increasing the Pokemon’s happiness.

A feature we can be glad is not coming from Pokemon Go is the battle system. Pokemon battling appears to be the same as past RPG games: turn based battling with four attack slots for each Pokemon. While tall grass is still visible in the game, we can also see Pokemon freely roaming around the map. Walk into these Pokemon to begin a battle with them, but does this mean random encounters are out all together? This can make it easier to find certain rare Pokemon to fill up your Pokedex, but how are they randomly generated on screen?

One of the coolest things from the trailer was the new ability to play co-op. Haven’t we all wanted to go on a Pokemon adventure with a friend? Now we can! Simply shake the second joy-con on the Nintendo Switch to bring a second player on screen. Two players can explore the same area and even team up to capture Pokemon. How this will work is beyond me. Will this clone Pokemon for a second profile, or is the co-op profile only a guest profile that won’t have its own Pokemon and Pokedex? Based on this trailer, co-op mode allows you to battle in-game trainers in handicap matches. If you thought Pokemon was easy to beat before, now you can have two on one battles against the AI!

One more thing I noticed was how the main characters were able to ride on Onix, Lapras, and Charizard throughout the game. I’m going to guess this is the return of the Poke Ride feature from Alola in Pokemon Sun and Pokemon Moon. This replaced the annoying HMs (Hidden Machines), which allowed Pokemon to interact with the environment around them, but jammed up one of the four precious move slots. 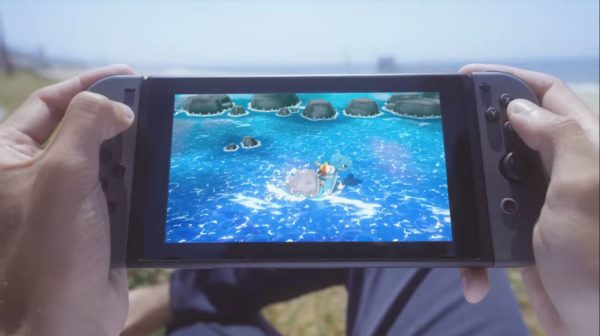 Is this the future of Pokemon RPGs or will this only be a Pokemon Go RPG Spin Off? Since this is just a trailer break down, we’ll have to wait for more information to be revealed.

Return to Kanto, battle Team Rocket, become the Pokemon League Champion, and catch them all in Pokemon: Let’s Go, Pikachu and Pokemon: Let’s Go, Eevee, releasing November 16, 2018 for the Nintendo Switch. And don’t forget to pick up a free code for a Shiny Zygarde at participating GameStops June 1-24th.