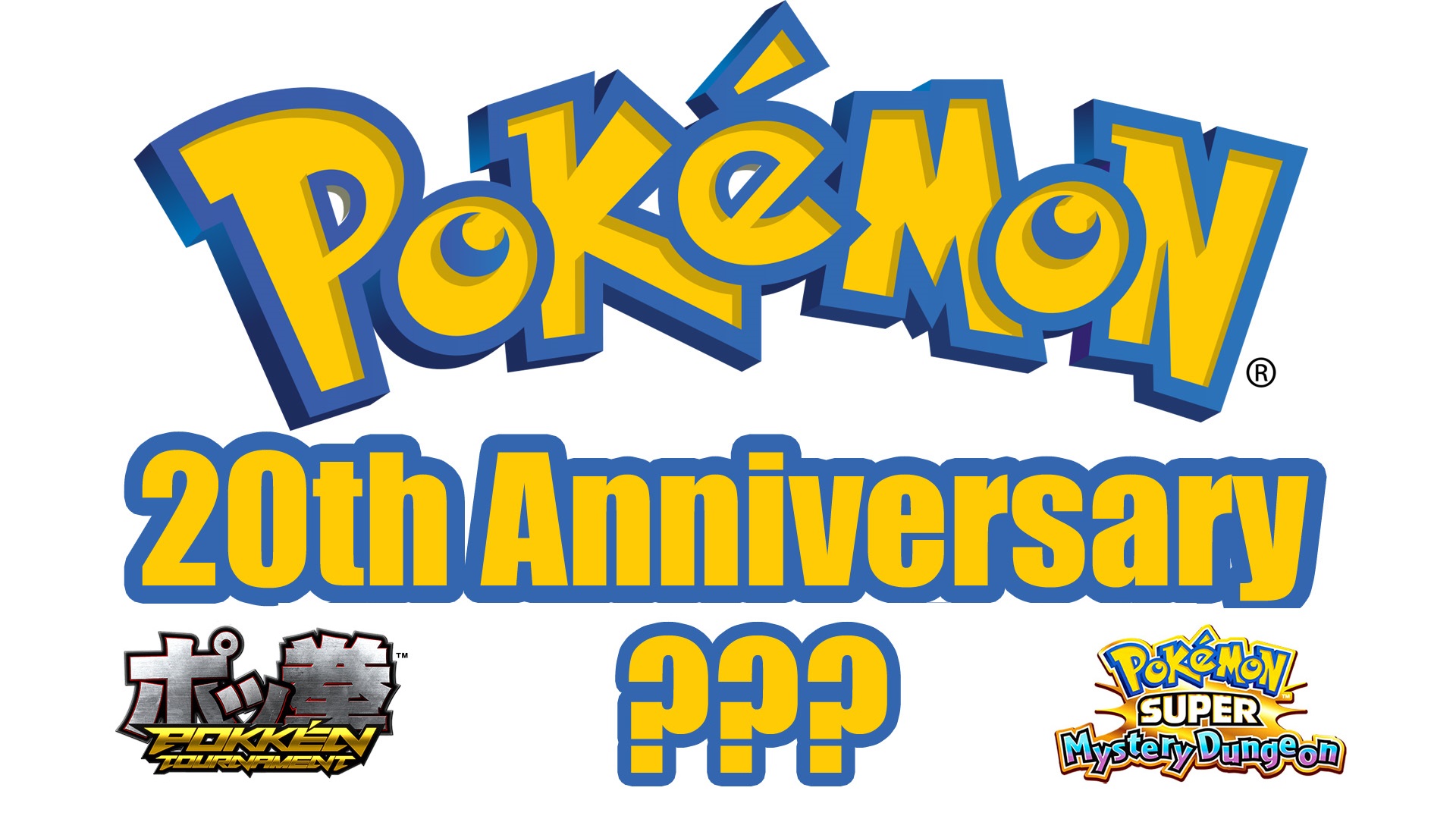 2016 is the 20th Anniversary of the Pokemon franchise. Two games have been announced, and some think a third will be revealed later.

1996 was the year Pokemon Red and Green released in Japan. Two years later, Pokemon Red and Blue released in North America and Australia, while Europe had to wait until 1999. Regardless, the Pokemon franchise as a whole will be celebrating it’s 20th anniversary in 2016!

At this time, two games have been announced for a 2016 release: Pokken Tournament for the Wii U and Pokemon Super Mystery Dungeon for the 3DS. For those that are unfamiliar with these titles, Pokken Tournament is a fighting game from the creators of Tekken. It released in Japanese arcades in July of 2015, but will see an early 2016 release date for the Wii U. Pokemon Super Mystery Dungeon is another game in the Pokemon Mystery Dungeon franchise. In these games, you play as a Pokemon and explore various dungeons with randomized floors. It has an overall story involving all the Pokemon, so there’s a reason as to why you’re exploring dungeons.

Personally, I did not like the Mystery Dungeon game I played, and I’m horrible at fighting games. I’ll probably pass on these two. However, some believe a third Pokemon game will be announced at a later date for the 20th Anniversary. In my professional opinion, I think a third entry in the Kalos region will pop up, probably titled Pokemon Z. This will make the Kalos series include Pokemon X, Y, and Z.

Other people have been thinking a Pokemon Diamond and Pearl remake will appear sometime soon, possibly for the 20th Anniversary. This is because Red, Blue, and Green were remade first as Fire Red and Leaf Green on the GBA; Gold and Silver, with some Crystal elements, were remade second as Heart Gold and Soul Silver on the DS; and Ruby and Sapphire were remade third as Omega Ruby and Alpha Sapphire on the 3DS. The next logical step would be a Diamond and Pearl remake.

I would and wouldn’t like to see a Diamond and Pearl remake for a number of reasons. I would like to see this remake because the DS’ wireless servers were all shut down, making the whole underground area virtually useless. We could also use a visual upgrade, the newer battle rules, and the new fairy type. I wouldn’t like to see a remake because the games don’t seem that old, and I’d much rather see another Red, Blue, and Green remake. Fire Red and Leaf Green were good, but they were so old that they still use the battle system where all types were split up into physical or special attacks depending on the element. Diamond and Pearl were the first Pokemon games to split up all moves into physical, special, and status attacks. Kanto has been left way behind — at least, the original Kanto, not the Kanto found in Heart Gold and Soul Silver. The Pokemon Company wouldn’t be the only JRPG company to remake the same game more than once either. Square Enix has remade Final Fantasy I and II multiple times, though they were mostly ports with new cut scenes. Game Freak and Nintendo like to create enhanced remakes with a ton of new stuff.

Some have been wanting a Pokemon Yellow remake for some time, but I definitely would not want to see that. I would be happy to see some Pokemon Yellow features in a Pokemon Red, Blue, and Green remake. An example is the ability to choose a Pokemon to follow you around, which was also available in Heart Gold and Soul Silver. The thing I dislike about Pokemon Yellow is how it followed the anime even though the anime wasn’t complete. Ash only had about four badges, so the remaining Gym Leaders’ Pokemon didn’t match the Gym Leaders in the anime. Team Rocket (Jesse and James) weren’t around that much either. After Saffron City, they disappeared all together. In the anime, they were in every single town.

Again, this is all just speculation. I think Pokemon Z will be announced for 2016. Many believe Diamond and Pearl will be remade. I can definitely see that happening, but I’d hope for — and can also see — a Red, Blue, and Green remake for the sixth generation. Maybe even some new Mega-Evolved Pokemon, even though I’m not a huge fan of Mega Pokemon. What do you guys think? Leave a comment below with your speculations!

It looks like Pokemon Super Mystery Dungeon is actually coming to Japan and the North America in 2015. It’ll come to Europe and Australia in 2016.