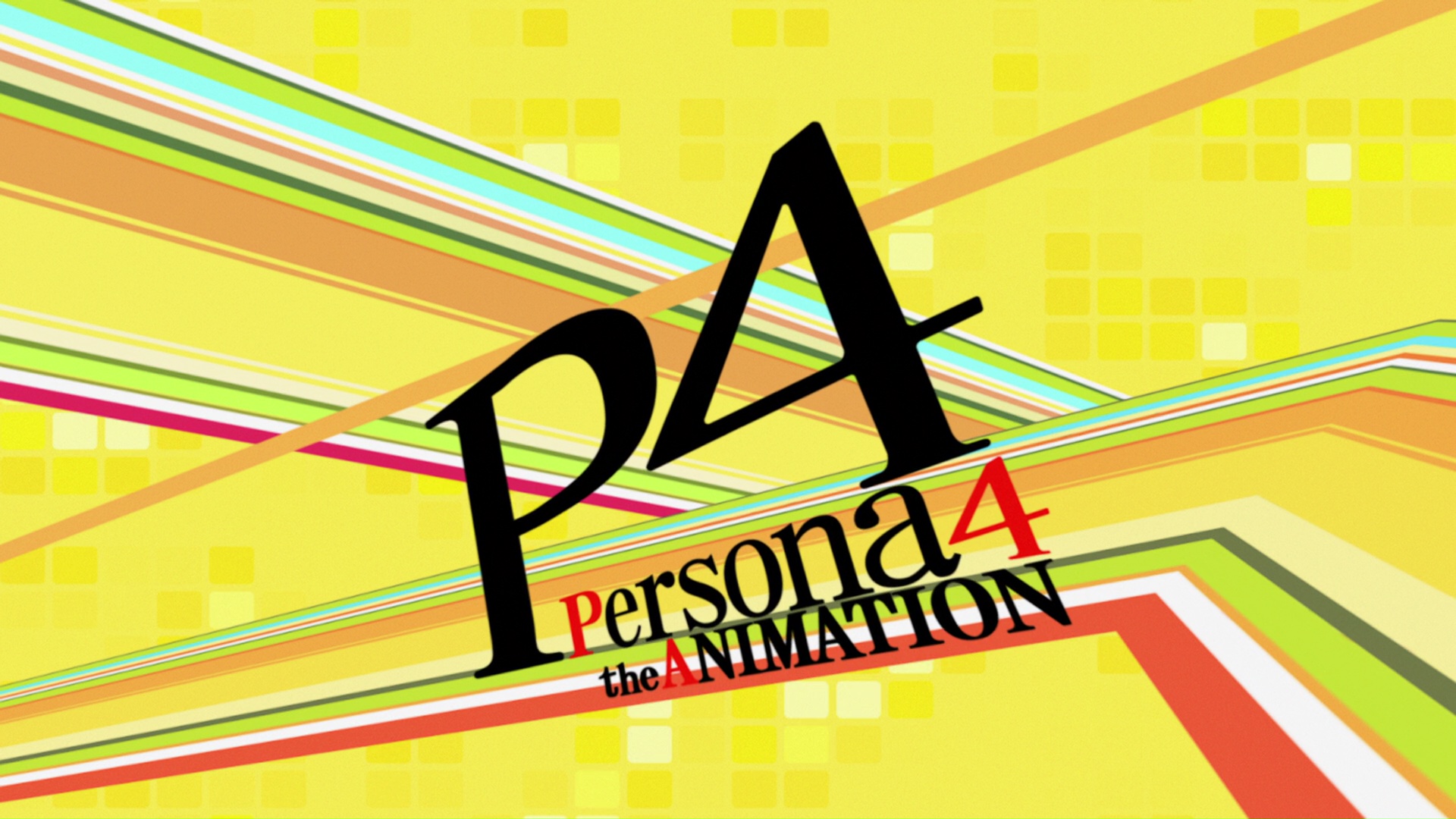 Does this anime live up to the video game? Here’s my Persona 4 The Animation Review.

Persona 4 The Animation is based entirely off the PlayStation 2 video game, Shin Megami Tensei: Persona 4. A PS Vita version was created years later under the name Persona 4 Golden, but all the extras from that game were not included in this anime. So, how does this show stack up against the video game? Let’s find out.

A normal teenager named Yu Narukami begins his year-long stay in a rural town in Japan, only to be welcomed by the news of a dead TV announcer. This seems to coincide with a rumored midnight TV channel. Shortly after, another body appears, mysteriously hung from the top of a telephone pole. The cause of death is unknown, with no leads on the suspect. As the peaceful community is thrown into turmoil, Yu and his classmates investigate the murders while stumbling across a mysterious shadow world inside TVs. They awaken a mysterious power known as Personas, which they use to defeat shadows and prevent more incidents from occurring.

The art style of Persona 4 The Animation is basically the same as the video game. The characters mostly look the same as the video game, but the anime creates a clearer and more detailed appearance. Furthermore, a lot of shadows are added to the characters, giving them a heavier feel. A lot of the anime takes place during dark scenes and while it’s raining, but these shadows are still present during scenes in the middle of the day. 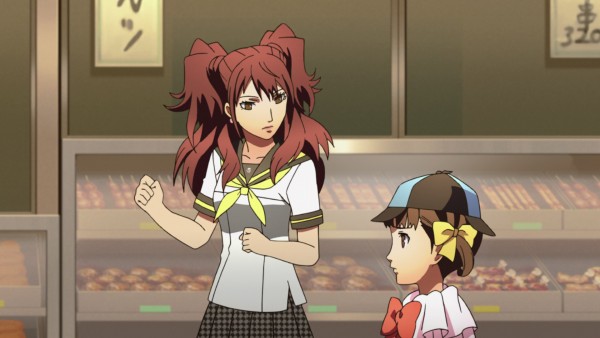 Each character looks great up close, for an anime. However, the further away the camera gets from the characters, the fewer details can be seen. This isn’t anything new to animation, but since there are a lot of characters, the scenes are often pulled back. 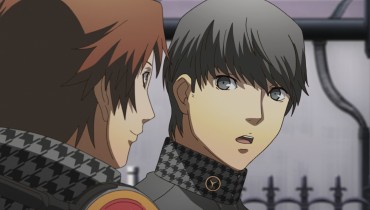 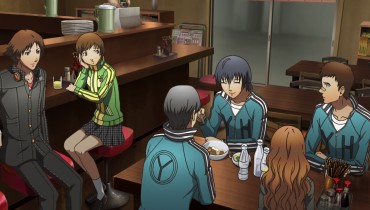 The music is the same as the video game, with the addition of several intro and ending songs. The new songs are performed by Lotus Juice, Yumi Kawamura, and Shihoko Hirata. These three have created and performed in many songs throughout the Persona franchise.

The musical style found in Persona 4 The Animation is an interesting mix. Sometimes there’s a ska feel to the songs, other times there’s a lone piano, then there are times where the song is filled with various sounds from an electronic keyboard. Most of the background music doesn’t make or break a scene, but it does provide a unique feel to Persona 4.

Each voice actor does a great job portraying their character, for the most part. The main character didn’t have a speaking roll in the video game, so a voice actor was used in the anime. For some reason they gave the role to Johnny Yong Bosch in the English adaption, even though he already had a role playing Tohru Adachi in both the video game and the anime. Because of this, he changed his voice for Adachi and used his normal voice for Yu. The new voice he uses for Adachi in the anime seems unusual since he uses his normal voice for Adachi in both video games.

Persona 4 the Animation is a 26 episode series that closely follows the story of the PS2 video game. Many of the episodes continue into each other to give the full adventure each time a new character is introduced and the plot takes a turn. Not only is the main storyline given, but many of the less important — though still highly entertaining — scenarios are told, as well. 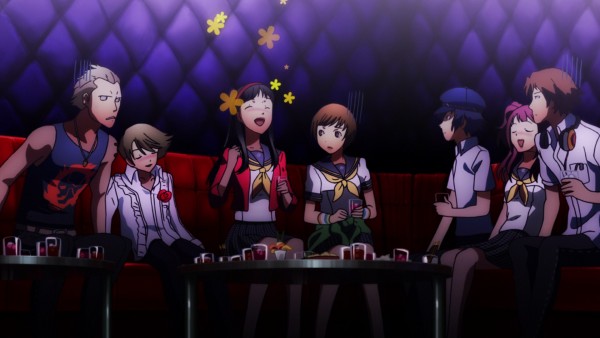 The video game of Persona 4 allows players to choose what the main character says and does. Since this is an anime instead of a video game, the main character remain neutral for the most part, including his relationship with the girls, but he still has a very comedic personality throughout the series. 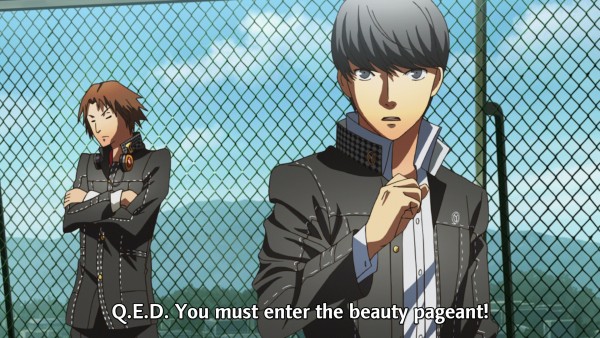 Shin Megami Tensei Persona 4 (the game) also allows you to choose how the main characters spends his free time in the small town of Inaba. There are many side stories and social links that can be established within the year, and the animation doesn’t disappoint in this area either! Many episodes are devoted to these side stories and characters, most notably the summer vacation episodes. These side events during the summer are presented in a single new storyline that involves all the main character, this way it doesn’t seem unusual or forced. 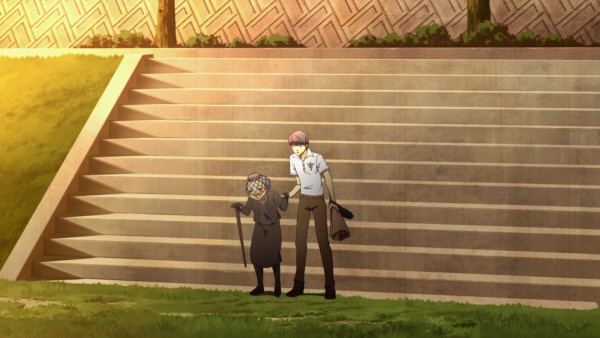 The show is a beautiful mix of comedy and drama over the course of a school year that develops at just the right moment. The main and side stories are told throughout 25 episodes with a complete ending. However, a 26th episode tells the story of the “True Ending.” The video game features a sad ending, normal ending, and true ending scenarios. The 25th episode has the normal ending, and the 26th episode has the true ending. This may slightly confuse those who aren’t followers of the video game.

Persona 4 the Animation is a great anime for both newcomers and fans of the video games. It’s an interesting mix of comedy and drama that doesn’t overlap into each other like some other shows out there.

The mix of fantasy and real world situations should hold the attention of those new to the series throughout all 26 episodes. Fans of the video game will not be disappointed in the least bit, either. This anime gives the full experience without having to re-play the entire game with all that dungeon crawling! I highly recommend this anime to anyone in their teens and older.