Is the PS Vita enhanced remake of PS2’s Shin Megami Tensei: Persona 4 worth it? Here’s my Persona 4 Golden review.

Persona 4 Golden is a remake of Shin Megami Tensei: Persona 4, which released in 2008 on the PlayStation 2. This PS Vita version has been slightly altered and enhanced with various new features, giving it new life. Some say this is the best PS Vita game available, though that’s not much of a competition in itself. So how great is this game? Let’s break it down.

In Persona 4 Golden, you play as a normal teenager who begins his year-long stay in a rural town in Japan, only to be welcomed by the news of a dead TV announcer. This seems to coincide with a rumored midnight TV channel. Shortly after, another body appears, mysteriously hung from the top of a telephone pole. The cause of death is unknown, and your Uncle, one of the town’s detectives, has no leads on the suspect. As the peaceful community is thrown into turmoil, you and your classmates investigate the murders while stumbling across a mysterious shadow world inside TVs. They awaken a mysterious power known as Personas, which they use to defeat shadows and prevent more incidents from occurring.

As you can see, the genre is sort of a mix of murder mystery with science fiction or fantasy. Do not go into this game expecting gore or a dark atmosphere. The majority of the game is very light-hearted, but there are handful of heavy and dramatic areas.

The team behind Persona 4 seem to hold the idea that story comes first and gameplay comes second. In fact, you will sit through about an hour and a half of dialogue and story before really gaining control!

This game’s story is delivered primarily through simple dialogue between characters. Each character’s 2D artwork is displayed at the front of the screen, the dialogue’s text is at the bottom of the screen, and 3D models are in the back acting out each scene. From time to time a fully animated cutscene will play briefly. 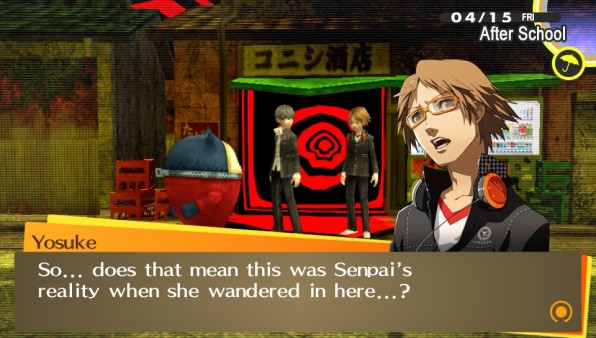 You can set dialogue to play out automatically or only continue after pressing a button. If playing the game a second time (or more), you can fast forward through all the dialogue and get to the gameplay.

Luckily, there are a number of terrific voice actors in Persona 4 Golden to hold your attention. A handful of actors were replaced from the original Shin Megami Tensei: Persona 4 cast, and the decision to do this was a great one. Each character has their own unique personality, and the actors really bring them to life.

The art style found in Persona 4 Golden is similar to a Japanese anime. The character artwork is set at the foreground during dialogue, and 3D models of the same characters are placed in the background. The 3D models are a bit similar, but it would have been great if they were cell-shaded and appeared more anime-like, similar to the 2D art. 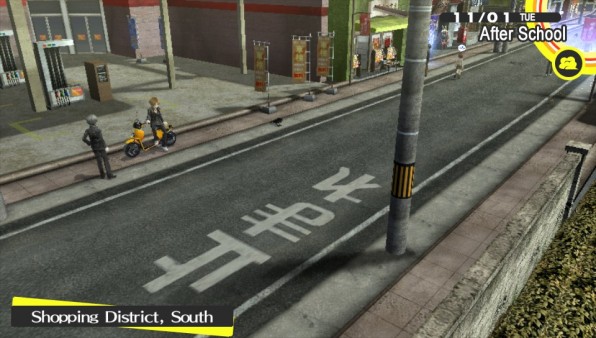 The music of Persona 4 Golden is an interesting mix of styles. Sometimes there’s a ska feel to the songs, other times there’s a lone piano, and then there are times where the song is filled with various sounds from an electronic keyboard. Each of these songs provide a unique feel to Persona 4.

The majority is background music, but there are some songs complete with vocals. One of the singers is Yumi Kawamura, a woman who has performed in many songs throughout the Persona franchise. A favorite song of mine is called Snowflakes, which is one of many new songs added to the Golden version of Persona 4.

The gameplay is a mix of dungeon crawling JRPG, monster collection, and simulation. The monsters you collect are called Personas, which is the title of the game! The main character has the ability to collect and use these Personas in battle. Personas can then be fused together to create even stronger Personas, some with unique and powerful skills. Persona 4 Golden features a total of 179 different Personas, some which are new to this remake. 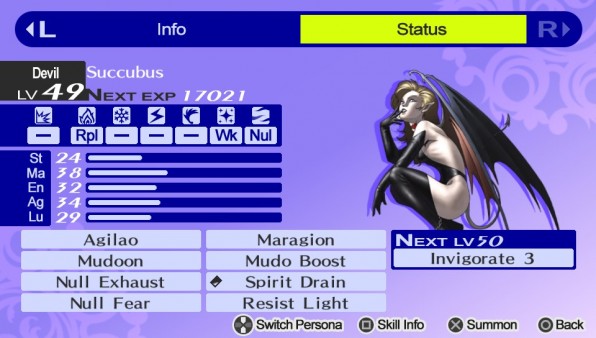 The battle system in Persona 4 Golden uses a traditional turn-based JRPG style. That is when each character takes a turn in battle, one after the other. Almost every enemy has a weakness or resistance to seven different elements. If you hit an enemy with an element they’re weak to, your team will get the ability to attack once more. Each character, with the exception of the main character, can only use one Persona to fight with. Battling goes even deeper with status ailments and Status buffs and debuffs, and there are four different difficulty settings that can be chosen at the beginning of the game. 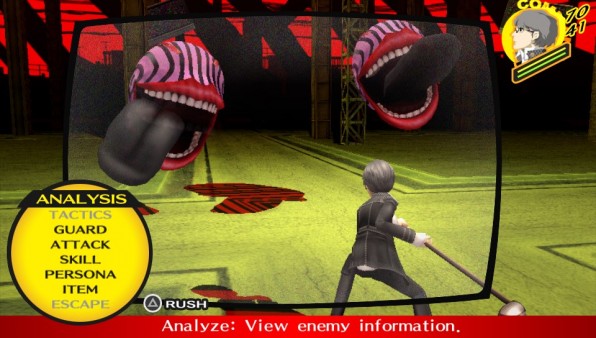 All of the battling in Persona 4 Golden takes place in the shadow world, which can only be accessed at select times during the day through a large TV screen. There are several dungeons inside the shadow world which are unlocked as the story progresses.

The majority of the gameplay follows a simulation style. As a teenage boy who just moved into the town of Inaba and entered a new high school, you meet a large number of people and take part in various activities. The game allows you to do all of these activities on a day-by-day basis. Some days are tied to storylines or daily events of a high school kid’s life, but there are still many free days throughout the year. Of course, six of the seven days from morning to the afternoon are set aside for school. 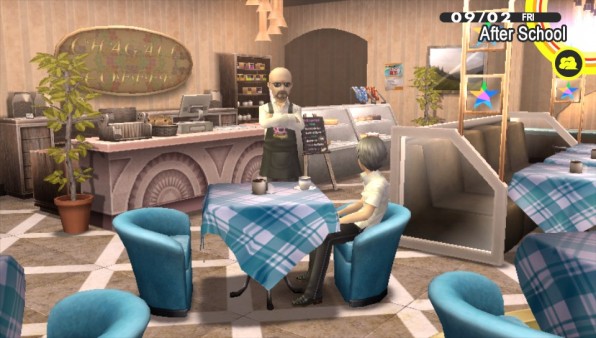 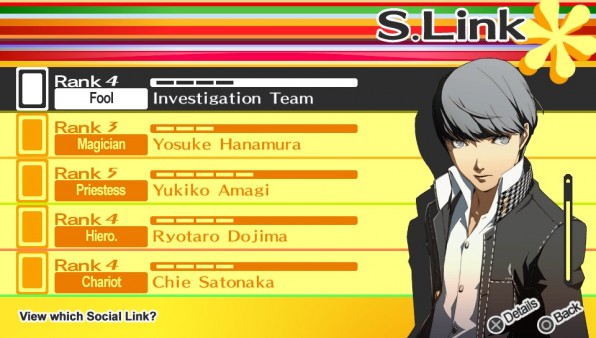 Additionally, there are many other activities that can be done, such as part-time jobs, reading, gardening, and much more. Doing these activities will increase your character’s social qualities, which open up new Social Links, dialogue choices, and increases skill for certain activities.

Lastly, there are several quests that can be done in Inaba. Most of these are fetch quests, meaning you have to find items — usually these items are in the Shadow World — and bring them to a character in town. Completing these quests will give you useful, and sometimes very rare, items. There’s so much to do, so make sure you use your time wisely!

In addition to new songs, Personas, and Quests, the Golden remake includes a brand new character and two more new Social Links. One of the Social Links is tied to Adachi, another detective in Inaba who was in the original game, but wasn’t available to befriend. The other Social Link is tied to this new character, Marie, who will lead you to a brand new dungeon and epilogue if you follow the right path. The epilogue appears after receiving either the normal or true ending. Persona 4 has always featured a sad, normal, and true ending. Additionally, Persona 4 Golden adds a bad ending if you make the right, or should I say wrong, choices. 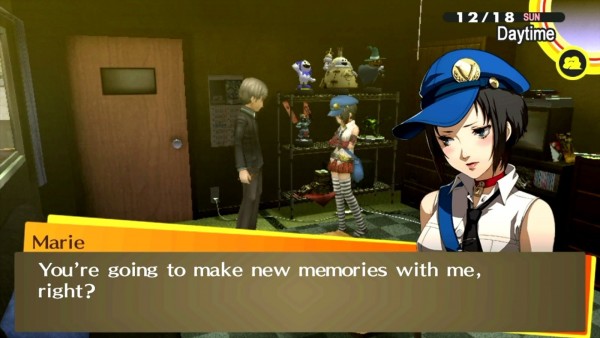 After completing the game, there’s a large collection of artwork, music, videos, and a quiz show that becomes unlocked in the main menu. It’s a terrific set of extras that many look over.

Persona 4 Golden is definitely one of the best video games available on PS Vita. It’s a terrific mix of genres in terms of story and gameplay. Of course, those that don’t enjoy story and massive amount of dialogue may not like this game. Then again, if you don’t like dialogue, you probably aren’t the type to play simulation games either.

I highly recommend Persona 4 Golden to those who love JRPGs and Simulation games. The story is terrific, and the dungeon crawling and Personas show you there’s a lot of strategy to this game. When you think about it, it’s amazing how much the original Shin Megami Tensei: Persona 4 on PlayStation 2 was overlooked!