Check out this detailed unboxing of the Persona 3 The Movie 3 Limited Edition Blu Ray.

The Limited Edition set for Persona 3 The Movie #3 Falling Down comes with a few collectible goodies. As you would expect, the video of the blu ray is 1920 x 1080 resolution, the audio choices are Japanese DTS Digital Surround 2.0, Japanese DTS Japanese HD Master Audio 5.1, and a DTS Japanese audio commentary. That’s right, only Japanese audio, but they included English subtitles for foreigners. 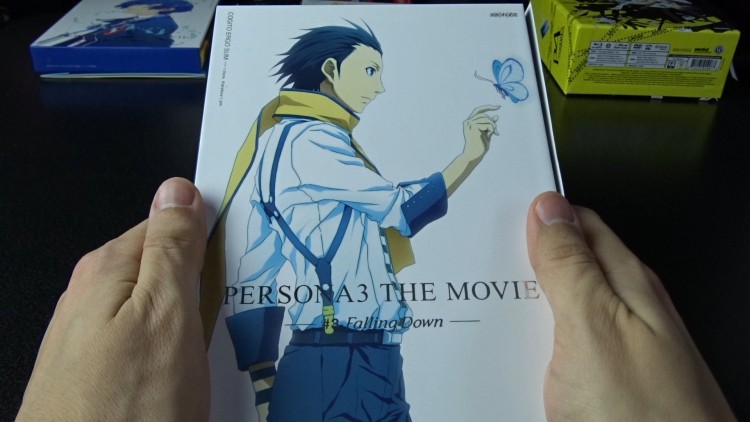 This set includes the movie on Blu Ray (or DVD) and a 13 track audio CD. They are set in a plastic case with some movie artwork on the other side. Most of the songs on the soundtrack CD are just background tracks, but one is the main theme to this movie. They are:

The set also includes a small, forty-four page booklet inside of the cardboard case. The booklet has character artwork, setting artwork, rough sketches, soundtrack info, free talk with cast and crew (only in Japanese), a teaser for the next movie, and more.

The large, folded blue card that comes with the set holds ten random stickers in a small package. These stickers have the same artwork found at the back of the previously mentioned booklet. In case you were wondering, this folded card does not fit in the cardboard box.

There are also three promotional “cards” that are as big as the booklet and box. They’re not really as thick as cards, but they’re not all that thin either. Now that I think about it, I believe this is the same artwork as the movie posters.

Lastly, the special features included with this Blu Ray are pretty scarce. There are three PVs (promotional videos) that tease the movie, one CM (commercial message) which is basically just the movie trailer, and the Tartarus comic strip. The strips are slightly animated and have voice overs, but it’s all in Japanese without English subtitle options. There are several comic with a runtime of five minutes.

The thing I hate the most about this set, and many other blu ray sets, is how the movie information that is usually on the back of the box is on a separate paper. This paper is not attached in any way what so ever to the box set. 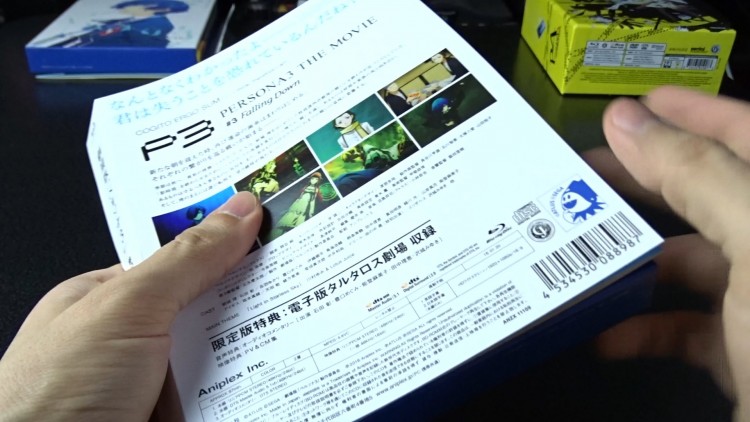 And that’s everything that comes with the Persona 3 The Movie 3 Falling Down Limited Edition Blu Ray set. It is an okay set for the price. If you want to buy a copy for yourself, grab it from one of the Amazon links below. If you use these links I’ll get a small kickback that won’t cost you anything! It will help keep my site and YouTube channels running.