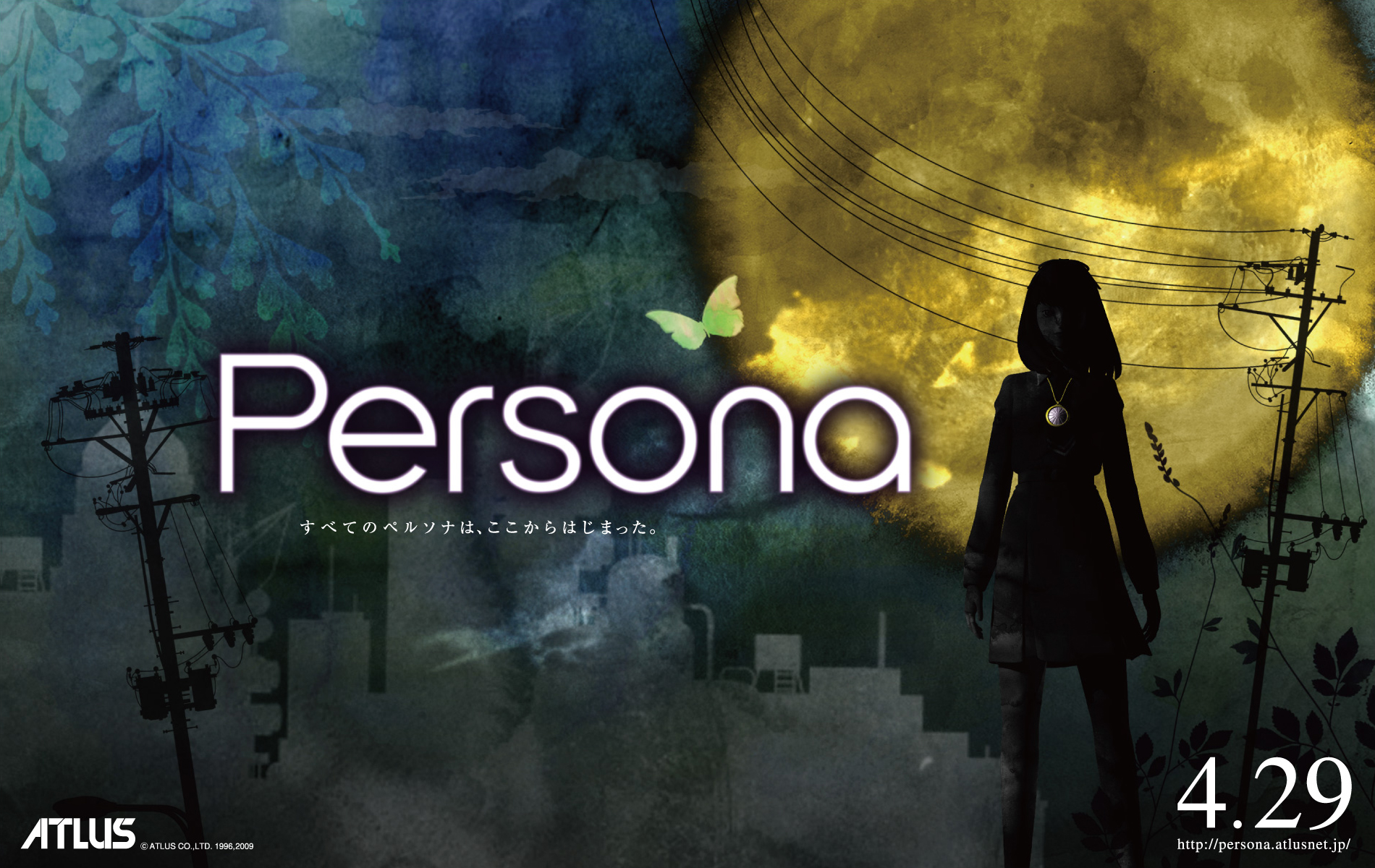 My Jump Into the Persona Series

I noticed a lot of people recently got into the Persona series once Persona 4 Golden hit the PS Vita, so I thought I’d share my story as they have shared theirs.

I’m sort of just trying to kill time before my new PC arrives. I didn’t plan on this to be too long, but like always, it sort of took a life of its own.

What Sparked My Interest

I barely got into the Persona series this year! I have such a horrible memory that I already forgot who told me to start. Honestly, I had never really heard of the Persona series. If I had heard of it, I must not have paid much attention to it. Let me start by saying I got a PS Vita on launch. No, I wasn’t a huge PlayStation lover or anything, I actually won it from a contest (Skill based, not luck). I tried out some demos and everything, but I didn’t buy any Vita games or PSP games from the PSN Store. There were a few PSP games I wanted to try, but they weren’t in the PSN Store, and they still aren’t! I’m mainly talking about Final Fantasy VII: Crisis Core. Anyways, in January of this year someone must have told me to check out Persona 4 Golden. If the one that told me is reading my blog, tell me it was you! I downloaded it off of PSN because I didn’t want to wait for it to be shipped, nor did I want to go to the store and look for it.

After Persona 4 Golden finished downloading, I played it all day with an open mind. I like to give games enough time before throwing them aside, and very few games have hit my shelves without a full play through. Cut scene after cut scene played, and there weren’t any battles for about 2 or 3 hours into the game. This turns off a number of gamers, but I love stories in video games, and really feel they are under appreciated. Unfortunately, I wasn’t able to play straight through. I had to play a few other games for work while P4G was in my free time. I played through the entire game without a guide until the big decision part in December. I kept getting the bad endings because I did gut reactions. I read the choices I had to make to play further, and I finished up the game a few days later. With the game complete, I was all ready to start up a New Game Plus. Actually, I started planning my second play through before the first was done! I had even considered starting a New Game Plus directly after the bad ending.

While playing a second time, I decided to help out Jedmist and Kingbren with the Persona 4 Golden Wiki. This was entirely pro bono, which I normally don’t do. We all worked together with most of the guide, but I did the Abridged Walkthrough all on my own. As you can see, there was a ton of work put in, and it’s a pretty damn complete guide. After three playthroughs and a bit over 300 hours of gameplay between January and April, I platinumed Persona 4 Golden and completed the guide. I also had to write up five or six other guides in the process. 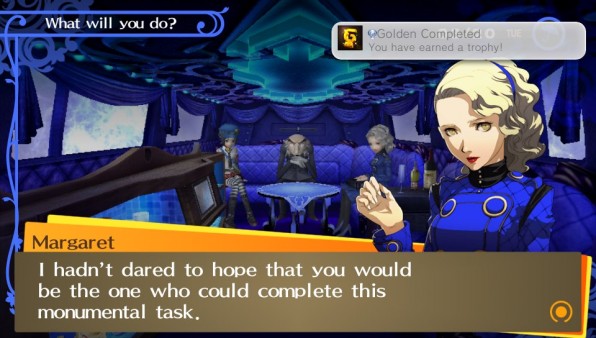 With Persona 4 Golden fresh in my mind, I felt the need for more! I saw that all other Persona games were available in the Playstation Network Store, so I decided to buy them. Quick Side Note: Weren’t they going to change it to Sony Entertainment Network? Anyways, PSN (or SEN) had some sort of deal going on around the time. For every $50 you spend, you would get $10 in return. I took advantage of this deal and bought

At the same time I was talking with Jedmist about all the Persona games — apparently he had played them all already. He told me to get Persona 3 FES instead of Persona 3 Portable because of a few changes. So on top of those others, I bought Persona 3 FES. All of those except for P3 FES and P4A were playable on my PS Vita. I was a bit bummed out P3 FES was only on PS3 because I was used to playing on a portable for these long RPGs. 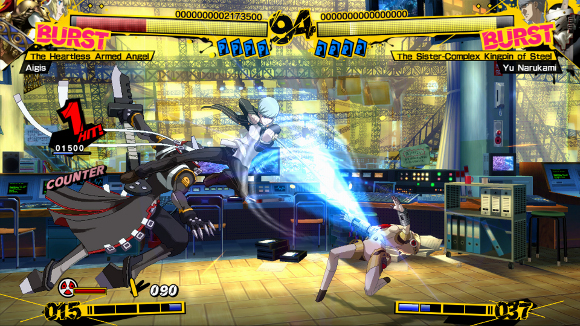 The next game I chose to play was Persona Portable. I thought I’d start from the ground up with the series. This wasn’t the first time I started out with the inferior early games after playing the more advanced recent ones. I did the same thing for the Resident Evil series where I played every one of the main series games on the GameCube. Yes, Persona Portable was very different, but I wasn’t really in the mood for straight up JRPG grinding at that point. I powered through the game, skipped the two Persona 2s, and went for Persona 3. 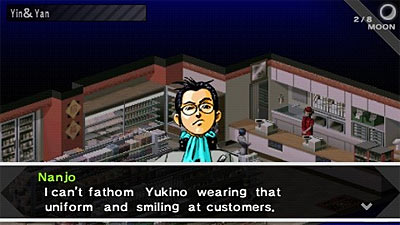 Next came another decision: I had to choose between Persona 3 FES and Persona 3 Portable. There are a number of changes, but the two most important changes are how the battle system is altered and how the story is told. Persona 3 Portable allows you to fully control your team in battle, while Persona 3 FES only allows you to control the main character. However, Persona 3 FES has animated cut scenes and 3D models of the characters playing out the scenes in the background when the 2D models are in the foreground with dialogue. Persona 3 Portable only had the 2D models in the foreground with dialogue while the background is mostly a static image. One other big thing is how Persona 3 FES has an extra epilogue chapter that P3P does not have. Those are the three biggies. Since I was more into story than dungeon crawling, I went with P3 FES on easy. I tried normal at first, but my team’s AI was too stupid!

I still have the two Persona 2 games to play, but I haven’t really been in the mood for them. They’re more like Persona 1 than Persona 3 and 4. They’re on my backlog for now.

Why Didn’t I Get Into These Before?

After playing Persona 3 FES and Persona 4 Golden, I wondered why I never played, or even really heard, of these games when they first released. I’ve been a pretty big JRPG fan most of my life. I’ve played Pokemon and Final Fantasy, so Persona would have been a great addition. I did a quick Wikipedia search and saw they released on the PS2 in 2007 and 2008. “Well there’s you’re problem!” The first problem was they released on PS2. The next gen was already out in full force at that time, and all my PS2s were broken down by that time. Yes, I went through three PS2s! They broke down more than my launch Xbox 360. The second problem was they released around the same time as many really awesome games, most of which I had been playing at that time. Let me list a few big name games that released in ’07 and ’08:

As you can see, they were lost in a sea of great games, and I don’t really remember any sort of ads for P3 or P4. I’m glad there was more hype this time around for me to get into it.

Don’t Forget About the Anime!

If you really enjoyed the story of Persona 4, but don’t want to spend another hundred hours playing the game again, you can always buy Persona 4 The Animation. They made 26 Episodes based off of Persona 4, and many of the voice actors reprise their role! It’s available on both Blu Ray and DVD, though the Blu Ray version only has English voice overs. The DVDs, on the other hand, have both Japanese and English voice overs. 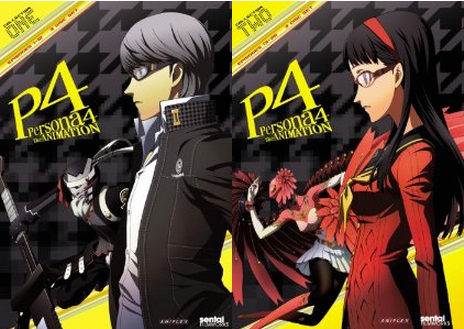 Persona 3 is getting their own animated movie that will release at the end of the year. The only info we have is a trailer and a website.

Can You Get Into It?

Now for the big question: Can you get into the Persona series too? This question can be answered based on tastes and what hardware you own.

If you have a PS Vita, you can buy every Persona game off of PSN and play them on the Vita, with the exception of Persona 4 Arena. As I said earlier, I’d recommend Persona 3 FES on the PS3 over Persona 3 Portable. If you have a PS3, you will only be able to play Persona 2 Eternal Punishment, Persona 3 FES, and Persona 4 Arena. I believe Revelations: Persona (the name of the first Persona) is on PSN for the PS3, but it was a heavily altered version of the original Revelations: Persona. It’d be best to go with Persona Portable.

Now for the question of taste. Persona 1 and 2 are very old school. There is mainly written dialogue over any voice overs, and the story seems second to the grinding. The only way to get Personas in those games is to talk with the demons, get them excited, and have them drop a card for you to take to the Velvet Room to create a Persona. Two other things I should note is how all enemy encounters are random, and Persona 1 uses a grid system in their battles. If you want to focus on JRPG battles over story, then you may want to pick these up. Reminder: These are pretty old school, so they aren’t for the inexperienced players!

When it comes to Persona 3 and 4, these games focus way more on story than grinding and battles. They both have a ton of voice acting, so you won’t be sitting there reading, you’ll be sitting there and watching like a movie or TV Show. The Personas in those games are randomly given to the main character after a battle, but the team characters all have their own Persona locked on to them. P3 and P4 are the ones with the Social Link system, too. This allows you to form bonds with other people in the world to strengthen Persona fusion, and in P4 it will strengthen your teammates. The Social Links also give extra back story to characters in the world, which makes the game that much more fun and interesting. If you love a ton of story mixed with your JRPG battles, then you should pick these up.