My First Concert: BABYMETAL Live at the Regency Ballroom

I experienced my first concert ever recently. Here’s a quick vlog with my experience.

Yes, it’s rather late in my life to go to a musical concert for the first time ever, but better late than never! And it was great that BABYMETAL was the first band I saw live, as well. So let me go over the trip and the show.

The show took place in San Francisco at the Regency Ballroom. I live about an hour and a half drive from San Francisco, but I really hate driving in cars and would have preferred to take an alternate route. I decided to take a short ride in a car to the next town over, take a two hour train ride to Oakland, take a 30 minute ferry to San Francisco, and then walk two miles up Nob Hill to my hotel. The venue was about four blocks away from the hotel.

I was hoping I could get into SF early enough to rest or take a nap before the show, but the train was late and I had to take a later ferry. I also didn’t expect to walk uphill! I reached the hotel around 5:00pm, and I needed to be in line by 6:30pm for the VIP status check. I rested for a very short time before heading back out.

Apparently there was some miscommunication between the venue’s emails and what really happened. I expected to go inside the venue around 6:30pm as a VIP, and then the doors would open for everyone at 7:30pm and the show would start at 9:00pm. Unfortunately, that’s not what happened. The Regency Ballroom staff checked the IDs of all the VIP ticket holders at 6:30pm and gave us lanyards and small microfiber “flags” with the BABYMETAL crash logo on them. The doors then opened a little after 7:30pm, but only for VIP people. Which meant I had to wait in line for over an hour in the cold San Francisco weather before I got to go in! The upside was that I met a group of girls for a bit and a guy who was subscribed to my YouTube channel!

The security was pretty restrictive to get into the venue. We had to go through a metal detector, empty our pockets, and get patted down. They didn’t allow food, drinks, or any cameras other than smartphone cameras, which was a bummer because I really wanted to get good shots of the band and the venue using the camera I normally use for vlogs. I was able to get a few shots of the small venue using a phone. I believe maximum capacity was around 1500 people. The ground floor was standing only, and the balcony had some seats. I decided to stay on the ground floor. 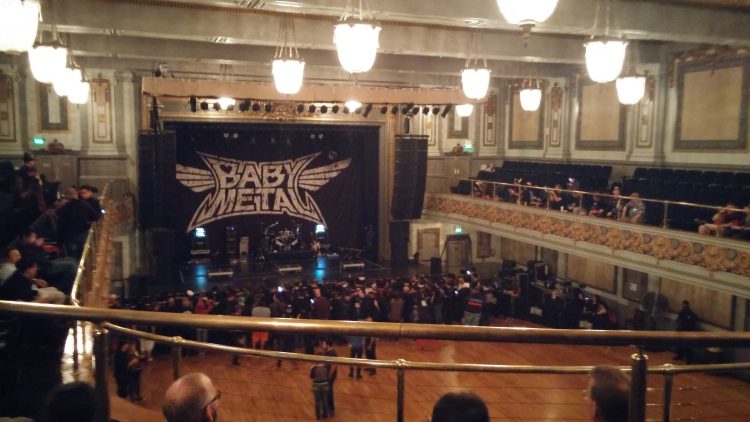 Since I was a VIP ticket holder, I was able to buy merch before the general admission people came in. I bought three t-shirts, one for each of the three different designs. They were also selling a long sleeved shirt with one of the same designs as a t-shirt I purchased, and there was a hat with the BABYMETAL shredded logo. I grabbed something to eat from their kitchen since I hadn’t eaten much earlier in the day. The rest of the people came in shortly after. I ran into the same group of girls I spoke to in the line for a short time. One of the girls’ name was Crystal. She was into BABYMETAL the most out of the girls, and was definitely the cutest. The others were mostly there for support, I think. Crystal was the one who took most of the pictures and videos I ended up using in this post and the YouTube video. Big shout out and thanks to her! 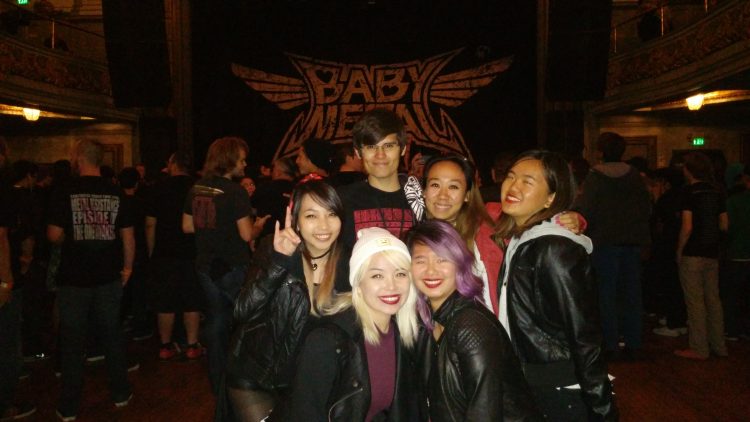 Again, the show was supposed to start at 9:00pm, but it didn’t begin until about 9:30 or 9:45. Most people were agitated waiting so long, but once the music started we were all amped and ready to go! I stood around my new friends for most of the show. Another guy and I tried protecting the girls from the mosh pit for most of the show since it was such a small venue. One guy ended up flying at me from the mosh pit and smashing my nose with his back. I was fine, no big deal. I did have a small urge to jump in the pit, but I was also really afraid of breaking my glasses.

When it came to the band and the show itself, BABYMETAL rocked hard. The band sounded terrific, and the girls actually sounded better in person. Su-Metal’s voice sounded beautiful and melodic. It was also higher pitched in person compared to CDs and Blu Rays. There were times when the crowd sounded louder than the band, which I really didn’t expect. My ears were ringing a bit during the show from the crowd, and they were a little fuzzy after the show, but they recuperated by the next day.

I wasn’t able to see the girls throughout the entire show since I’m only about 5’7″, so there were times when I just closed my eyes and rocked out to the music instead of trying to get a better view. I offered piggy back rides to the shorter girls, but they declined.

The show seemed way shorter than the shows on Blu Ray, but maybe it was because I was so into it. They did play a number of songs from their new album, and a few from the old one. Some of my favorites were Amore, Megitsune, Ijime Dame Zettai, Road of Resistance, and Meta Taro. I wasn’t a huge fan of Sis Anger on the album, but it sounded great in person. I was hoping for No Rain No Rainbow since it’s my absolute favorite, but they didn’t play that one. 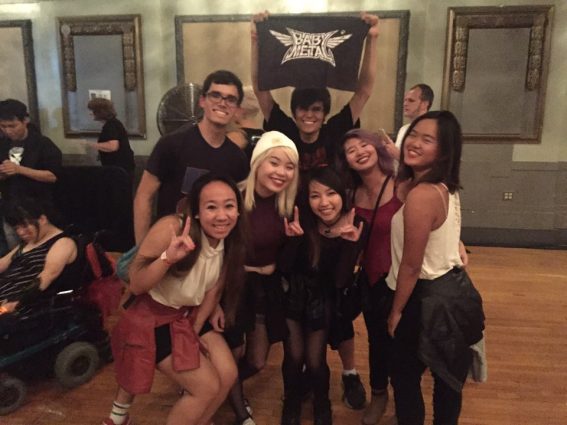 When I got back to the hotel I ran into the same guy from outside the venue. We talked for a short while in the elevator. Once he left, a woman next to me said she also saw my videos on YouTube. It was really cool. If there’s anyone out there who recognizes me, don’t be afraid to come up and talk. We don’t have to talk about my videos or YouTube at all, I just love being able to talk about something similar (like BABYMETAL) to someone I don’t know. I actually talked to a few more people inside the venue about BABYMETAL and some other bands.

I had an absolute blast at the show and hope I can go to another. I would love to go to the bigger BABYMETAL shows in Japan at the huge arenas with all the set pieces pyro, lights, and the whole nine yards. The venue in San Francisco had a decent strobe light and some red lighting, but that was about it. Maybe one day I’ll get to see them in Japan!