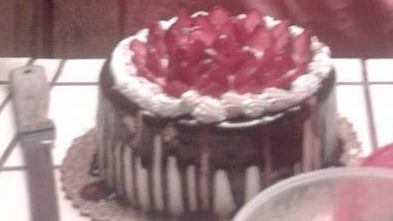 Yup, today was my 27th birthday. Most people say time is going by fast, and I would agree when looking back. If I actually look at all the shit I’ve done day to day, time is still pretty damn long.

Anyhow, the day wasn’t anything special. Turning 27 on a Tuesday and living far from the majority of my large Mexican family, I didn’t expect too much. There were way too many kids here in my opinion, and I’m still recovering from a cold. Furthermore, my back wasn’t exactly 100% because my fat ass nephew jumped on my shoulders two days before. My back didn’t feel as bad as it did, but it’s still not great.

We ate carne asada with avocado, beans, rice, and corn tortillas. It was super delicious and relatively simplistic. It’s one of my favorite foods, but it would have been better with some pico de gallo. For the birthday cake I asked for the usual vanilla cake with strawberries, but they could only find chocolate cake with strawberries. No big deal. To mix things up a bit, I also asked for mint chocolate chip ice cream. I haven’t had that stuff in awhile, and it was delicious!

People asked me throughout the day if I got what I wanted, but I didn’t want to tell them I didn’t get anything. Ha ha. I wasn’t really expecting anything since I’m getting so old and only my immediate family was around. Later in the day I did get two cool games. The first gift I got was “The Last of Us Remastered” for the PS4. Everyone kept telling me to play the game when it came out on PS3, but I never got around to it. The second gift was “My Japanese Coach” for the DS. It’s a little game that will help me learn Japanese. I’ve been using a few other computer programs to help me learn, so I thought I would give this one a shot to contribute to my education. It uses the DS mic for pronunciation and the bottom touch screen for writing hiragana and katakana. I may get the Kanji dictionary game for DS at a later date.

That’s really all there was to it. A decent birthday without too much stress. Now to continue on with my life… This next year will bring a huge change.