An unusual anime packed with comedy and action, but is it unusual good or unusual bad? Here’s my Kantai Collection Review.

Kantai Collection (艦隊これくしょん), sometimes translated as Fleet Girls Collection, is an anime series based off a free-to-play video game of the same name. I have never played this game, so I can’t be sure just how similar the series is to the game. Like usual, I broke this review down into easy-to-understand sections.

Mankind has been driven away from the sea by mysterious creatures known as Abyssals. The only ones who can stop them are girls who posses the souls of old warships. Using special weapons known as “Outfits,” it is their mission to destroy the Abyssal fleet and reclaim the sea. 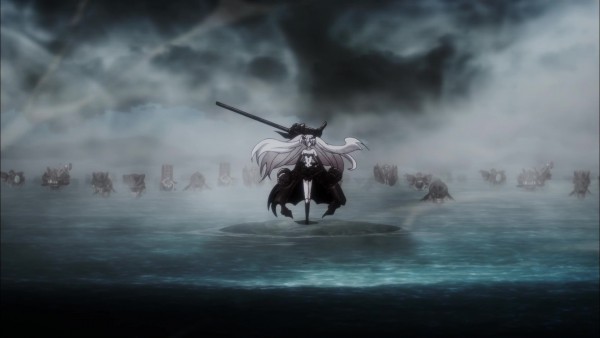 The art style of Kantai Collection is pretty similar to most anime series these days. This anime has very clear and colorful computer generated images. Sometimes the scenes get very colorful, like when the sun sets and fills the area with an orange glow. Other times, specifically during battles, the color becomes very bleak. The colors are used perfectly to represent the mood in a scene. 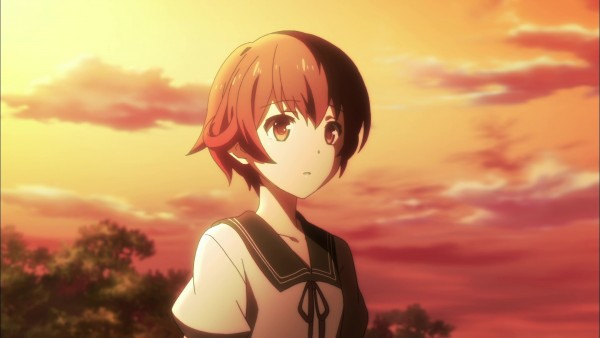 The unusual thing about Kantai Collection is the switch between 2D and 3D art work. When a battle begins out at sea, the anime sometimes switches to 3D character models. It’s highly noticeable and looks really awkward. Each character moves rigidly, and their hair becomes one large mass. Everything seems to move a lot slower too, which should be the opposite intention when a battle is taking place! I’m not sure the reason behind doing this, but I wish they didn’t. Luckily this doesn’t always occur throughout each campaign. 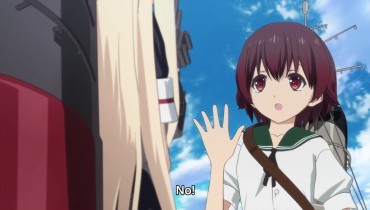 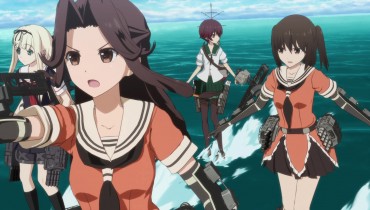 I probably should also note how the entire series features nothing but female characters, often times in short school outfits. If that sort of thing bothers you, this anime is not for you.

The music of Kantai Collection is a mix of simplicity and boldness. During comedic or calm scenes, the music is pretty much like most other anime you’ll come across. During more important or action-filled scenes, the music becomes a lot more forceful to fit with the military style seen in the anime. However, the volume is mostly kept down to a minimum, even during battle. This could be because there is a lot of talking between each character about the mission at hand – you wouldn’t want to miss out on something important being said.

I also want to note that the opening song is possibly the best opening to an anime I’ve ever come across. Of course, music is subjective, but AKINO from bless4 does a terrific job performing the song Miiro.

This anime series features a massive number of characters, but only a handful of voice actors. Some are veterans like Yui Horie and Ayako Kawasumi, but others only have a few years of work under their belt. Because of this, and the wide range of characters, you’ll run into excellent to sub-par acting throughout the show.

Kantai Collection is a very unusual mix of comedy, military action, and fantasy. As mentioned in the synopsis, each girl in this series possess the soul of an old warship. They use special weapons known as outfits to battle the Abyssal fleet. Some weapons resemble the ordnance found on old WWII ships, while other characters shoot arrows from a bow that turn into fighter planes. While wearing these outfits, the girls are able to pretty much skate on the surface of the ocean to get around.

Since the characters are seen as warships much of the time, they are never said to really die, only “sink.” They can be remodeled after obtaining enough experience, and even repaired with a long dip in the hot springs. Once in awhile you even see an instant repair — most likely taken from the video game. 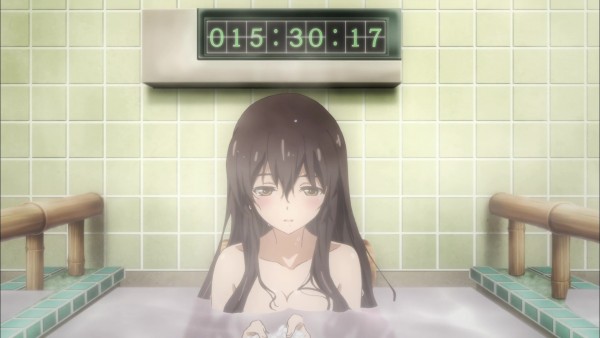 The story primarily follows a girl named Fubuki, a girl destroy who just transferred into the naval base the other girls live and train at. At the start of the series, Fubuki had never been in a single battle, and could hardly even go out to sea. Throughout the series she works hard to increase her skill and become a better asset to the fleet. 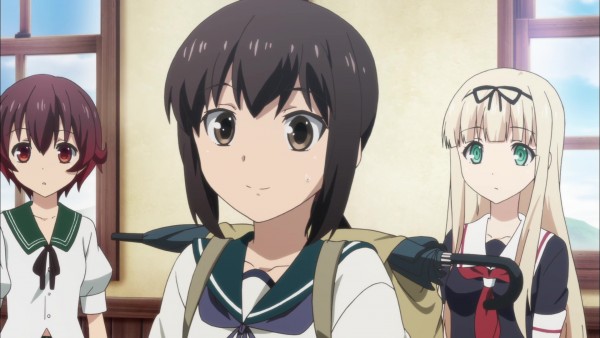 Not only does Fubuki train throughout the series, but she attempts to make friends with everyone at the base, all while learning more about combat. It’s almost a slice-of-life style comedy while at the base, but with a fantasy military twist. 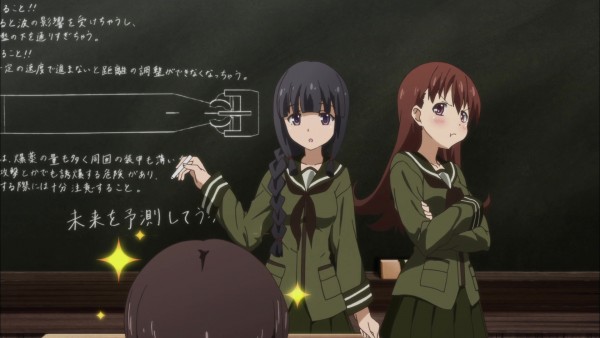 Eleven out of the twelve episodes of Kantai Collection directly follow Fubuki — one filler episode is the exception around the middle of the series. The naval base everyone is stationed at holds a massive number of warships / girls. Each character has their own personality, but there are so many thrown at you in such a small time frame that it’s nearly impossible to remember each one. 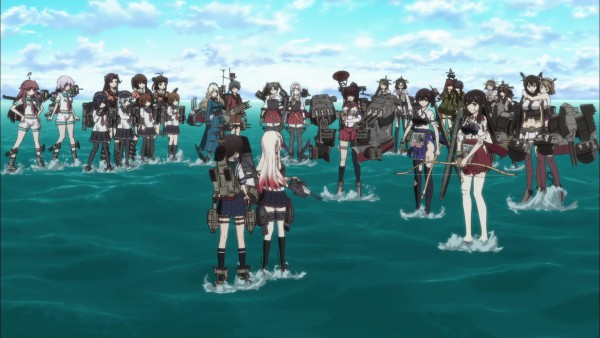 Once the characters leave the base for a mission, things almost always switch from a comedic to a serious atmosphere. Sometimes the pacing seems rushed, not allowing you to fully feel or understand what the characters are experiencing. Fortunately, the entire series does not suffer from bad pacing, mainly just the first few episodes.

It seems like there’s a lot more comedy throughout the series than combat, but when a battle does break out there is quite a bit of action and strategy taking place. 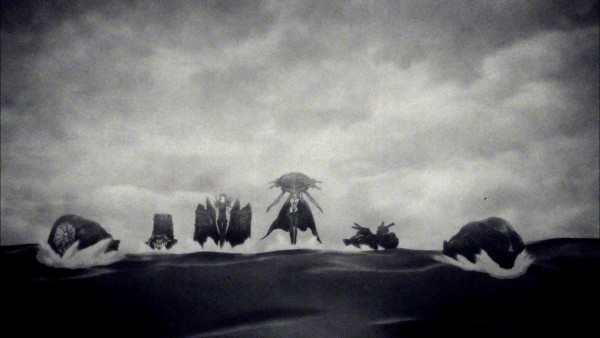 Even with all the battles and some of the directions this anime goes, you never really feel an overly serious tone. The amount of comedy slightly undermines the sincerity, but it’s not the comedy alone. When something important does occur, it’s not given enough attention to really stir any emotions. Don’t jump into this anime expecting anything too heavy.

Kantai Collection is a unique mix of comedy and action-packed military fantasy. It’s really tough to recommend this anime to a specific group since it’s so unusual. Don’t get me wrong, I’m not saying nobody should watch this, I’m simply saying this anime isn’t for everyone given the style. Give it a shot and see if you enjoy it. The series is only 12 episodes long, and the end of the last episode stated a second season is currently being produced!

Unfortunately, you cannot buy this anime outside of Japan at this time. However, it is available on Crunchy Roll with English subtitles! If you’d like to buy the Japanese blu ray or the DVD (no English subtitles, and with region locks), you can find Amazon links below.