What’s my opinion on E3 2014, and what was I doing during the entire event?

As I’m sure everyone into gaming knows, the Electronic Entertainment Expo (E3) passed by about two weeks ago. I was pretty busy that entire week to write anything up on this site, and last week I didn’t feel like it or downright forgot. Well, better late then never.

Now, let me tell you what I was actually doing during the week of E3 and why I couldn’t write up some blogs.  First off I helped out Pulp365 with their website set up. The other dude in charge of the site was attending the events, so I had to look after the site….sort of. I even made a fancy E3 hub that you can see in the image below. At the same time I was helping IGN’s Wiki team set up a ton of wikis with any new information from the press conferences. If a new game came out, we had to set up an entirely new wiki for that game. 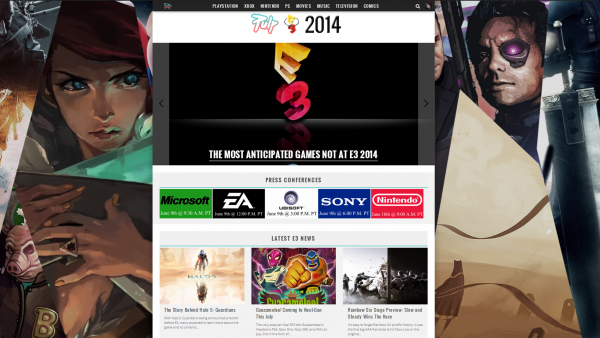 As for my thoughts on the entire event, well, I did notice I haven’t had the chance to play a number of previous games from some series. Which means there was a lot of sequel talk during the event. I understand how sequels are safer bets than actually making new games, but sometimes you get that sequel fatigue.

The five main press conferences were from Microsoft, EA, Ubisoft, Sony, and Nintendo. Lots of people were arguing over who won E3 based on their press conferences or what not, and if I had to choose I’d definitely pick Nintendo. They showed off a ton of games and had some nice comedy integrated throughout their digital event. Zelda for Wii U looked pretty great, as did Kirby and the Rainbow Curse, Yoshi’s Wooly World, and even Captain Toad: Treasure Tracker. Mario Maker looks pretty fun to tinker around with, but I’d rather play a course someone else created instead of creating one myself. I hope you can upload a course online and allow others to play it. And as everyone probably already knows, I’m definitely looking forward to Pokemon Omega Ruby and Alpha Sapphire, but E3 didn’t really show me anything I didn’t know from Japanese magazines.

The thing I hate about EA’s and Ubisoft’s press conferences is how they want to show off their games in the Microsoft and Sony conferences too. You end up seeing the same game twice with no new info most of the time!

I’m a bit curious about the PlayStation TV device, mainly because I need something to capture video from my PS Vita, and I don’t want to buy a new Vita with a capture card installed. I could just hook it up to my capture device and go from there. Hopefully HDCP won’t get in the way.

Batman Arkham Knight and Far Cry 4 look great, but I haven’t played Far Cry 3 or the previous Batman games other than Arkham Asylum at this time. Rainbow Six Siege looks VERY awesome. Rainbow Six Vegas (1 and 2) are my favorite shooter games EVER, and I hope some of the technical gameplay remains or even improves. This one looks a bit too good to be real. There’s been some websites releasing editorials about how games at E3 look far better than the final product.

The biggest surprise for me at E3 2014 was hearing how the Battlefield Hardline Beta started the day, hell, the minute the EA press conference ended. I signed up immediately and tried to install it on my PC. I kept getting an error while trying to download during the first day. I ended up downloading and installing it the next day, and I think I played it the day after. It wasn’t too bad, but I probably won’t buy it. They really pushed for the whole cops vs criminals thing in the trailers, but it felt too much like Battlefield 4 on a huge scale with a slightly new paint job. At least the game modes have been tweaked more than anything else. I don’t want to see too much military junk going on if it’s going to be cops vs robbers in Los Angeles. I did notice how you have to actually buy weapons and equipment now to unlock them.

I’m sure many people are stoked for Call of Duty: Advanced Warfare. Honestly, to me it looks way too similar to the Crysis series. I’ll probably only play it if I’m working on a guide for it.

I’m still waiting on The Order 1886, Tom Clancy’s The Division, and the new Mirror’s Edge. The team behind Mirror’s Edge (DICE) is also the team working on Star Wars Battlefront and the Battlefield games. They get stretched a bit too thing. I don’t think it’s such a good idea for these companies to waste too much time on games that won’t be out for awhile. They showed those games at last year’s E3, and they may even show them at next years if they don’t hurry up with the development.

What was your favorite conference at E3? Did you have a favorite game or announcement?