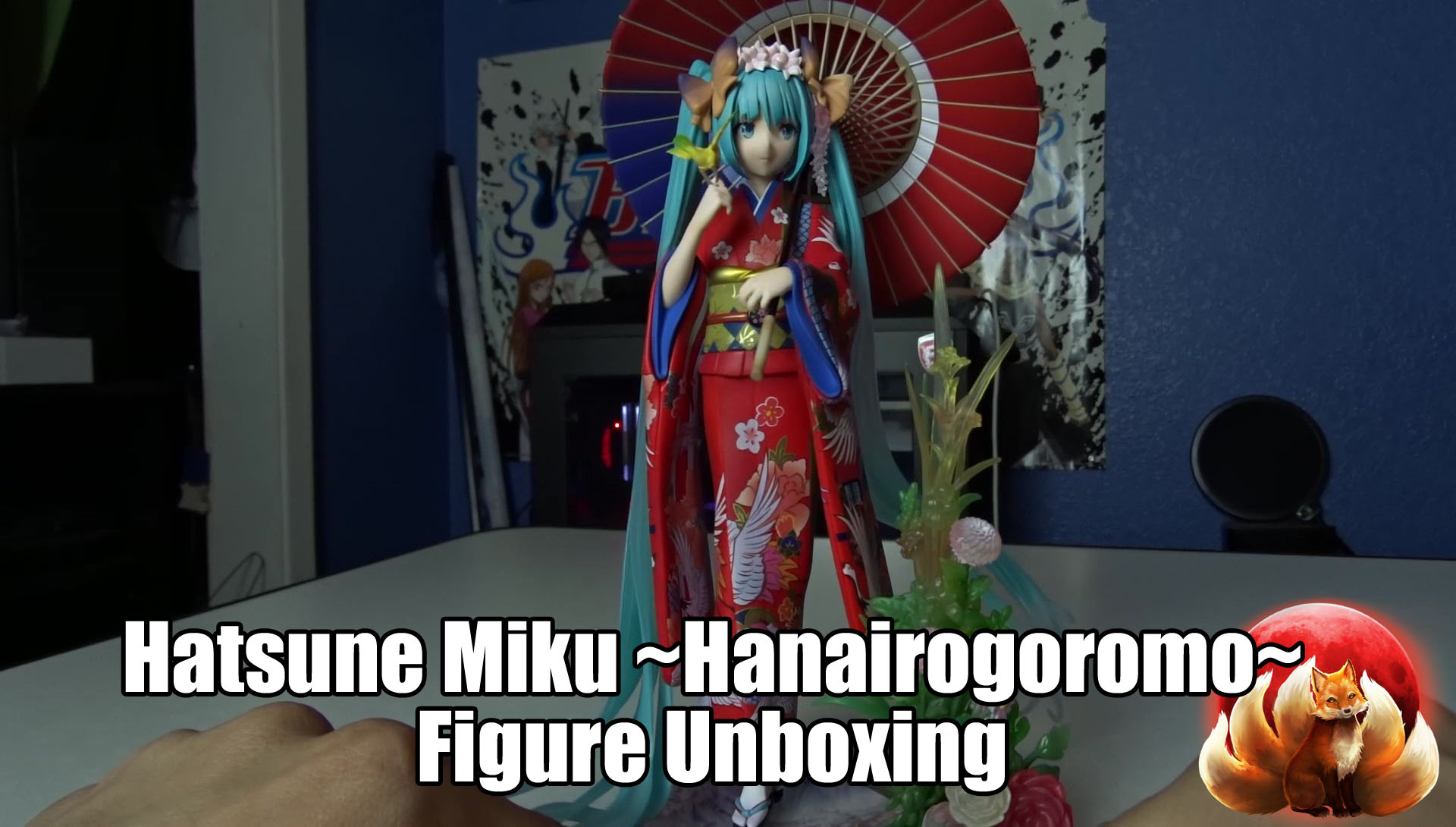 I had been tracking this figure for months before its release in February of 2017. I preordered it on Tokyo Otaku Mode waiting for the original January release date. Unfortunately, it got pushed back a month. When it finally shipped and arrived, I was so excited to unbox and add it to my collection.

This figure is often listed at the Hatsune Miku Hanairogoromo 1/8th scale figure; however, the box says SnowMiku Sky Town Figure. It was illustrated by FUZICHOCO, and sculpted by ICREA Co.,Ltd. The box has a large window on the front, and the inside comes with a beautiful Japanese garden background. It’s the same illustration as the base of the figure.

The set comes with the figure, an umbrella, a base, and some flower decoration. As mentioned earlier, the base has the same art work as the background inside the box. It’s a clear, thick plastic that is much heavier than I anticipated — it might even be glass for all I know. Two metal bars protrude out of the base to keep the figure and flower accessory in place. They’re both the same size, so they can be switched on either bar.

The flower decoration is a lot more flexible compared to the stiffer plastic that the figure’s clothing is made out of. The flowers, bird, and hair is the softest and most flexible pieces, followed by the kimono. The figure’s body, on the other hand, is very stiff. The umbrella comes separate from the Miku figure. I expected it to be held in place some way like most figures, but it simply goes between her hair and underneath her left hand to stay in place. If the figure is moved around a bit, it will most likely fall out. The umbrella is beautifully painted just like the figure is, but it looks incredibly fragile. I didn’t put it to the test, but the thin, light pieces of plastic don’t look all that strong.

This figure is absolutely astounding. It is highly detailed, beautifully painted, and is incredibly similar to the promo pictures. Even the detail in her sandals blew me away. The only negative I could find is how her hand isn’t really gripping the umbrella.

Click the video below to see full unboxing and review of the Hatsune Miku Hanairogoromo Figure at my Otaku channel.

I highly recommend it to any Hatsune Miku fan or even scale figure collector out there. It’s pretty pricey, but it’s money well spent. If you’d like to buy it for yourself, use my Amazon link below. Use my link and I’ll get a small cut. Don’t worry, it won’t cost you anything extra, it’ll go towards powering my website.