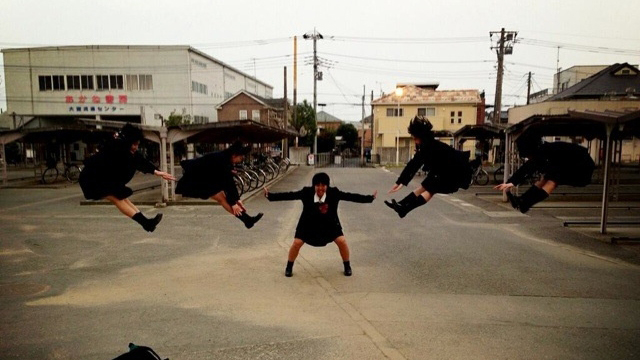 Hadoukening and Makankosappo were two types of photo fads back in 2013.  They require two people to stage an attack in mid-action, usually with one of the people in mid-air.

Hadoukening originated from the Street Fighter game franchise. A Hadouken is a blast of energy used by Ryu, Ken, and other characters.

The photo requires one person to thrust their arms out with their palms forward and wrists together. The other person (or people) jumps into the air as if being hit in the stomach by this energy. You can see examples below.

The photo fad / meme was around for several years in the east, but it became very popular in 2013 when it moved west. A website was even created called http://hadoukening.net/

Often confused with Hadoukening, Makankosappo requires multiple people to pull off, and originates from the Dragon Ball anime and manga franchise. According to Know Your Meme, the photo meme was first taken by @mkpiiii9 and her classmates on twitter. It was given the title “マカンコウサッポウ！！！！！” which means Makankosappo.

Although the true Makankosappo is more of an energy beam shot straight ahead, not an energy wave as depicted in the meme.

The photo requires one person to crouch in the center of group. The other participants must jump into the air at the same time as if hit by a wave of energy. You can see examples below.