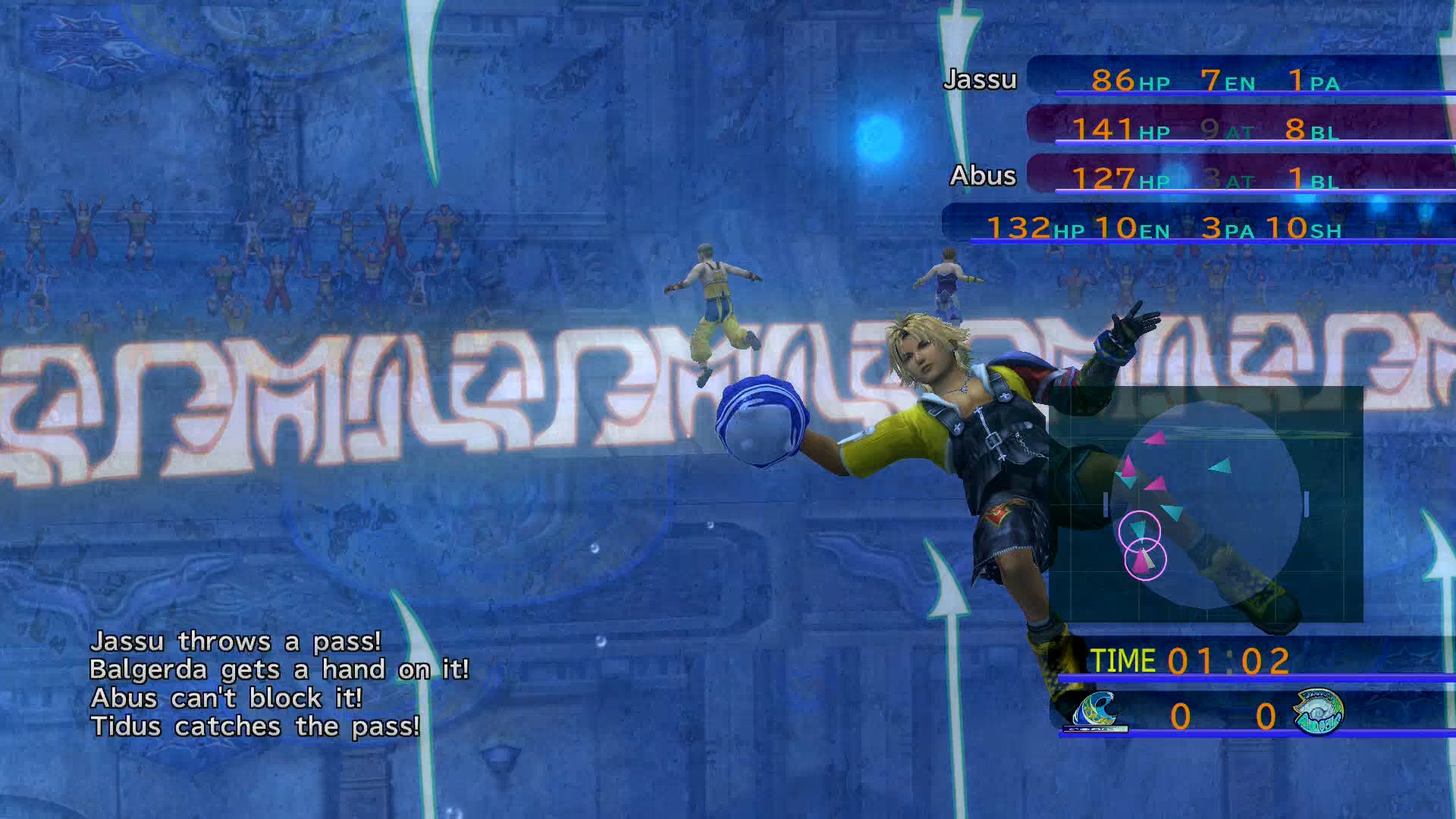 [toc]
Blitzball is an optional mini game in Final Fantasy X. It’s sort of like soccer, but played within a huge sphere of water. Five players face off against fiver players in two five minute rounds. Both teams attempt to shoot the ball in the other team’s goal past their goalkeeper to earn one point. The team with the most points at the end of two rounds wins the game.

There are three different game modes available for Blitzball. They can be played almost at any time by interacting with a Save Sphere and choosing Blitzball after visiting Luca and completing the Blitzball game storyline the first time you visit. However during certain story events, Blitzball will be unavailable.

League Season are when ten Blitzball games are played. The winner of the season is determined by total points earned. Three points are awarded for a win, and one point for a tie. You can press triangle to forfeit a game but only when your team is losing.

Tournaments span two to three matches. There are no draws, so a match ending with tied scores goes into overtime. You can press triangle to forfeit a game but only when your team is losing.

Exhibition games are for practice. No experience points are awarded for playing, but you can copy techniques (more info below). You can press triangle to forfeit a game but only when your team is losing.

There are seven different stats used in Blitzball. Each has its own purpose in the game. Stats are not always definite. Some times a player will not be able to block a shot, which means the BL stat goes completely ignored. Other times a stat may be randomly increased or reduced by 50%. So if a CA stat is at 8, it can vary between 4 and 12.

Movement is always set to auto at the start of a game, but it can be set to manual to move the player holding the ball yourself. Press triangle to switch between auto and manual. This can only be done when on offense. Manual A is movement (up, down, left, right) based on the mini-map. Manual B is movement based on what you see in the real world. 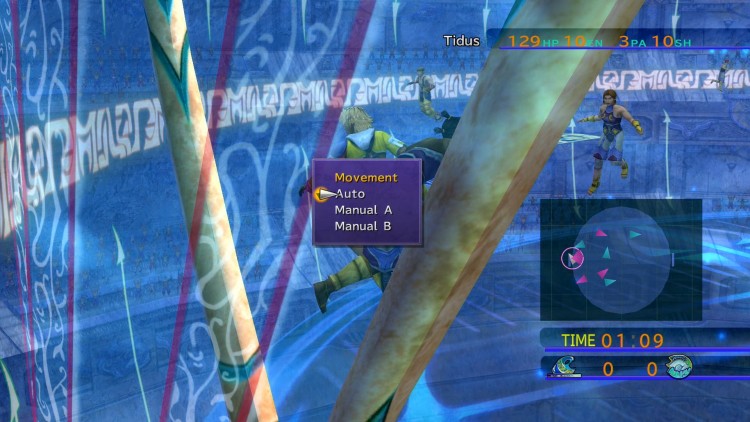 If you wish to pass or shoot, press square to open the Action Commands window. The game will always pause while a command window is open. To continue playing without passing or shooting, choose the dribble command.

Remember, all actions, including Shooting and Passing, take up HP. If HP is too low, commands will be highlighted in blue and the commands will only be half as effective. HP will slowly restore if the player doesn’t have the ball.

To pass the ball to a teammate, select the pass command from the action command window. The player you want to pass to will have their stats shown in the top right corner of the screen. Passing takes up PA of the character throwing the ball. PA will reduce as the ball goes across the field. If it reaches 0, the receiving player won’t be able to catch the ball. When the pass fails, the ball becomes loose. Anyone nearby can pick up a loose ball.

Shooting is similar to passing, but it uses the SH stat. As the ball travels across the water, it looses SH. When you choose shoot, the goalkeeper’s stat will be displayed in the upper right corner. The goalkeeper’s catching ability is represented by the CA stat; however, the actual stat can be increased or reduced by 50% once a shot is made. So if a CA stat is at 8, it can vary between 4 and 12. If there’s at least 1 SH left after the calculation, you will score a goal.

When opposing players come into contact with the ball, an encounter will occur. A command window will open if you happen to be the player holding the ball. If you choose No Break, you will get the option to shoot or pass. In addition to the water reducing SH or PA, the player(s) who is in the encounter will reduce the stat with his BL (Block) stat. If the defender’s BL stat is higher than the PA or SH stat of the ball holder, the defender will take the ball.

Another option is Breakthrough instead of No Break. Breakthough allows the defender in an encounter to tackle the player holding the ball. The AT stat of the defender will reduce the EN stat of the ball carrier. If EN is reduced to 0, then the tackler steals the ball. If however you break through the attack, you can choose to pass or shoot the ball without the defenders blocking it.

At the beginning of the game and during half time, each player can mark any opponent to learn a technique, this is called Techcopy. If you see “techcopy” flash during a game, press X at the right time to learn it. The player(s) that copies the technique is the one who marked the opponent before the match. Techcopy fails if an opponent’s level is too high.. New techniques can be equipped at halftime or at the start of the next match. 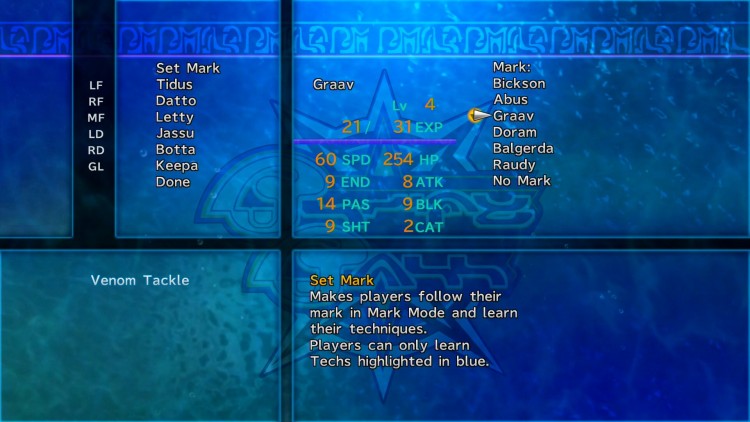 Before a technique can be equipped, a player must reach Level 3. One slot will become available at Level 3, and more will open as they rank up until a total of five are unlocked.

There are three different Status Ailments that may appear during a game due to special techniques. They are:

All players in Blitzball, with the exception of Tidus, are bound to contracts. They will play Blitzball for a team for a select amount of games. Once the contract runs out, it can either be renewed or a new player can be recruited. Each player must be paid in Gil before a contract can be made.

Various characters throughout Spira can be added to your Blitzball team. If you think you can recruit them, press square when facing them.