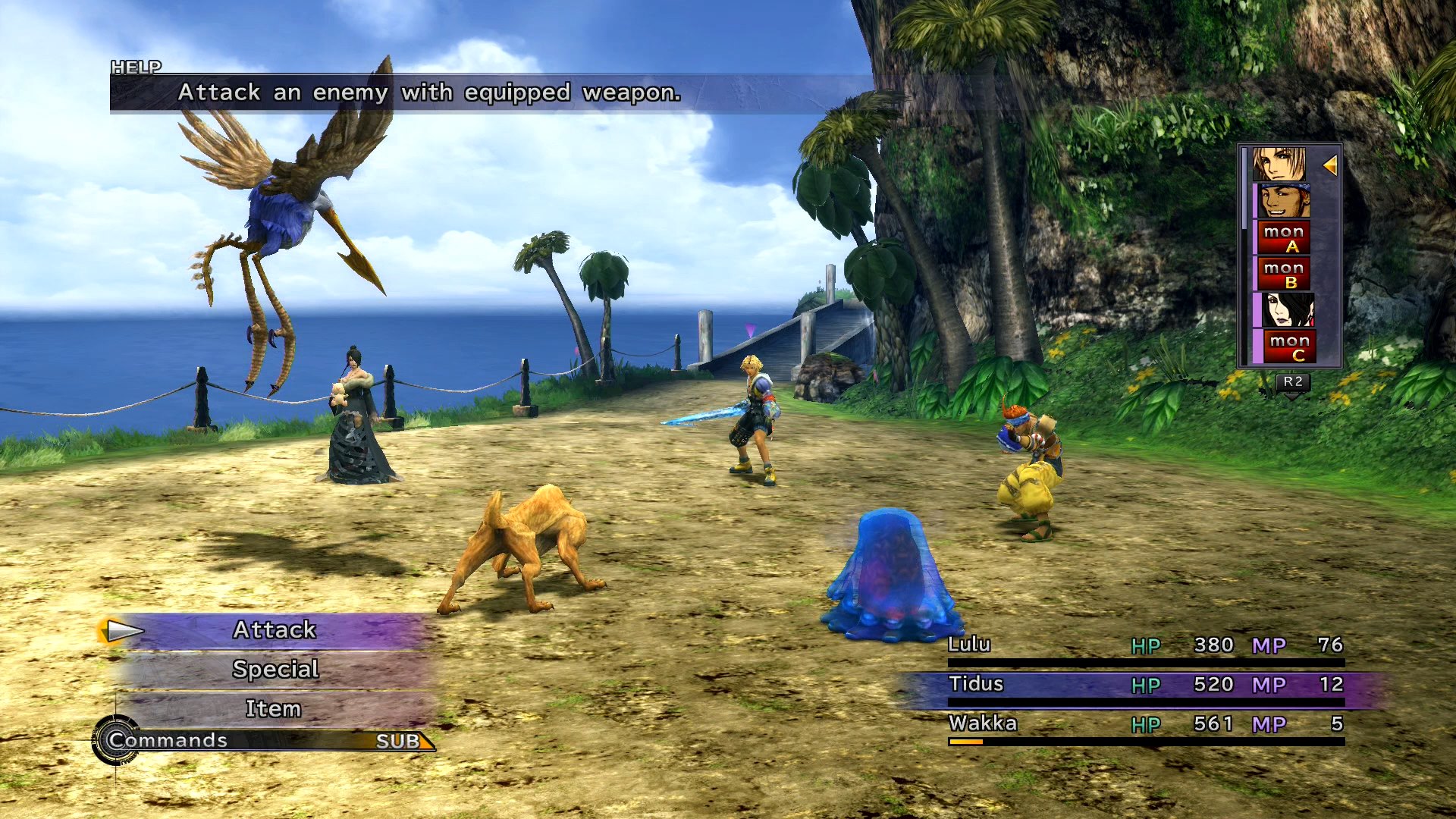 All battles in Final Fantasy X are random encounters and use a conditional turn-based system. If you’re in an area where fiends are, you will randomly start a battle while walking around. You will only receive a Game Over if all three characters are knocked out at the same time.

Once a battle begins, characters take turns against fiends. The turns will be shown in the CTB (Conditional Turn-based Battle) Window on the top right side of the scFollow the path until you see a small curve to the north. Walk along this curve to find Braska’s Sphere.reen. Use this window to plan your attacks wisely. Certain buffs and debuffs (i.e. Haste and Slow) will cause a character to attack more often or less often, and certain powerful skills may require extra recovery time for a character.

A command can be selected using the command window in the lower left corner of the screen. Attack will use a regular physical attack, Skill or Special will use different abilities, and Item will use an item from your inventory. Any option you choose will count as a turn.

Subcommand windows can be accessed by pressing left or right on the analog stick. These menus will allow a character to change their equipment during battle or attempt an escape. Escaping from battle doesn’t always work, so it’s best to use this if there’s no other option!

Additionally, a character can defend themselves by pressing the Triangle button. This will reduce damage from a powerful attack, but prevent the character from using any of their attacks. Unfortunately, this only protects the character from physical damage. Spells will cause the same amount of damage or effects.

Select Boss Battles will have Trigger Commands. If you see a “Trigger Command” option above the command window, press left on the analog stick to see the newly available options. You may be able to change battle formation or use an object on the battle field.

Once the Overdrive Gauge is full, the Overdrive option will appear above the Command window. Press Left to see the Overdrive window and select an attack. More information on each character’s Overdrive is available on the Characters page.

Final Fantasy X features four different elements. These elements can be found on select enemies, in most black magic spells, and on select weapons and armor. Use the elements to inflict extra damage or to avoid a reduction in damage. If you have a weapon with the Seek ability, you will be able to see if an enemy is strong or weak against these elements.

The table below lists all elements and which element they’re weak against. So, if you see a fire-based enemy, use an ice-based attack.

A number of ailments can be inflicted upon each character. Use the table below to learn about each ailment, the effects they have, and how to recover from them.

Defeat all fiends in battle to win the match. Winning a match will reward all characters with AP, Gil, and Items.

If a fiend is killed with much more damage than needed, you will perform an Overkill. Overkills increase the amount of Ability Points (AP) and items received after battle. Ability Points (AP) are the experience points each character earns once a battle is won. That is, the characters that participated in battle will earn AP. Gather enough AP to increase a character’s Sphere Level. More info on Sphere Levels and The Sphere Grid on the next page.