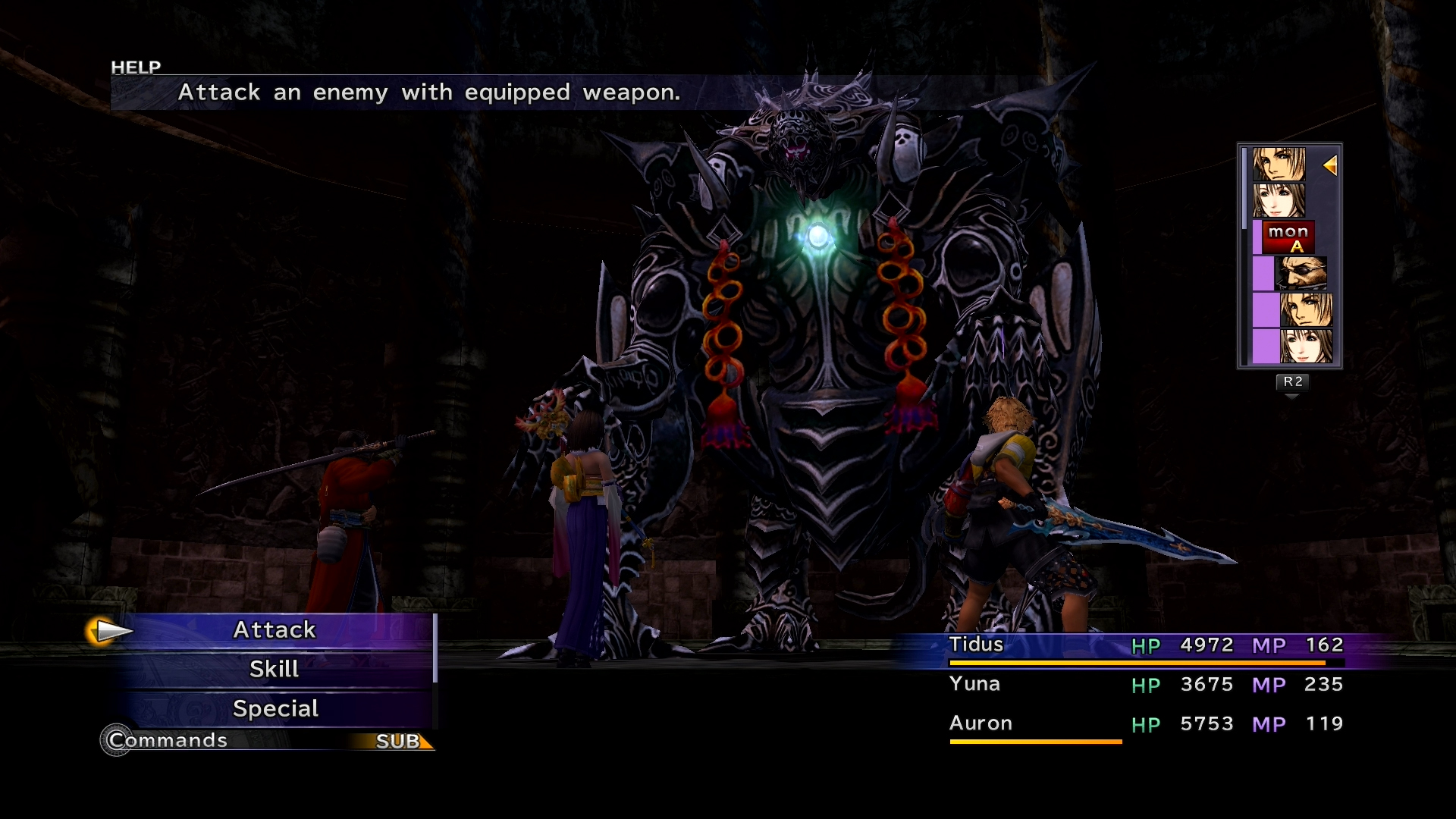 Final Fantasy X on the PS3 and PS4 contain a total of 34 Trophies. That’s one Platinum, five Gold, eight Silver, and 20 Bronze trophies. Additionally, all trophies were made into achievements on PC’s Steam platform. Below is a list of all achievements and trophies in alphabetical order.

There are a three secret trophies with hidden information. They are found at the bottom of this page, but contain spoilers! Be wary.

Eternal Calm is a video at the main menu of the Final Fantasy X|X-2 HD Remaster Disc. Watch the 15 minute video all the way through to earn this trophy.

A Talent for Acquisition

Use Rikku’s Ability to steal items from enemies. Successfully steal 200 times to earn this trophy. It’s best to use Steal against Machina enemies because that will instantly kill them.

Objective: All party members come together

The Slot Reels are Wakka’s Overdrive attacks. There are a total of four different Slot Reels.

While in the Calm Lands, speak with the Chocobo Trainer to learn how to train Chocobos. Pass all training stages to unlock this trophy.

Objective: Get 5 treasure chests during the Chocobo Race at Remiem Temple and win the race

The Remiem Temple can be reached on the back of a Chocobo while in the Calm Lands. Once there you can choose to enter a Chocobo race. While racing, open five treasure chests and win the race to earn this trophy. Make sure you’re not grinding up against the walls while racing or you will begin to slow down.

Objective: Win a race with a catcher chocobo with a total time of 0:0:0

You will be able to race chocobos at the Calm Lands after speaking with the Chocobo trainer at the northwest corner. The racing mini-game will be the third game. You must get as many red balloons as possible without getting hit by too many birds to get a time of 0:0:0. Each balloon takes three seconds off your time, and each bird adds three seconds to your time and stalls you a little.

Earn all other trophies to unlock this Platinum trophy.

The Magus Sisters are optional Aeons found in the Calm Lands. They can be found after obtaining the Airship and gaining the ability to ride a Chocobo. After capturing all of the monsters at Mt. Gagazet, return to the monster arena to get the Blossom Crown. Obtain all other Aeons and return to Remiem Temple in the Calm Lands. The next step is to defeat Belgemine’s versions of all the Aeons. Defeat Bahamut to earn the Flower Scepter, then defeat Yojimbo and Anima. With all the battles out of the way, head to the door in the back of the Temple and unseal it to obtain the Magus Sisters.

More info about The Magus Sisters on the Aeons page.

Anima is an optional Aeon in Final Fantasy X. It is obtained after completing the Cloister of Trials in the Baaj Temple, which can only be reached again after obtaining the Airship.

More info about Anima on the Aeons page.

It’s All About the Money

Yojimbo is an optional Aeon found in the Cavern of the Stolen Fayth. Defeat Yojimbo in battle, then speak to him to recruit him. You will need to negotiate a price in order to get him onto your team. After he asks for a set price, offer half that plus one Gil. After he asks for a second price, raise your price by one Gil again. Next he’ll usually accept an offer below 200,000 Gil.

More info about Yojimbo on the Aeons page.

Objective: Learn to use all enemy abilities

This trophy revolves around Kimahri’s Overdrive. Using the Lancet skill, Kimahri can learn 11 new attacks for his Overdrive.

Lightning will strike randomly while in the Thunder Plains. Press X to dodge the lightning just before it strikes. Keep an eye out for the flash of light before the lightning bolt strikes. If you can dodge 200 lightning strikes, a treasure chest will reveal itself. This chest can only be opened after obtaining the Celestial Mirror later in the game.

Objective: Deal 99999 damage with one attack

An attack can only exceed 9999 damage if using a weapon with the Limit Break ability. Obtain the Celestial Weapons and increase a character’s power on the Sphere Grid in order to reach the 99999 damage limit.

Messenger from the Past

There are a total of 10 Jecht Spheres scattered throughout Spira. See the Jecht Spheres page for a list of all 10 spheres and where they can be found.

Nemesis is an incredibly tough boss battle in the Monster Arena. To face him, you must capture 10 of every monster in Spira and then defeat all of the Species Conquest, Area Conquest, and Original Creation fiends in the Monster Arena. Talk with the clerk after doing this to unlock the Nemesis battle. I have not completed this myself, hence the lack of tips and tricks.

Objective: Complete the Sphere Grids for all main characters

To unlock this trophy you must fill every node on the entire Sphere Grid for all seven characters. This includes filling empty nodes with attribute increasing nodes. Using the Expert Sphere Grid may be more helpful here since it has less nodes.

Objective: Do 9999 damage or more in a single attack

To do 9999 damage, you must strengthen your character by going around the sphere grid and boosting their stats. Use an attack that a Fiend is weak to in order to increase your chances. If you want to do more than 9999 damage, you will need a special weapon with the Break HP Limit ability. Each Celestial weapon has this ability.

Blitzball can be played after a certain point in the game by interacting with a Save Sphere. Unfortunately, some areas of the game will not allow you to play due to the story. See the Blitzball page for more info.

Objective: Complete a Sphere Grid for one character

To unlock this trophy you must fill every node on the entire Sphere Grid for one character. This includes filling empty nodes with attribute increasing nodes. Using the Expert Sphere Grid may be more helpful here since it has less nodes.

The Jecht Shot can be learned while on the S.S. Winno, bound for Luca. Save your game after boarding the ship. When ready, interact with the blitzbll on the deck of the ship. Press all buttons that appear on screen and send the ball flying. If you do this, you will learn the Jecht Shot, which is a very useful technique in Blitzball.

Obtain all eight Aeons. See the Aeons page for a list of all Aeons and how to obtain them. The majority are unlocked during the story.

Win a Blitzball match. This can unlock during the story, or you can win a match later on in the game. Blitzball can be played after a certain point in the game by interacting with a Save Sphere. Unfortunately, some areas of the game will not allow you to play due to the story. See the Blitzball page for more info.

Objective: Buy every sphere at the Luca Theater

The Luca Theater will allow you to buy both music and movie spheres that contain scenes and soundtracks from Final Fantasy X. Buy all of these spheres from the two small creatures near the front desk in the theater to unlock this trophy.

Bribe is a Skill every player can learn on the Sphere Grid, but it first becomes available to Rikku. Use Gil to bribe a Fiend and you may earn a prize while getting them to leave the battle. Spend 100,000 Gil or more over as many battles as possible to earn this trophy. It’s best to save your game once you have 100,000 Gil, bribe an enemy in the next battle, and then reset the game once the trophy has been unlocked.

Below are the secret achievements and trophies. They all contain story-related spoilers!

The Destination of Hatred (Secret Trophy)

Overcoming the Past (Secret Trophy)