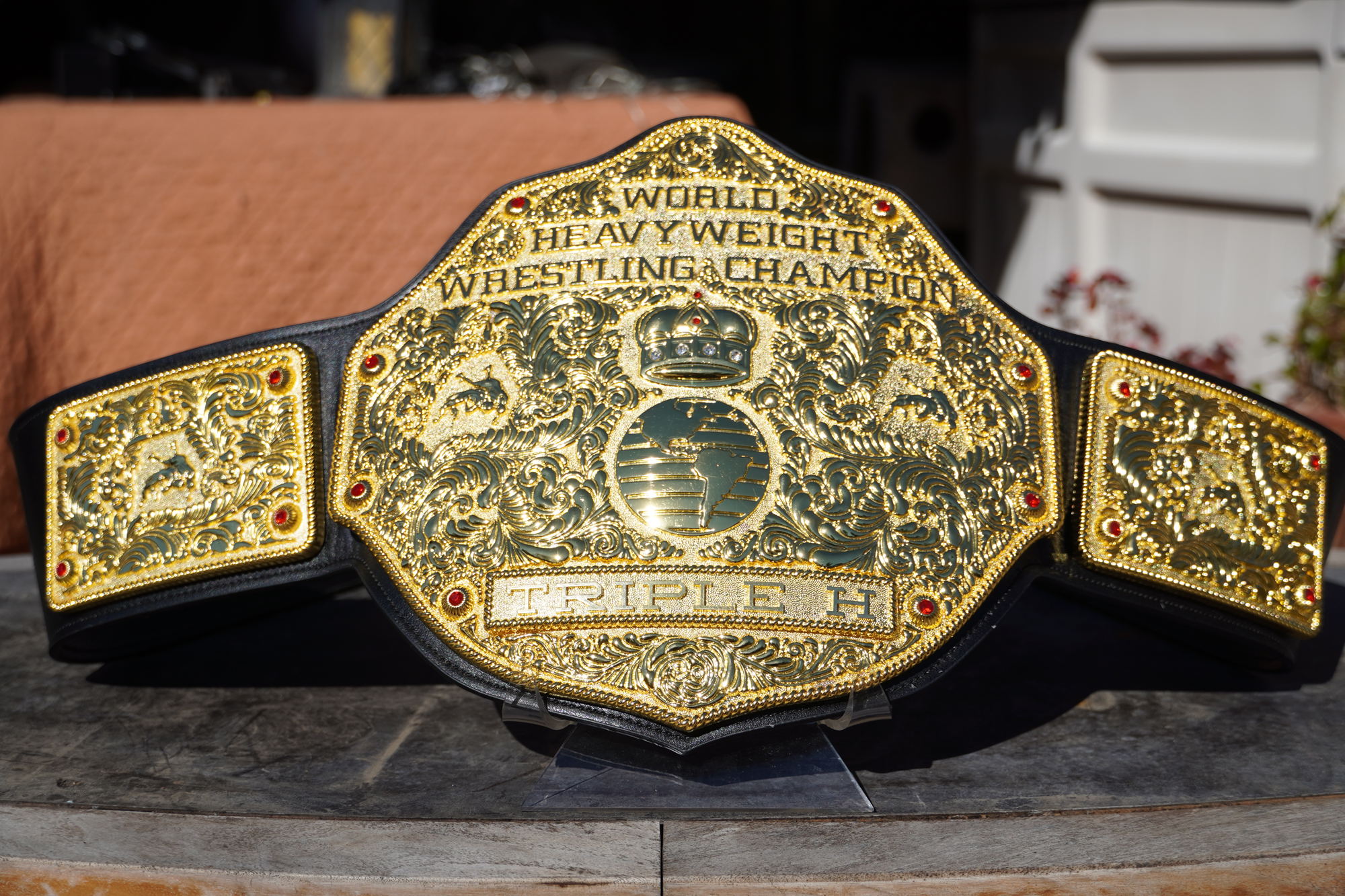 Fandu took the wrestling collector’s scene by storm with their release of the Big Gold World Heavyweight Championship replica, available in all gold, dual-plated, silver, antique, copper, and gunmetal. Take a closer look at the all gold version on regular and tooled straps.

The metal plates on the Fandu big gold replica are much thicker when compared to any other replicas from the Figures Toy Company or WWE Shop, measuring 8mm thick. The biggest difference with Fandu is the beautiful textured background instead of the typical mirror finish. Moreover, the design is 3D etched and pops out from the textured background, unlike the typical 2D etching on replicas from the competition.

The main plate is 11.6 inches tall by 11.2 inches wide. The crown is completely smooth behind the jewels, as is the globe below the crown. The famous two wrestlers appear to be etched within the main plate, instead of affixed to the plate, and both sets are facing the same direction.

The side plates are 5.5 inches wide by 3.75 inches tall, and each features two wrestlers similar to the two on the main plate. All four wrestler designs are facing the same direction throughout the entire belt.

The jewels seem to be made out of plastic and have a minimal sparkle. The jewel holders seem to be much more raised than any replica I’ve seen, but do not look authentic to any big gold I’ve seen.

Speaking of the back-side of the plates, each plate is stamped with “FanduBelts.” The belts also have Fandu Belts stamped on them, but the stamp on the belts have more of a design and logo.

The big gold comes with either a plain black strap, similar to the original WCW Championship, or a tooled black strap with red croc backing, similar to the final version of the WWE World Heavyweight Championship before it was retired. The straps come in faux leather or real leather, and measure 56 inches long. The straps in all the pictures are faux leather, and the red croc backing feels like some-sort of plastic.

Blank name plates are available or custom nameplates with up to eight letters can be chosen when purchasing a replica belt. The letters are etched outward and feature the same textured background as the rest of the belt. Different types of nameplates can be ordered to match the different styles of big gold replicas: all gold, dual-plated, silver, antique, copper, and gunmetal.

The Fandu big gold weighs approximately seven pounds and is a magnificent replica for the price. The main downside is that it is too small when compared to the dimensions of the real big gold world heavyweight championship, and the main plate is more domed than curved or even flat. The Fandu Shop offers another version called the Luxe that is much more expensive and much more accurate to the original big gold world heavyweight championship, but that version is not shown in this post.

See my video review of the Fandu Big Gold World Heavyweight Championship below.

All in all, the Big Gold from Fandu is a magnificent replica similar to the first WWE World Heavyweight Championship design around the time the first ever elimination chamber was introduced. The price and the quality has seemingly forced their competitors to up their game, which is a good thing for all collectors!