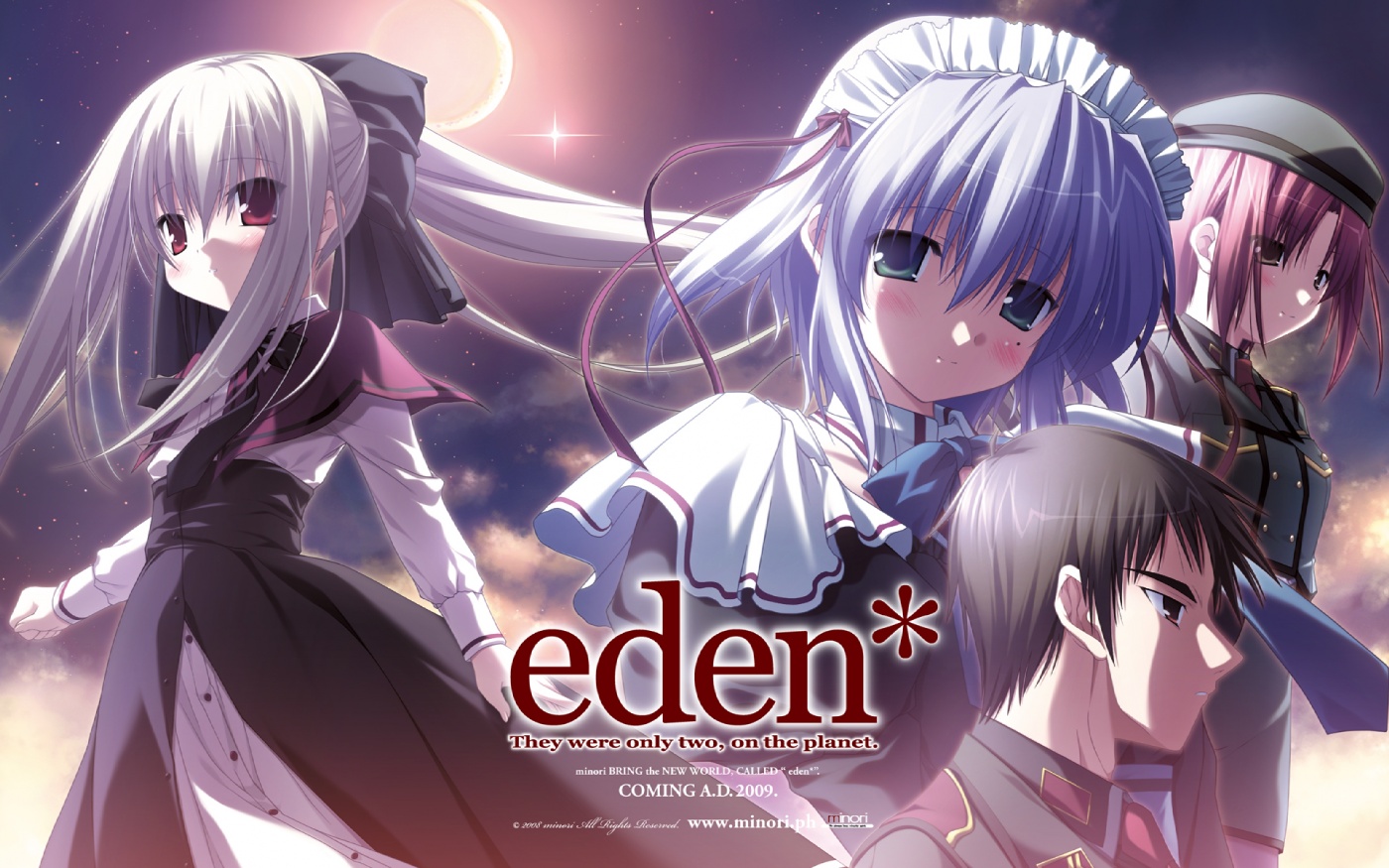 Eden* Review – They Were Only Two, On The Planet

Curious about the visual novel Eden* They Were Only Two, On The Planet? This Eden* Review will tell you everything you need to know.

Eden* They Were Only Two, On The Planet is called Earth’s last love story. Naturally, I expected a beautiful romance story, maybe with alternate endings based on choices in the game. After 15 hours of “playing” this magnificent and terrible game, I’m here to share my experience in review form!

There’s a terrific synopsis of the story on the official website, so I figured I’d share it instead: 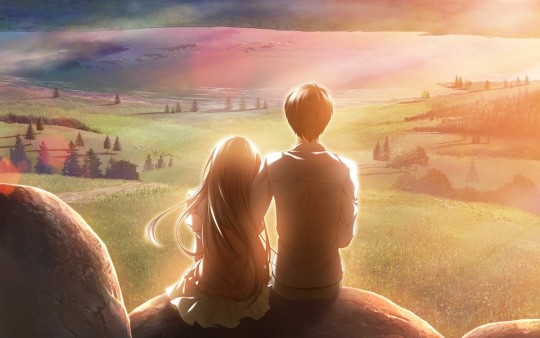 ––The final love story on Earth.

In the distant future, a gigantic energy mass called the “star of destruction” suddenly appears near Mars. Its effects rain down onto the world causing abnormal weather and changes in the Earth’s tectonic plates. Conflicts break out all around the world as resources become scarce and populations have nowhere to go. But this is only an omen of things to come.

100 years remain. Mankind plans to evacuate the planet in order to evade its destruction. Two projects are drafted to meet that end.

First is the establishment of Earth’s Unified Government to implement the project itself. Evacuating Earth becomes a top priority and a policy of sacrificing the few to save the many is put into place. Authoritarian rule controls the masses. Nations and organizations which obstruct the establishment are oppressed through military force. Every possible point of division, race, religion, food, and energy is pacified through the iron fist of the military.

Second is the “Felix Project” which will serve as the foundation for the evacuation of Earth. Though only a scant 100 years remains, mankind will perish if it is unable to create the massive colony ships necessary to leave the planet and survive in the vacuum of space. They settle on producing superhumans capable of making the seemingly impossible project a reality–genetically altered beings designed to possess high intelligence, and perpetual youth and longevity: “Felixes.”

99 years pass… A lone female felix served as the central figure in the Earth Evacuation Project. She devoted her life to research for all of mankind. With her job now completed, she wishes to spend her remaining time quietly on Earth, now devoid of all humanity. A young man from the unified military is deployed to her side, his job is to protect her and to make sure she never gets away.

Their meeting sets the story in motion.

This is a tiny tale of a girl and a dying planet.

The first thing I must note is this video game is a visual novel only. There are absolutely no choices anywhere in the entire game! All you can do is read the English text at the bottom of the page and watch the mostly still images at the top while the Japanese cast act out the scenes. The story lasts for roughly 15 hours, but may vary depending on your reading speed.

Some text is not voiced, like the thoughts in the main character’s head, but the majority is spoken and acted out. You can select which characters aren’t voiced in the settings menu if you don’t want to hear a voice or if you prefer to read some parts in your head. 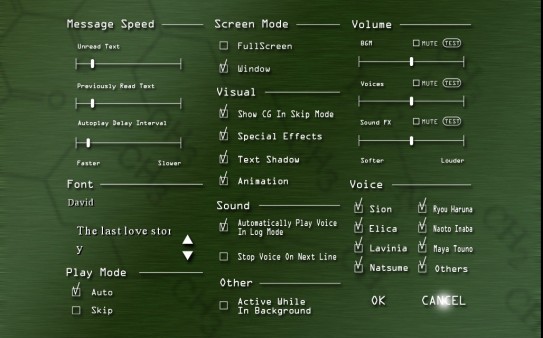 If you missed a part of the story by pressing the next button on accident, or if you want to re-read something, you can always scroll up. That’s a great feature I wish all visual novels or story-filled games had!

The game has both quick save and regular save options with a total of 12 save slots.

After completing the game, you have access to all 32 songs, the intro video, and eight full pages of images from the game. The characters’ faces in the images can be altered with a left click of the mouse, and some images have a portrait aspect ratio that allow you to scroll up and down.

The majority of the music in Eden* is absolutely beautiful. Many songs are soothing piano tracks that fit nicely into the background of a scene. Each song repeats until the next scene begins, or until some event happens that changes the music. However, none of the songs loop perfectly into each other. Each song comes to a complete stop before starting again.

The art work in the game is beautiful. Each character is drawn magnificently, and the use of environmental light make scenes really pop. 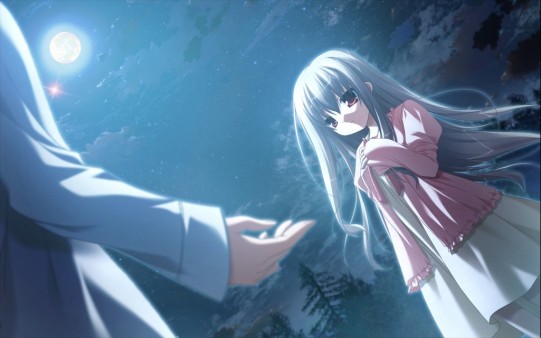 The only issue I have with the style is how each character’s mouth barely opens when speaking. Most of the time when a mouth is moving, it’s only about twice the size of the closed mouth, which is incredibly small to begin with!

As I mentioned earlier, all voices in Eden* speak Japanese, there aren’t any English voice options at all. With that being said, that voice actors are pretty great at what they do. There are bubbly characters, serious characters, and somewhat comedic. My only issue is that the main character’s voice actor is terrible when it comes to expressing anger. Other than that, each actor fits their character nicely, and Sion’s voice actor has almost a melodic way of speaking that should captivate most men.

The English text translations at the bottom of the screen are great for the most part, but there were a few flaws here and there in spelling or grammar.

The story is told through the eyes of Ryou, a male solider who joined the military seven years ago looking for his sister, Natsume. Natsume was taken away by the military when Ryou was still young, and he was told that the only way to see her again was to join the military and climb up the ranks.

After a short (about 30 minutes) intro, the story backtracks a few months to how Ryou and a girl named Sion got to where they are now.

Ryou was stationed at a peculiar-looking mansion on a remote island. He quickly learns his duties involve protecting the famous girl named Sion, a Felix (a highly intelligent, genetically modified human) who is in charge of the Earth evacuation project. She’s been in the mansion for nearly 100 years helping mankind. 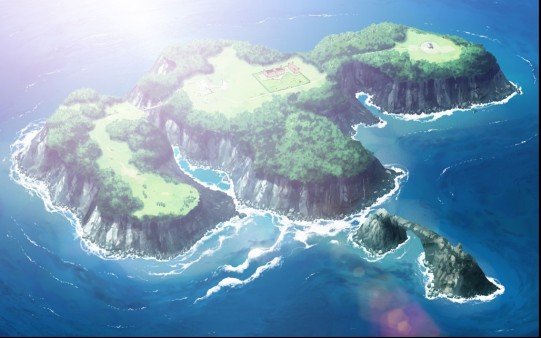 There are only three other main characters within the Mansion, Major Inaba, Warrant Officer Lavinia, and a peculiar maid named Elica. Since there are such few characters, the story doesn’t get too complex. Most of the dialogue throughout the entire game is between two characters at a time, as well.

The story is actually incredibly slow, but at the same time it’s rather steady and even careful. It focuses a lot on character development and back story before going forward. It even makes sure not to leave any plot holes by addressing issues from the past almost immediately during a conversation.

Nevertheless, some areas seem like they could have been cut to save time. Perhaps the developers wanted you to get attached to each character on a more personal level by spending a lot of time with them, listening to their thoughts and personality. Whatever reason it was, I felt the story dragged on at some points, and I even felt drowsy reading so much. There were only a handful of times when something exciting happened, and when those exciting times came I couldn’t step away from the screen. Of course, since the art work is mostly stationary screens, all the real action was written out.

After about eight hours, the story catches up to the events from the prologue. The story lasts for about another seven hours before coming to an end, and boy what a heart wrenching end it was. You think you know where the story will go based on the events, but you’re not 100% sure due to some of the circumstances and people’s points of view. 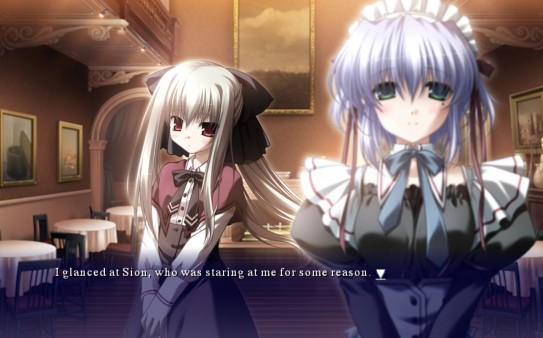 Eden* calls itself the final love story on Earth. Honestly, I was wondering if the story would ever even lead to romance. But eventually, the story does lead to a rather romantic place.

I highly recommend Eden* to those who love romantic visual novels, but mostly to those who have the patience! Not only is the story rather long, but some scenes seem drawn out more than they should be. At the same time, there’s plenty of character development. If you’re someone who wants a story told with little backstory or diversions, this game is not for you. Those who can stick it out, definitely pick this game up! The music should also keep you entranced while reading all the dialogue.