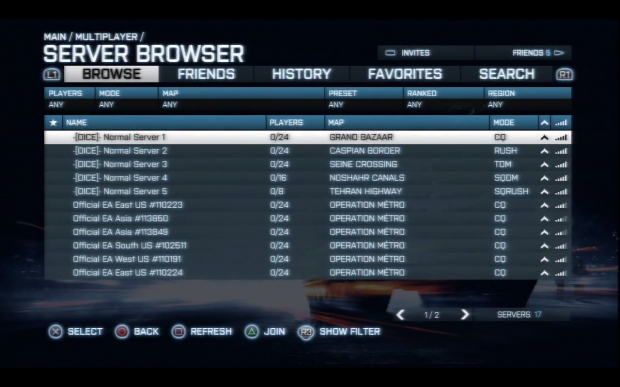 Battlefield 3 has Dedicated Servers. Modern Warfare 3 does not. Lets look into that a bit further.

So what were the numbers? After a month, EA announced Battlefield 3 had sold 8 million copies. Since then, they have gone on to say they’ve sold 10 million copies total. If you go to their website right now (Battlefield.com) you can see a big banner that says “Over 14 million have played.” I tried looking for sales numbers for Call of Duty: Modern Warfare 3, but it was pretty tough. They just kept talking about how much money they made, percentages of sales compared to the last game, etc. They did say they sold 6.5 million copies in the first 24 hours, but I couldn’t find more numbers after that. An article on IGN had them estimating around 16 million being sold. LINK.

So, obviously, the amount of players doesn’t really have anything to do with it. If you look at actual cost, Call of Duty is raking in more money than Battlefield with many of their stupid schemes. Don’t get me wrong, EA has their own ways of making money off of the players, but at least you know you get something good like the ability to rent your own server on Battlefield 3! With Modern Warfare 3, they slapped their name on every little thing they could and sold it. Massive partnerships, useless items, and the more useful (kind of) COD Elite. Note that Battlefield 3 has a similar service that’s entirely free. The only difference is COD Elite allows you to get their DLC for free as long as you’re a paying member. So really, you’re paying for all their DLC, if you want it or not.

I think this turned into a bit of a rant, but I made my point. I don’t think Call of Duty should have any excuse as to why they don’t have Dedicated Servers! If I missed something, please tell me.