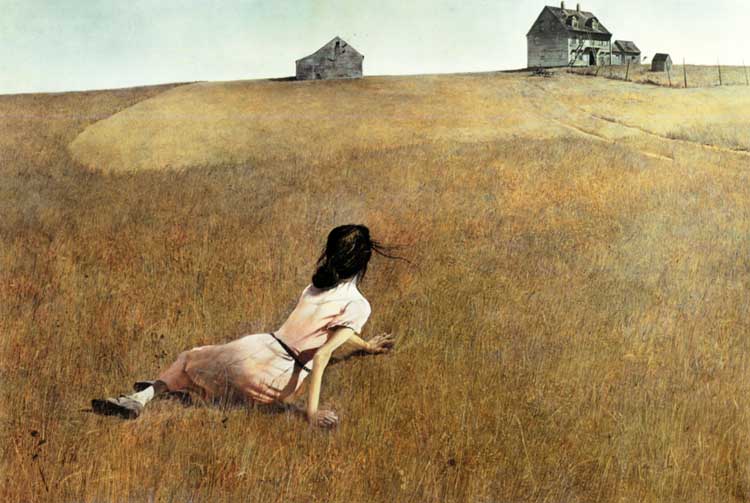 Crystal Clear is a short story of a young girl who wanted nothing more than to escape the farm she grew up on. Would she have the heart to leave everything behind?

Christine was a young and innocent girl from the heartland of America. She had fair-skin with light-brown freckles on her cheeks and nose, and beautiful, flowing dark-brown hair that extended down to the middle of her back. She came from a humble family, the Dapples, who had been farming the same land for generations. She and her parents, Edgar and June, even lived in the same old farmhouse that her great-great-grandfather built with his own hands.

After decades of farming, the land had lost most of its fertility. It seemed like a barren wasteland with brown grass as far as the eye can see. Despite this, Christine’s parents refused to move on. “It must be the lack of rain,” her father would say. He would blame anything other than the land he was born and raised on. Edgar was far too loyal to the land after all these years. Christine knew the truth, and she wondered how much longer she could keep up the same routine.

Day after day, Christine would wake up, walk down the creaking stairs and out the front door to begin her daily chores. “One day this whole house is going to fall apart,” she thought to herself. Christine was born in this house sixteen years ago, but it never looked new to her eyes. It was a very old house, after all. Dirty white and worn out wooden panels made up the sides, and a brown, crumbling wooden roof would barely keep the rain out during the rainy seasons.

Most days were spent staring straight through her favorite quartz crystal, imagining what the world might look like if the land was still fertile, or maybe if her house were brand new. Her father gave Christine the quartz crystal on her fifth birthday. She tied a black string around it and wore it as a bracelet every single day. “I wish this crystal could show me a better life.” Her dark brown hair would eventually blow in front of the crystal, obscuring her view and slowly bring her back to reality. “Brown, just like all the dirt and grass around here,” she would say quietly to herself.

The Dapples owned many acres that stretched far across the land, yet Christine felt imprisoned there. Her parents would never allow her to leave the property, so she barely had conversations with anyone outside the family. There wasn’t even another house for miles. Sure, the family would have an occasional guest, but it was hardly the right way to experience life.

That night at the dinner table, Christine gently raised her voice, “Mom, Dad, have you two ever wanted to do anything besides farm these hills?” Christine’s parents looked at each other, knowing full well where this was heading.

“Sure,” June replied, “We all have dreams, but that’s all they are. Dreams are nice to have, but you must remember to keep yourself based in reality. Farming is what we know and what we’re sure of.”

“But the land is dying.” Christine said as her voice began to pick up. “Surly you realize this. It’s a fantasy to keep farming here when you know…”

“The land is not dying!” Edgar quickly shot back. “It will be better next year. Mark my words.” Edgar huffed and puffed and looked down at his dinner.

June looked back at Christine with gentle eyes. “Don’t worry, things will get better. We just have to keep working at it. Someday this will all be yours. We can’t abandon it now.”
Christine’s brow furrowed. “I don’t want it,” she said mumbled to herself.

Edgar and June stopped eating immediately and turned to Christine. “You ungrateful girl,” Edgar said. “After all the work we’ve done! If you don’t want this land, then what do you want?!”

“I want to go out and explore the world! I want to meet as many people as I can!” Christine never talked back to her father in this way, but she felt a fire rise up inside her like never before. If she didn’t say what she felt now, she may never do so again.

“What you see in your dreams is nothing like what is really out there in the world,” Edgar said in a low, angry voice. “You’ll regret leaving. Once the crops come back, you’ll be glad you’re here and not out there.”

Christine stood up and left the table. She rushed up the stairs to her room, slammed the door, and jumped into her bed. Anger and disappointment mixed deep within herself. Her mind was flooding with ideas of what to do next. “Nothing I say will ever change their minds.”

Christine spent the rest of the night in contemplation. She knew if she were to stay in that little old farm for one more season, her parents would have to take her to an insane asylum. “It’s time I act,” she thought to herself within the comfort of her quilted blanket. “First thing tomorrow morning, before ma and pa wake up, I’ll begin my adventure far away from this place.” Christine held her crystal close to her chest as she drifted off to sleep. Hope was building in her chest, overcoming the sense of fear and anger.

The next morning, Christine left the safety of her home with nothing but a pink dress on her back, brown shoes on her feet, and her crystal around her wrist. She didn’t know what she was going to do next or where she would go, only that she had to leave this place.

“This is it,” Christine thought to herself. Christine ran across the field with increasing speed. Faster and faster she ran, not daring to look back. Just then, she felt the old string around her crystal snap. The object she held so dear for the past eleven years disappeared into the brown grass. Christine quickly turned around and dropped on all fours. She didn’t care if her dress became dirty, she needed to find that crystal. She looked hastily with a growing sense of panic. She knew her parents would look for her once they woke up, which could be within the hour. She needed to continue moving. For a brief moment, she stared at her old home, the home she was born in, the home where she learned everything she knew. She remembered all the great moments growing up on the farm under the comfort and watchful eyes of her parents. The memories were pulling her back. She knew if she were to set eyes on the old farmhouse again, it would be hard to continue on. A few words escaped from Christine’s mouth. “I can’t. I mustn’t.” With misty eyes, Christine slowly stood up before running away as fast as she could.

This is another creative story I wrote for English class. The assignment was to choose an image and create a story based off it the image alone. I chose this image at the top of this post. You can find it here on Swoyersart.com