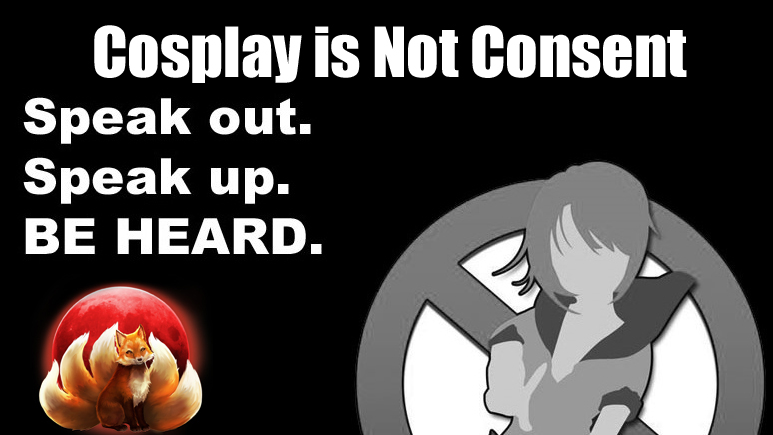 Cosplay is Not Consent – My Thoughts

Cosplay is Not Consent is an important topic within the cosplay community. Here are my thoughts on the subject and whether or not I agree with the message.

As promised, I continue with my series of blogs and vlogs centered around cosplay and the community. Remember, at this time I have been cosplaying for just under one year and have only been to two conventions (six days total).

For those that are unfamiliar, Cosplay is Not Consent is an organization and an idea to protect cosplayers. The main idea is that nobody should be verbally or physically harassed just because of what they’re wearing. 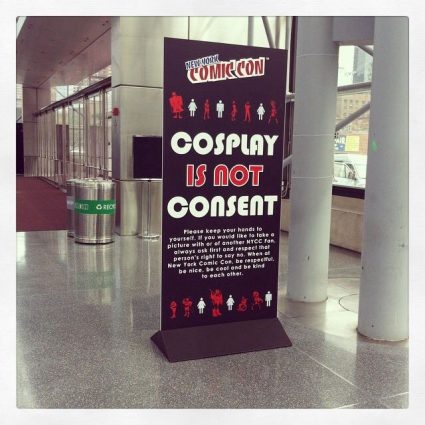 I’m not entirely sure if the idea or the organization came first, but I do know the organization is prone to absolutely horrible marketing. I was able to find a Facebook page that had a URL to CosplayIsNotConsent.org, but the domain redirected to an average tumblr page. For a topic this serious and this big, you would think they’d have their own website for better organization. Their Twitter account was even harder to find and hasn’t been used in two years. Furthermore, some of the wording in their mission statement was pretty hard to understand. 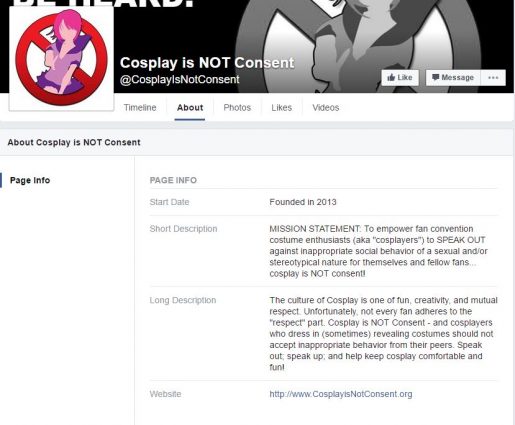 But I didn’t write this blog with the intent to belittle the organization. The important thing is that the message carries on with or without them. Yes, there are pretty much always rules at conventions that would negate a need for Cosplay is Not Consent, but speaking about it brings the issues to the forefront. 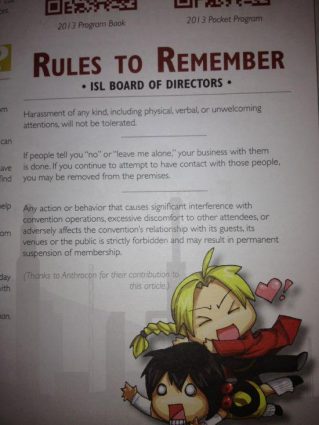 When it comes to the idea of Cosplay is Not Consent, I am behind it for the most part. We should not be physically or verbally harassed just because of what we wear. I can’t say I’m fully on board with some of the ideas behind Cosplay is Not Consent mainly because of the wording that has been used. Simply making people feel uncomfortable is automatically harassment? I disagree. I know we’ve all been apart of awkward conversations where we wish we didn’t say something we did, either at that time or a bit later. Did we really mean harm? Probably not.

Another thing I’ve noticed with conventions is how many teenagers are around. Where there are teenagers, and couples, there is bound to be some sort of drama. I’m sure people will say this isn’t what Cosplay is Not Consent is about, but that’s why I say I’m worried about some of the wording. People have taken things like this before and have run with them. Simply having unwanted attention, feeling uncomfortable, and running to safe spaces isn’t the right message we should be sending.

The entire convention should be a “safe space,” and we all agree that cosplay should be all about fun. However, sometimes things come up that I don’t believe would go against Cosplay Is Not Consent, but some would say they’re feeling uncomfortable because of a conversation and you’re kicked out. This is all vague hypothesizing, so let’s get specific.

A better example would be with staring. I believe we have to live with people staring at us. Wearing costumes any time outside of Halloween always attracts attention. That’s just part of the lifestyle. Then there are times when people feel the urge to look because someone is attractive in their eyes, and they want to stare a bit. Some people can’t help but stare, but they mean no harm.

Now, if someone is staring for an extended period and you are being followed around the convention, you may want to speak out. That could leave to something bad, so it’s often best to find a volunteer or security. Traveling in groups is also a great idea if you feel vulnerable. Some might highly disagree with this, but personally I would confront the person and ask (politely) if they needed something. You must remember that many people who go to these sort of conventions are often unsociable, and it’s a possibility they want to speak with you and are working up their courage to do so. This is just my perspective from the point of view of an Otaku. Of course, that is not always the case! That’s why it’s important to know where you and help is. 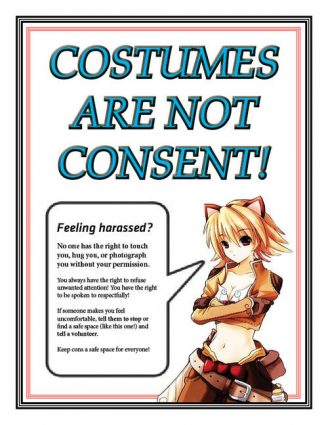 I also believe it’s really important to remember how to convey the message in addition to the message itself. There are a lot of people who don’t understand some of these rules to both Cosplay is Not Consent and people in general. I mentioned in my last blog, 10 Things I Learned About Cosplay, that I didn’t realize some people do not like to be touched at all. This includes hugs or a simple tap on the arm. It’s important to tell people how you feel so they can understand. Do not speak down to them as if they are a child and do not speak to them like they are the dirtiest scum on the earth or else the message will be lost on them. Education is always important, and many people will shut down if you don’t communicate the message well enough.

Then there are times when you will meet some people who are naturally bad, know what they’re doing is bad, and continue harassing people. When you meet these people, you cannot teach them about Cosplay is Not Consent. Changing their minds is not an option. The only thing you should do is go to security.

Luckily, I have not seen any horrible harassment in the short amount of time I’ve been to conventions. The worse I’ve seen is a teen taking pictures of cosplayers through a glass door without asking. I notified the cosplayers, and they seemed to be okay with it. I did hear of some issues from the very same conventions I went to, but only online after I had returned home. If you are a victim of harassment, don’t hesitate to find security and notify them. It’s important to speak out so others do not get harassed and these people can be dealt with.

One of the bigger issues I heard about had to do with people who didn’t even pay to go to the convention. They were some random people off the streets harassing cosplayers within the convention hall. That’s a perfect opportunity to notify security! You do not have to get into a physical fight, and it’s not a good idea to use any sort of weapons — this includes tasers and pepper spray which you would normally use on the streets to combat harassment. Often times conventions are packed with people, and using pepper spray or tasers could harm a large amount of innocent bystanders.

A final note I want to make clear is just who harasses who. Some might believe only men harass women, but women can absolutely harass men, men can harass men, and women can harass women. I’m not sure which is more prevalent, but don’t assume it’s only one way and never the others. It’s important to hear out anyone who is being harassed, and they should not be dismissed because of their gender or size.

That’s about all I have to say about Cosplay is Not Consent and my thoughts on the matter. Do you agree or disagree with what I’ve said? As I mentioned in this article, it’s always great to talk things out. Feel free to leave a comment below telling me your thoughts.