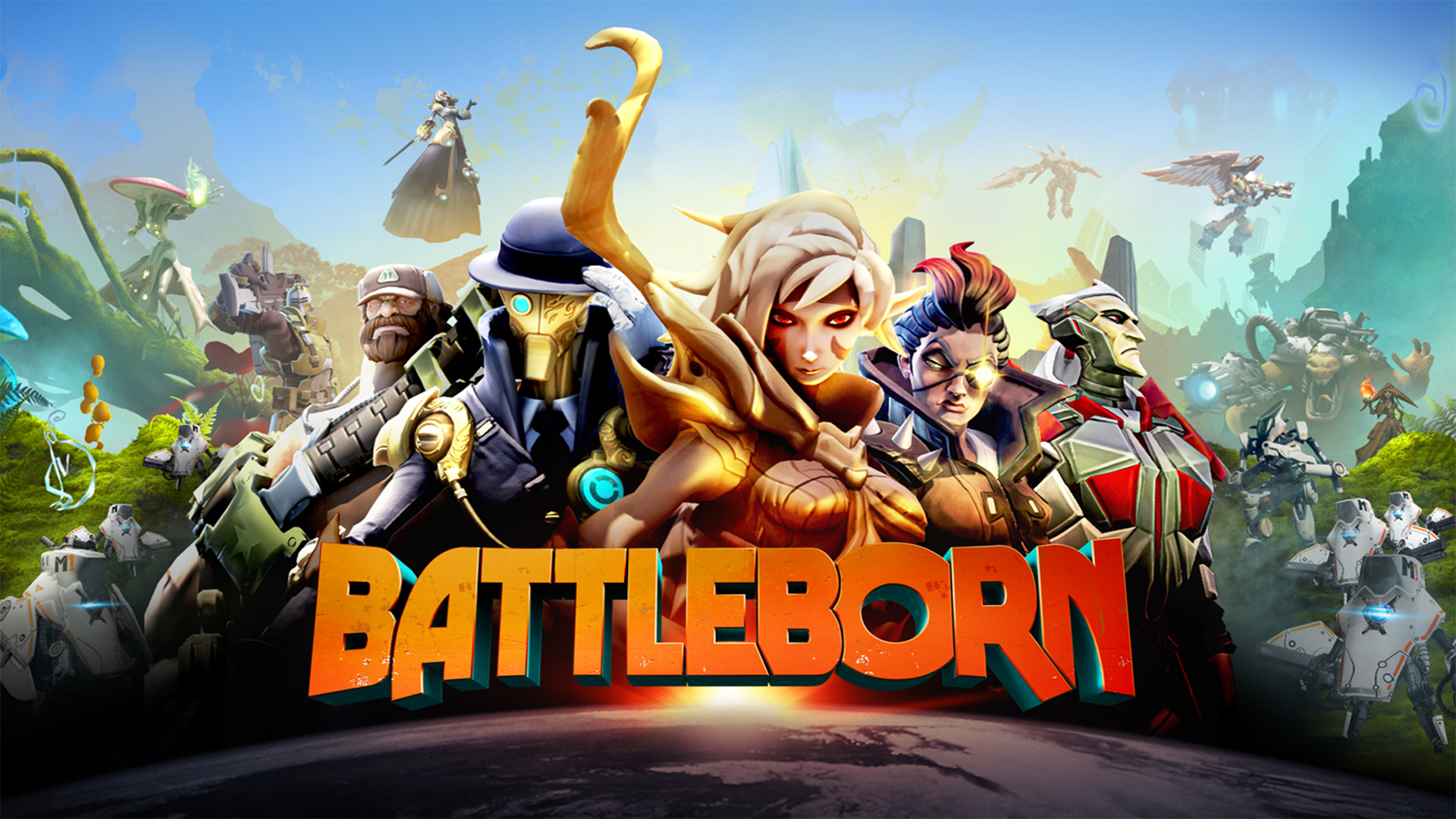 This new MOBA has gained a lot of attention recently, but how does it play? Is it worth the price tag? Here’s my Battleborn Review.

Battleborn has received a lot of mixed reviews from gamers who’ve played the beta. The release date kept getting pushed back, but the developers were giving a ton of information on their official site and YouTube channel. Now that I’ve played the full game from top to bottom, I felt I should give a quick review for those who are still on the fence.

The best thing about the game is the 25 Battleborn Heroes. The Heroes are the unique and diverse characters you play as in both single player and multiplayer. There is a character with beam sabers, one character with a shield and ax, another with assault rifles, and many more. Of course, there are also support characters in addition to attack characters who heal and provide shields. 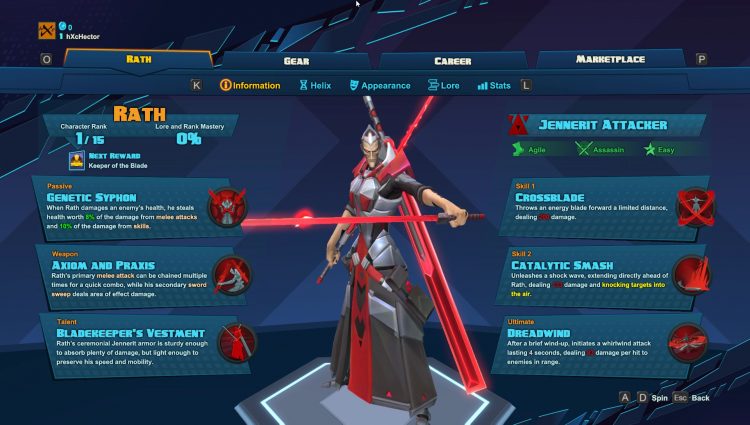 A handful of characters are available at the start of the game. More can be unlocked two different ways. The tedious unlock method is to reach a command rank by earning experience in multiplayer game modes or the story mode episodes. The fun unlock method is to complete challenges, such as win five matches with characters of a certain faction or complete each story mode episode with a silver rating.

Each character has a weapon, talent, passive ability, two normal skills, and an ultimate skill. The ultimate skill won’t unlock until you reach helix level 5. The helix levels are another really interesting thing about Battleborn. Each character can rank up 10 helix levels during each multiplayer match or story episode. Once a new rank is reached, one of two upgrades can be chosen. The helix level is then set back to level 1 at the beginning of the next match. A third upgrade is made available once the Battleborn Hero reaches a certain character rank. Just to avoid confusion, there is a command rank for your entire profile, a character rank for each 25 Battleborn Heroes, and a helix rank that’s only available during multiplayer games and story episodes. 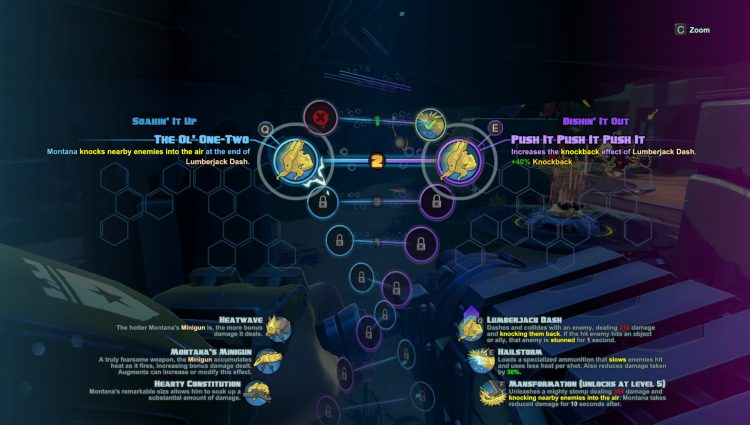 The meta game is simple enough — maybe even a bit too simple. In addition to the helix levels and upgrades, you must obtain shards from the battlefield while playing the game. These shards are used to build things such as turrets, healing stations, and small posts that give speed boosts and shields. Each buildable must be created at select locations, and can be upgraded two times in multiplayer. The story mode also has trap and drone buildables. 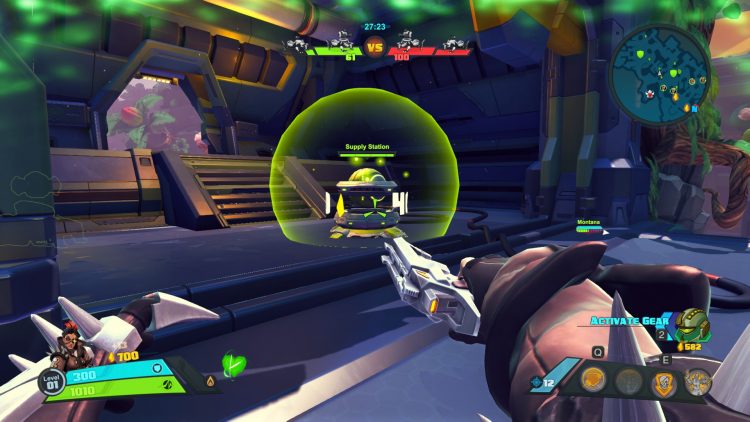 Shards are also used to activate gear, which can give you different boosts while playing a game. The better the boosts, the more shards are needed to activate the gear. Gear is obtained through random packs that are bought at the marketplace with in-game currency. Micro transactions aren’t available just yet. These packs contain gear, skins, and taunts. The gear is the most useful stuff, of course.

That’s really all there is to the meta game. I guess it’s solid, though pretty simplistic. I really dislike in-game currency that’s used for packs of random stuff that might or might not be helpful. I only want to unlock stuff I need in the game.

Now onto the game modes in Battleborn. The base game of Battleborn comes with three different game modes. Each game mode is five vs five, and you cannot switch your Battleborn Hero in the middle of the match. You can play online with and against real players, or you can play private matches with AI teammates and opponents. The game modes include:

Two of the three multiplayer games can last really long if it’s a fair fight between the two teams. The third game mode, Capture, often ends quickly and around the same time.

Battleborn’s story mode is a mixed back of awesome and boring gameplay. The great thing about the story mode is the fact that you can play with other teammates. There are a total of eight missions, nine if you count the prologue. Most missions are linear paths through waves of enemies until you reach a boss battle. The bosses often have certain strategies that must be followed to defeat them, so using an all out offense isn’t ever the way to go. The boss battles are the best part of the story episodes. 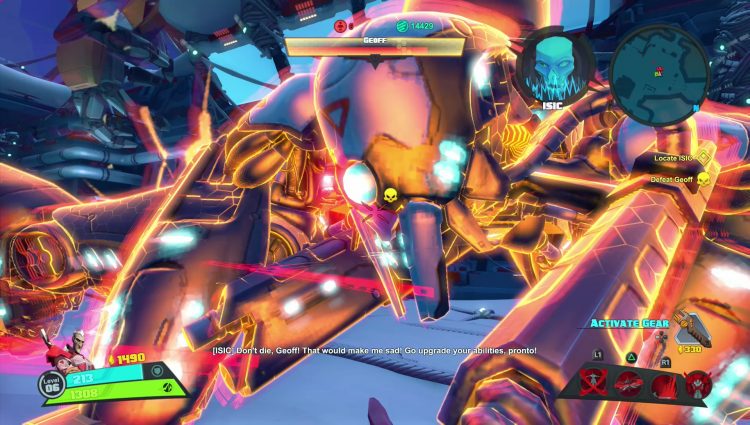 However, there are some missions which are incredibly boring, though not always linear. Some missions force you to defend a position from waves of enemies. After doing so, you must go to a new position and defend that. If the point is destroyed, you fail the mission and must start over. I guess there is some strategy to these episodes, what with shards and buildables playing a big role, but they’re very repetitive. 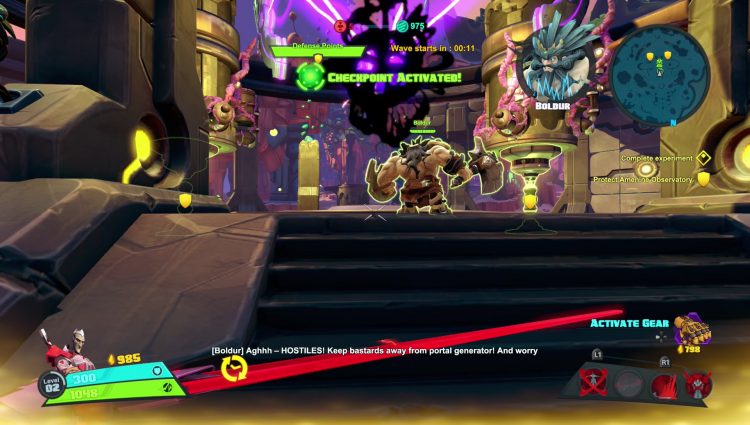 Your Battleborn Hero has a set amount of lives for each episode. More can be obtained throughout the mission unless you play the episode with Hardcore mode enabled. You are only given one life on Hardcore. The overall story mode difficulties include Normal and Advanced.

The story isn’t incredibly heavy or forced onto you. It’s pretty light, interesting, and even comedic. A very short amount of dialogue will be played at the beginning of each mission, some is given at the end of the mission, and some is given throughout the mission alongside the objectives as you make your way through the level. You are given incentive to replay these missions to get a better score or rating on the episode. Bronze, silver, gold, platinum, and possibly others. Again, some Battleborn Hero can be unlocked quickly if you earn certain medals instead of reaching an overall player rank. 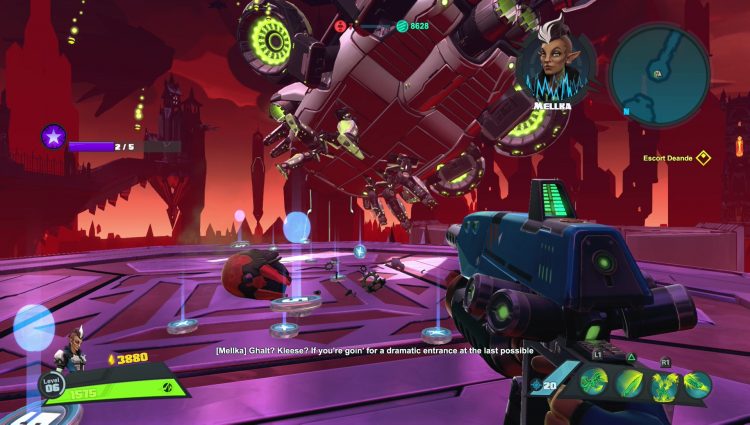 I felt the story mode was a bit too short, and had a few boring missions in its already small amount of episodes. I didn’t really want to replay the levels to earn a better rating, but they were great places to complete challenges for each Battleborn.

The entire game felt like it was lacking. There was very little content, and the content that is there isn’t always the best. It’s almost as if they’re setting this game up for DLC. Yes, the DLC and season pass isn’t as expensive as some other games, but you shouldn’t have to buy extra content to make a complete game. It’s a real shame since the Battleborn Heroes that were created are so awesome, and the idea of helix levels and upgrades is pretty unique and fun. However, I cannot recommend this game at a full $60 price point. About $30 is the only price point I can fully recommend this game to anyone.