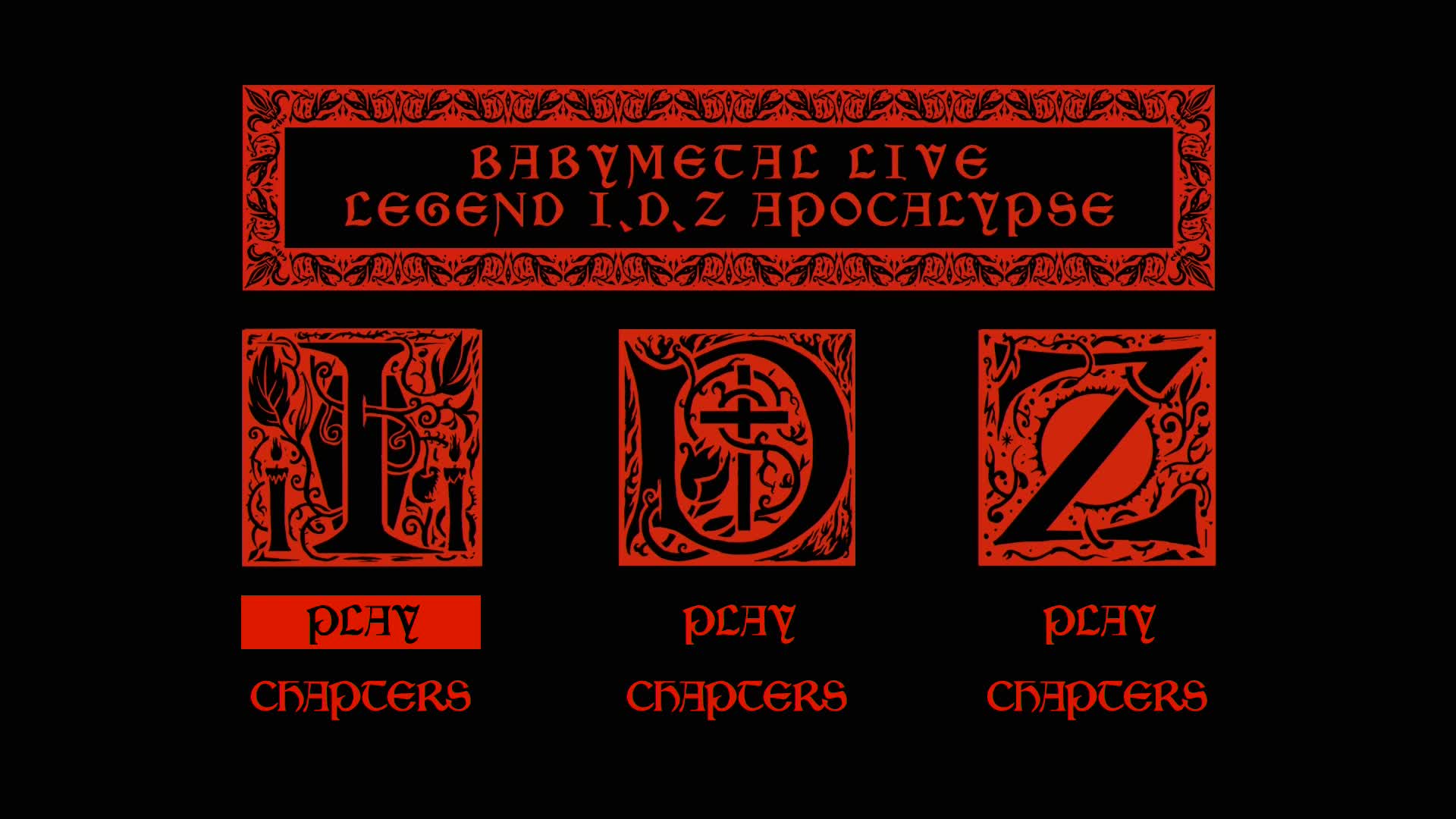 Are you a huge BabyMetal fan but aren’t sure if you should buy BabyMetal Live Legend IDZ Apocalypse? Here’s a quick review complete with video and photos.

Legend IDZ Apocalypse is BabyMetal’s very first live concert blu ray. Since this was from their early years, their performances weren’t very spectacular, and their crowds were much smaller than today. To make up for it, they included three full concerts with a running time of 179 minutes!

Quick Note About the Video Reviews: I made a short video review that’s basically the same as this written review. I originally made a review with clips from the blu ray, but that got hit with a copyright strike. The video at the top of this post has no music what so ever, but it is monetized! The video below does have some clips from the show with music, but I won’t make any money off of that. You could always do me a favor and watch both videos!

First, let’s talk about the more technical specs of the blu ray. The video is set to 1920 x 1080 at 23.976 frames per second. The video codec is MPEG-4 AVC, and the audio is Stereo Linear PCM (48KHz/24bit). I thought it was unusual to have stereo audio for a live concert performance on blu ray, but the video itself is fine. The main menu is laid out very nicely. It separates the three concerts and allows you to skip straight to each song through the chapters menu. 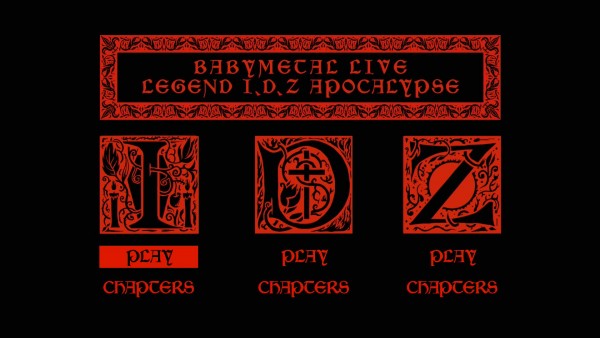 The video quality is clear for the most part, though some times the picture gets a bit blurry. I suppose it depends on the camera, cameraman, and lighting. The majority of cameras have regular lenses, but the one directly at the middle of the stage has a fish-eye lens that slightly distorts the picture.

Legend IDZ Apocalypse has three concerts: Legend I, Legend D SU-METAL SEITANSAI, and Legend Z. These concerts focus on the origin of BabyMetal. Some of the back story is told in between the songs with a narrator and still anime images. Unfortunately, the entire concert and story sections are in Japanese. There are no English options anywhere.

As I said earlier, the performances aren’t as perfect as some of their later concerts, but they are still very energetic and entertaining. The vast majority of their songs (27 out of 32) have backup musicians that don’t really play their instruments. 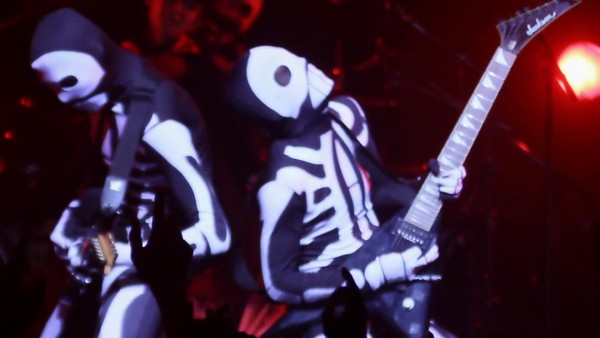 While the skeleton musicians are around, all the music is played over the speakers. It’s a little annoying, and it gets really embarrassing during the sixth song, Akatsuki, on Legend I. There’s a part of the song where two of the guitarists are supposed to dual, but anyone who’s ever played an instrument can tell the skeleton men aren’t playing theirs when they’re front and center! Those in charge don’t make the same mistake twice when Akatsuki comes up again on Legend Z. Instead, they get a body double to battle with Su-Metal in a cool-looking performance. 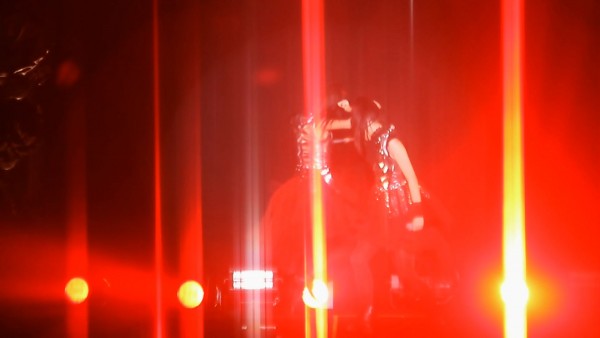 During five of the songs (two during Legend I and three during Legend Z) you will see a REAL band play behind the three girls. They are dressed in white robes and have white and black face paint. They’re known as the Kami Band — Kami being Japanese for God. There are two guitarists, one bassist, and one drummer. It doesn’t seem like these are all the same musicians in later BabyMetal concerts, but they’re not bad. 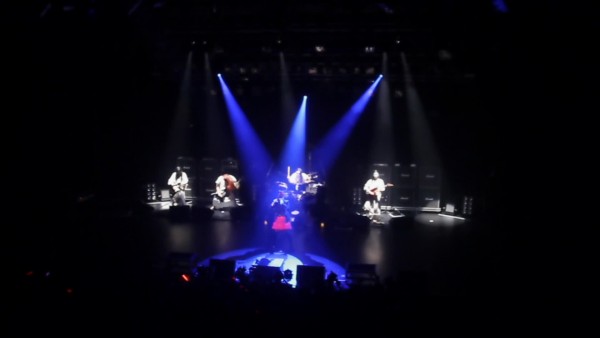 It’s pretty clear that Yui-Metal and Moa-Metal are lip syncing during all three concerts, as well. I can’t be sure but it appears that Su-Metal, the lead singer, is singing for real during every song, but I could be wrong. You can’t really fault them for having the younger singers lip sync since they dance more than sing, and it would be nearly impossible to sing while dancing that energetically.

Some of the songs that appear in Legend IDZ cannot be found anywhere other than this blu ray. Below are all three concerts with a break down of all the songs performed. After the initial set of songs, there’s always an encore performance with a short bit of theatrics and story from the group.

Legend I originally took place on October 6th, 2012 at Shibuya O-East. It was an incredibly small venue. The first seven songs have the skeleton musicians, which means the music is played over the speakers. The songs are:

After the first seven songs is the “Encore.” The crowd does call for an Encore, but the band planned it out before hand. A short animation plays introducing the Kami Band. BabyMetal slowly returns to the stage in a dark spectacle. Su-metal is released from a coffin, while Yui-metal and Moa-metal carry candles to the stage. The Kami Band makes their first appearance, which will send tingles down your spine. Of course, there are still some sound effects during the songs that are played over the speakers. The two songs they play are:

Legend D took place on December 20th, 2012 at Akasaka BLITZ. The venue is a little larger than the last, and the crowd is just as much into BabyMetal’s performance. The song performed include:

The intro song, Babymetal Death, gives a short preview of what’s to come throughout the concert with quick editing flashes. The next two songs were performed in the previous concert. The fourth and fifth songs are completely new, and aren’t available on any other BabyMetal media at this time. The fourth song is “White Love ~Angel of Death version~,” which is only sung by Su-Metal. Honestly, it’s an average song – nothing spectacular about it. The fifth song is “Over The Future ~Rising Force version~,” which start with both Yui-Metal and Moa-Metal. Su-Metal joins them much later in the song. Their choreography isn’t as in sync as their other songs, but the song itself is pretty good.

The sixth song of the concert is a remix of their famous Head Banger (Heado Bangya) song. It’s “Head Banger ~Night of 15 mix~.” This version is more electronica/dance club-like than metal. It seemed to confuse the crowd a bit at first, but they sort of got into it as it went on. BabyMetal is joined by a few new, older back up dancers for this song.

The rest of the songs before the encore have been performed in the previous concert. There’s a short break before the Encore begins. Unfortunately, this time the Kami Band doesn’t come out with BabyMetal. The group slowly walk to the stage to perform the metal version of Head Banger. The final song is another brand new song that can’t be found anywhere in BabyMetal media. It’s called “Tsubasa wo Kudasai.” It’s a slow farewell song to close the show with. Su-Metal stands in front of a cross while flames shoot up.

Honestly, this was the worst concert of the three. There’s no live band at all, and the majority of shots are unfocused. The only thing that makes up for it are the three new songs.

Legend Z took place on January 2, 2013 at Zepp Tokyo. The venue is bigger and seems more active than the last. There are even people rolling around the top of the crowd. Unlike the last two concerts, this show starts with Ijime, Dame, Zettai instead of Babymetal Death. Unfortunately, they still have the skeleton band “playing” behind the girls. The songs that are performed in this concert include:

Song five is Akatsuki. If you remember, they put the fake guitarists front and center during the guitar duel in Legend I. However, in this concert, they have a fake Su-Metal battle the real Su-Metal in a flashy performance.

Song seven is Catch Me If You Can. This is a great song that can be found on the BabyMetal album, but this is the first time it’s performed on this blu ray.

After Uki Uki Midnight, here’s a short break before the Encore. An animation plays which introduces the Kami Band. Like the other concerts, the same organ music and rain sound effect plays as BabyMetal slowly returns to stage. This time, they have the Kami Band to back them up as they perform Head Banger.

Another short break takes place right after the song. BabyMetal returns to stage in new costumes to finish the concert with Babymetal Death and Ijime, Dame, Zettai. Yes, they end the show with the same song they opened up with, but this time they have the Kami Band and some pyrotechnics.

It’s really nice to see the early years of BabyMetal, and a few of the songs that can’t be found anywhere else aren’t too bad. Hopefully they’ll wind up on a second album in the future. For the price, I can’t really recommend this blu ray unless you’re a hardcore BabyMetal fan. The live band is great, but they’re only there for three different songs, five performances in total. I was also expecting much more than stereo linear PCM! If you do choose to buy it, you can get it off of Amazon right now!