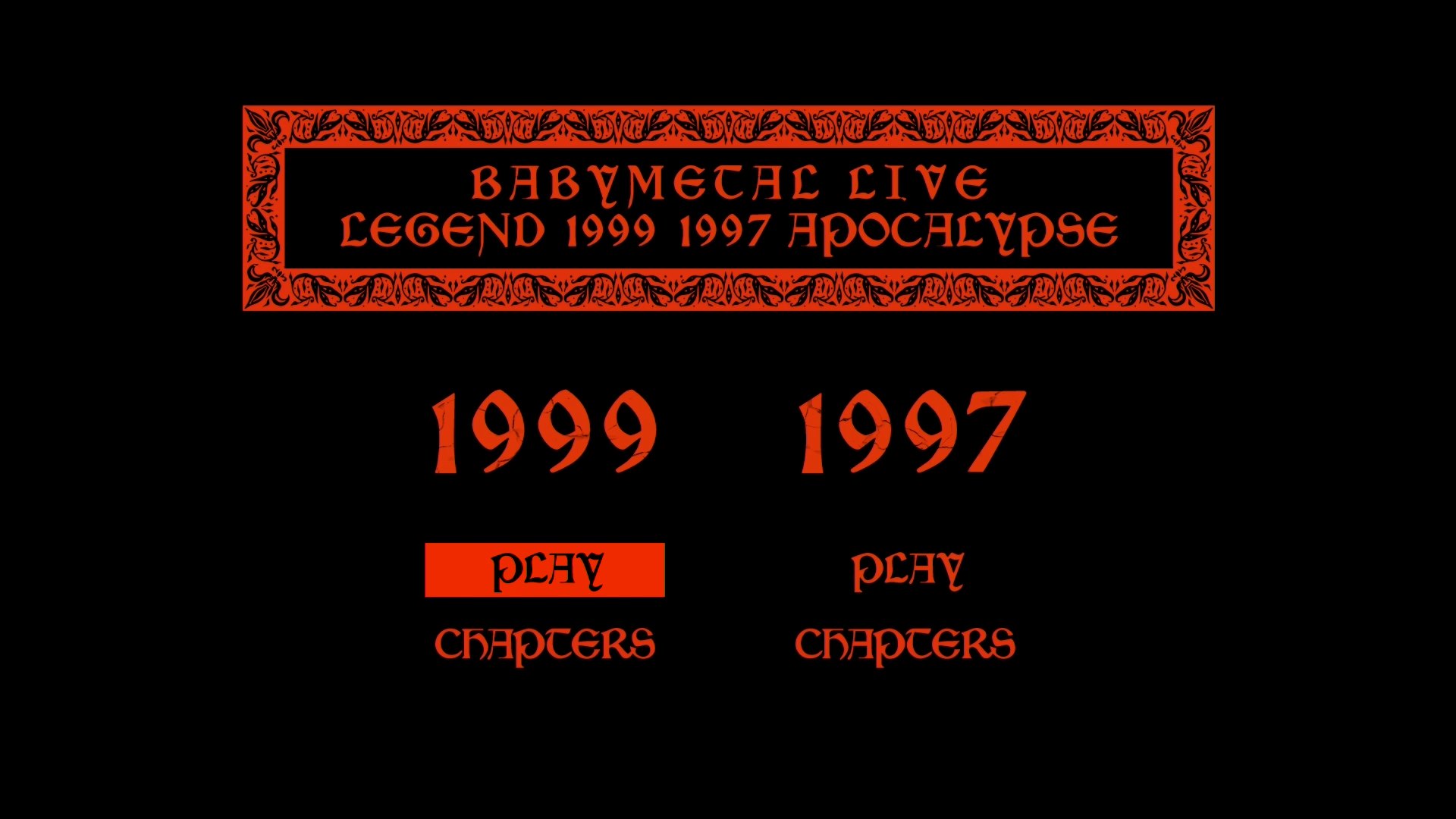 Need a BabyMetal Live Legend 1999 1997 Apocalypse Review? I give a full break down and compare it to their first live concert blu ray.

Legend 1999 1997 Apocalypse is BabyMetal’s second live concert blu ray. These concerts took place in mid and late 2013, which was around the time they started gathering a large fan base.

This blu ray consists of two full concerts with a total running time of 157 minutes. The technical specs are the same as their last blu ray. The video is set to 1920 x 1080 at 23.98 frames per second. The video codec is MPEG-4 AVC, and the audio is Stereo Linear PCM (48KHz/24bit). I was really hoping for better audio quality again, but it seems we’re stuck with two channel audio.

The main menu is laid out very nicely. You can choose to play either concert from the beginning, or you can select a song title and instantly jump to that part of the concert from the chapters menu.

BabyMetal’s performances are much better than Legend I, D, Z Apocalypse, but there are a few drawbacks. Unfortunately, only half of each concert has the live band, who are called the Kami Band. The other half has the skeleton band who don’t really play their instruments. Furthermore, only Su-Metal is singing in both concerts. YuiMetal and MoaMetal lip sync, but you can sort of forgive them for that since they are the main dancers.

Like their last concert performances, Legend 1999 and 1997 feature short animated images with a narrator telling the story of BabyMetal. Unfortunately, there aren’t any English options anywhere, so if you don’t know Japanese, you’ll miss out on the story.

The First concert is LEGEND “1999” YUIMETAL & MOAMETAL SEITNSAI. It originally took place on June 30, 2013 at NHK Hall. This concert focuses on the two younger performers of BabyMetal, YuiMetal and MoaMetal. They’re usually the main dancers of the group with little to sing about, but in this concert they’re given their own songs to sing solo. Of course, they’re just lip syncing instead of actually singing. These new songs cannot be found anywhere else in BabyMetal’s media at this time, but they’re only covers of existing songs from other Japanese groups.

The concert starts out with a short opening animation before jumping to the live concert. The concert hall is a decent size, not massive, but definitely not small. The skeleton band “plays” behind the girls during the first seven songs.

The fifth and sixth songs are YuiMetal’s and MoaMetal’s new songs, Chokotto Love (Big Time Changes Ver.) and Love Machine (From Hell With Love Ver.) respectively. Both songs are covers from other Japanese groups. Personally, I like the music in YuiMetal’s song, but I don’t like the lyrics and performance all that much. At the same time, I like the lyrics and performance of MoaMetal’s song, but I don’t like the music all that much. It seems too pop-ish.

The two girls sing the next song together, Onedari Daisakusen, which was performed in the last blu ray, and is available on their album.

The song after Black BabyMetal’s performance is called No Rain, No Rainbow. This song cannot be found on any BabyMetal CDs at this time, and it’s without a doubt my favorite BabyMetal song. It’s a lovely metal ballad performed by Su-Metal and the Kami Band. MoaMetal and YuiMetal pretend to play the piano on stage, but they’re really just pantomiming.

The Kami Band plays with BabyMetal for the rest of the concert, which means this is the first time many songs have been played with the live band! They play through Catch Me If You Can and Doki Doki Morning before arriving on a brand new song, Megitsune. This song can be found as a single and in their first album, but this is the first time they’re performing it in any of their live concerts on Blu Ray. After Megitsune, they play Ijime, Dame, Zettai.

The group takes a short break before the encore performance. A short animation plays before they take the stage again. The first song the group performs is Akatsuki. If you remember from the Legend I, D, Z Apocalypse review, I mentioned how the skeleton band pretended to duel on guitars at the front of the stage, but it was obvious they weren’t playing. During the next performance, they had Su-Metal battle a doppelganger instead of going through the fake guitar duel. This time, half of the Kami Band takes center stage to show everyone a real guitar duel.

The final song of the concert is Head Banger. That song has been played many times before, so it’s nothing new.

At the end of Head Banger, a sweet sounding song plays while fog floods the stage. The three girls ascend up a set of stairs into a bright light.

The second concert is LEGEND “1997” SU-METAL SEITANSAI. It originally took place on December 21, 2013 at Makuhari Messe Event Hall. This concert focuses on the lead singer of BabyMetal, Su-Metal. She has a band new solo song that debuted in this concert, but unfortunately it’s just a cover of an existing song.

The concert hall this time around is massive. It looks like the ground floor could fit a football field. The crowd is very lively and active throughout the concert. The cameras even shift to the crowd as they mosh. The quality of the cameras are much better than Legend 1999. The shots are more clear and focused, and the reds don’t drown out all other colors on the stage.

The concert starts with the same music from the end of Legend 1999. After a lengthy introduction, the group walks to the stage to perform. The skeleton band “plays” behind the girls for the first nine songs of the concert.

The first three songs have been performed in previous concerts. The fourth song is Su-Metal’s new solo, which is really a cover from Yoko Takahashi. Regardless, it’s still a great song.

The sixth song is Gimme Choco. This song is available on their album, but this is the first time it’s been performed on blu ray. Those with a sharp eye might notice this was the exact performance that was used in the official music video for Gimme Choco.

The next three songs have all been performed in previous concerts. There’s a short break after the ninth song — Ijime, Dame, Zettai — along with a small video package introducing the Kami Band. The short video has a bit of a Christmas theme to it, since this concert took place just four days before Christmas.

YuiMetal and MoaMetal return to the stage to perform “Onedari Daisakusen” in cute Christmas outfits. They must be pretty hot since they just sweated through nine performances!

The 13th song is an alternate version of Akatsuki. Instead of being metal, the only instruments are string instruments and a piano. Su-Metal sings it beautifully.

The 14th and final song is BABYMETAL DEATH. You may have noticed the giant virgin Mary sculpture in the background, and the slight Christmas theme during one of the songs. Well, what better way to celebrate the birth of Jesus than with a crucifixion! Yes, at the end of the concert, the group crucifies Su-Metal. I’m not too sure if this would go over well in the US, or any other countries with high Christian/Catholic populations, but it was still a pretty awesome sight to see. I thought it was great, but I feel I should warn those who get sensitive over it. At the very end, the Mary statue explodes and falls apart.

Legend 1999 and 1997 are a step up from Legend I, D, Z. The price of the blu ray is still high, so I can’t recommend it to just anyone, but I can recommend it to more than just hardcore BabyMetal fans. There are some terrific songs, the Kami Band is there for half of each concert performance, and the crowds are very active. If you do want to buy it, you can grab it off of the Amazon links below.