Before jumping into the review of the two concerts I figured I’d give some tech specs for the Blu Ray. Both concerts are at 1920 x 1080p and 23.98 frames per second. Although it’s listed as 16:9 aspect ratio and 1080p, there are actually small black bars at the top and bottom of the screen. Like usual, the audio is Stereo Linear PCM 48 KHz/24bit. 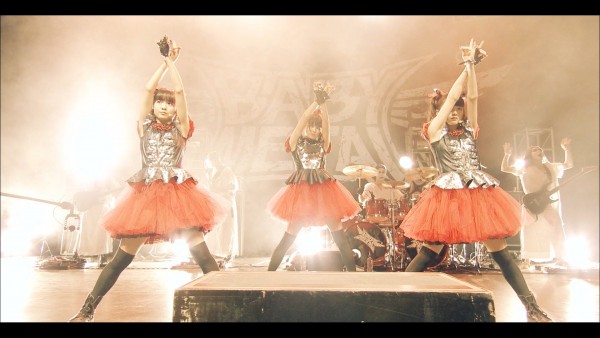 Both concerts come on a single Blu Ray disc. There are no special features, but you can select English or Japanese options at the main menu. You can also skip to a song from the Chapters menu at the main menu or by clicking the pop-up menu while a concert is playing.

The first concert took place at The Forum on July 7th, 2014. It lasted around one hour and fifteen minutes long. The stage is incredibly small when compared to the other venues they played at in Japan leading up to the World Tour. Given BABYMETAL’s energetic dance routines, things had to be toned down a little. 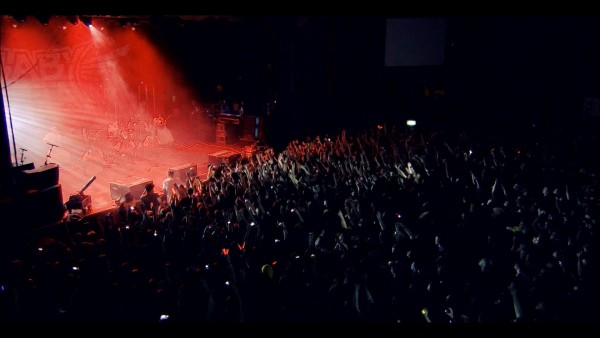 When it comes to pyrotechnics, there were none. The only thing that was available were smoke cannons (fire extinguishers pretty much) and confetti cannons.

The camera quality was pretty decent. The picture quality was a little grainy, but some may not notice it all that much.

All three girls are singing throughout the concert, but it seems there are a few background vocals during some songs. When it comes to the band, the Kami Band is there for all thirteen songs. The members are a little mixed from the last Blu Ray. The bassist and drummer are the same, but the guitarists seem to have been switched. I know I’ve seen one of the guitarists in the Legend 1997 concert, but I’m not too sure about the other. He may have been at Budokan, but it was tough to see his face with that wig.

A few new songs have new intros that play over the speakers. An example is Akatsuki. At the beginning of the song, there’s a lengthy piano and violin section. Also, at the beginning of Ijime, Dame, Zettai, SU-METAL actually says the intro in English instead of Japanese. She always says this lengthy intro that’s related to the song, but this is the first time she’s said it in English. Obviously, she’s not a native English speaker, so she has a really thick accent.

The crowd was very much intro the concert. They were tons of moshing and crowd surfing going on. BABYMETAL even did some sing-a-long participation during Gimme Chocolate. SU-METAL would sing “Check It Out Chocoreto Chocoreto Cho Cho Cho,” and have them repeat after her.

All in all, it was a pretty good concert in terms of music and the crowd, but the extras that I’ve grown accustomed to such as the big stage, crazy lighting, pyrotechnics, etc was very lacking.

The second concert took place at 02 Academy Brixton on November 8th, 2014.  It lasted around one hour and thirty minutes long. Just like the Forum, 02 Academy Brixton’s stage was pretty small. The upside: There was much better lighting effects and pyrotechnics.The massive downside: the picture quality was terrible. I don’t know what happened, but the camera used during this concert gave an incredibly pixelated picture. I’m not sure if they accidentally shot it at a lower resolution and had to upscale or what. 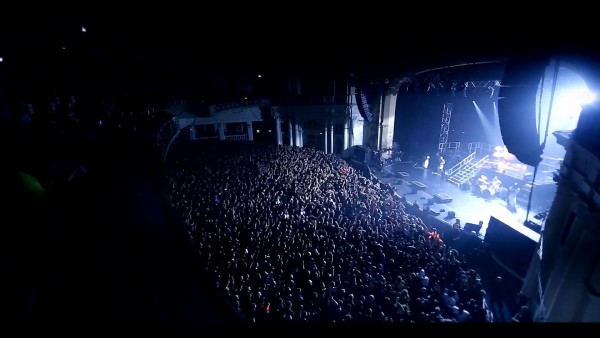 The song lineup was almost exactly the same as the first concert. The only difference was they switched Onedari Daisakusen and Song 4 with each other. A few Kami Band members were switched out too, which gave a different sound during the freestyle at the beginning of Catch Me If You Can and Mischief of Metal Gods. One of the guitarists was switched with a guitarist that was at Budokan live, the other guitarist was now definitely the same guitarist from Budokan live (I wasn’t sure if this was him during the first concert), and the drummer was completely new. This was the first time I’ve seen the drummer on any of the BABYMETAL live concert Blu Rays, and he was damn good.

In addition to the song switch, one new song was added. That song was “Road of Resistance,” which is the newest BABYMETAL song co-written by the guitarists from Dragonforce. Just like with Gimme Chocolate, BABYMETAL did a little sing-a-long with the crowd during Road of Resistance. Side note: The Gimme Chocolate performance during this concert was actually added as a bonus track to the re-release of the BABYMETAL album.

When compared to the first concert, the second was much better, but the picture quality bugged me throughout the show.

BABYMETAL Live in London is a pretty good Blu Ray, but it has some major downfalls. If you had to choose one BABYMETAL Blu Ray, I’d recommend Live at Budokan over the others. Live in London may be tied with BABYMETAL Live 1999 1997 Apocalypse. It’s tied because 1999 and 1997 had a ton of songs you couldn’t hear anywhere else, the stage for 1997 was huge, and the performances were spectacular. The downside was the lack of the Kami Band. The Kami Band was there, but only for a handful of songs. On the other hand, Live in London had the Kami Band throughout both concerts from start to finish, and you get Road of Resistance. If you’d like to buy the Live in London Blu Ray or DVD, you can get it at Amazon in the link below!