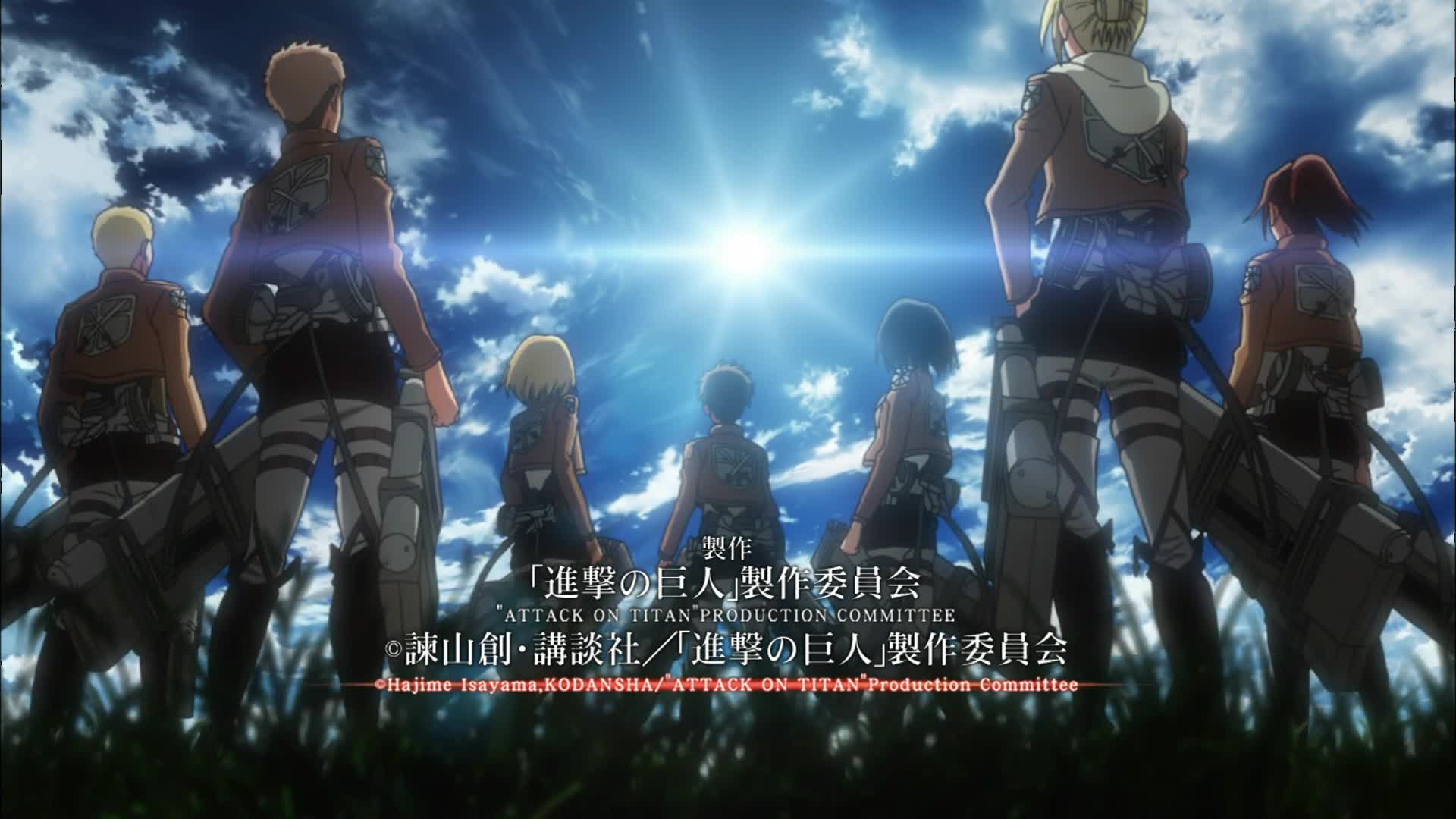 This anime has been getting a lot of praise, but does it live up to the hype? Here’s my Attack on Titan season 1 review.

The first season of the Attack on Titan anime originally released back in Spring of 2013. Since then it has gathered a large fan base that praise the anime to no end. However, like with all popular franchises, some people start to question if the series is actually as good as people say it is. So I binged watched the entire series over three days to judge for myself.

Attack on Titan seems to be set in a futuristic / alternate universe Earth where all of humankind lives within three giant walls. Between each set of walls are various towns, expansive land, and natural resources. Outside the walls are large creatures known as Titans. Titans appear to be human, but don’t have the same intelligence — among other differences. The only urge Titans have is to eat all of humanity. 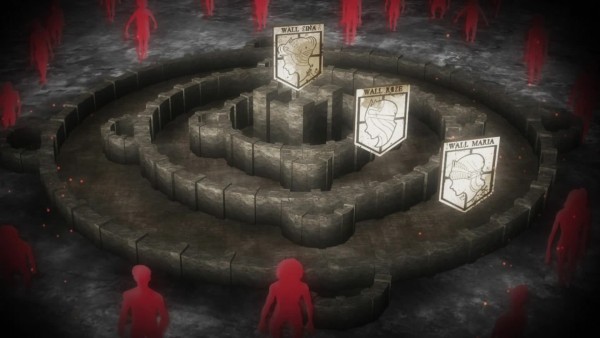 The story follows three main characters: Eren, Mikasa, and Armin. After a series of unfortunate events, these three decide to join the military ranks to take the Titans head on.

Three branches are employed by the government to deal with Titans in some fashion. The Survey Corps go beyond the walls to gather info on Titans, the Garrison Regiment guards the walls and people, and the Military Police Brigade guards the royal family.

The Setting and World

Humankind is still very much in the dark about the happenings outside the walls, including the giant beasts known as Titans. This is an interesting approach that has been seen in a few other movies and TV shows, but not quite to this extent. For example, in Harry Potter you see the magical world through the eyes of a boy who is just beginning to explore it, but all the information is there in books or with a little help from Harry’s friend. In Attack on Titan, nobody knows anything about what’s beyond the walls, and humanity struggle to survive if they step one foot outside the third wall. 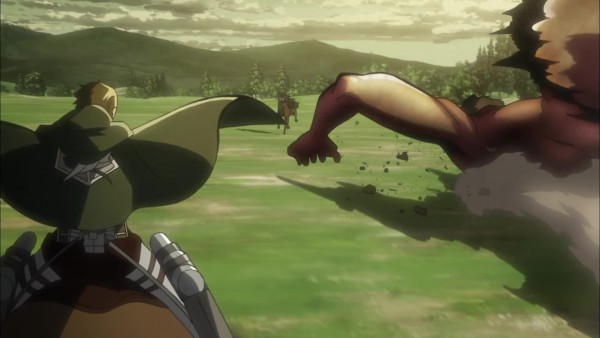 To be honest, I didn’t think the Titans in this series were scary in the least bit, even though many of the characters were frightened at the mere sight of one. They were big, stupid, and often goofy looking. That quickly changed a few episodes in when you see the absolute carnage and destruction they create. 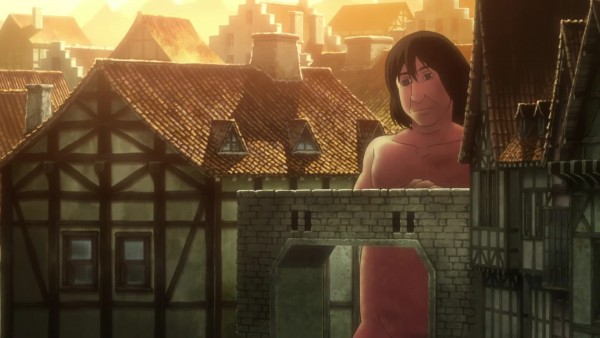 The story may be lacking a tiny bit, but the action is there in full force. The choreography in this anime is outstanding to say the least. Each member of the three military branches is equipped with swords (with detachable blades) and a device called the 3D Maneuver Gear. This device launches grappling hooks from the belt using compressed gas. These are used to traverse the area and get high enough to take down a Titan. One of the few things they do know is how to kill a Titan, which is by slicing deep enough at the back of their necks.

You can either love or hate the art style of this anime. There are incredibly thick lines on each character and many moving objects, but there is so much detail in the surrounding world. It becomes a little distracting during close ups, but larger shots aren’t so bad. The thing I hate the most in anime art styles is when there’s a switch between normal drawings and fully computer generated images. You may see these from time to time in Attack on Titan, like a bell in a watchtower will be CGI when everything else is drawn. 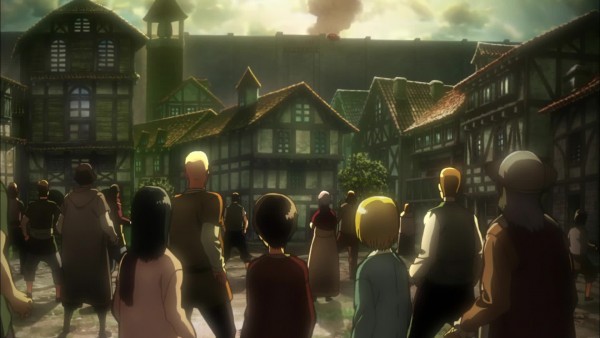 When it comes to the music, you probably won’t even notice it all that much. This isn’t the type of anime that relies heavily on music to set a mood, but the music is a nice addition to the action sequences. It doesn’t seem out of place or overbearing in the least bit.

I watched Attack on Titan in Japanese, so I can’t speak out on the English voice actors.

The Japanese voice actors are terrific. This is primarily a serious anime, so you won’t find many unusual or annoying voices like some other anime. That’s not to say there isn’t an unusual or annoying character here or there. The emotions and acting are on point. When a character is angry, you feel their anger; when they’re sad, you feel their pain. It’s hard to believe anyone would not get immersed into the world of Attack on Titan when listening to these actors.

There are a total of 25 episodes in the first season of Attack on Titan. The majority of episodes continue right where the last one left, allowing a much larger story to be told over a series of episodes. Additionally, some episodes feature flashbacks to build on each character’s personality.

The story picks up on the day the very first wall is breached. This is the first time a Titan has breached the walls in 100 years. The three main characters escape behind the second wall, but the first wall is lost for years to come. The story then fast forwards a few years to the three main characters in military training. Eren is set on joining the Survey Corps and killing all the Titans, while Mikasa decides to go wherever Eren will go. Armin is there as well, but his reasons don’t seem as clear as the other two.

One of the best things I love about this anime is how there isn’t just one character that’s better than all the rest. Eren has the best resolve, Mikasa is the best fighter, and Armin is the smartest and most strategic.

Although there are three main characters in this series, a large number of additional characters are introduced and given a small spotlight. Many of these characters are then killed off a short time later, some times even in the blink of an eye, giving you a real sense of fear when anyone goes head on with a Titan. 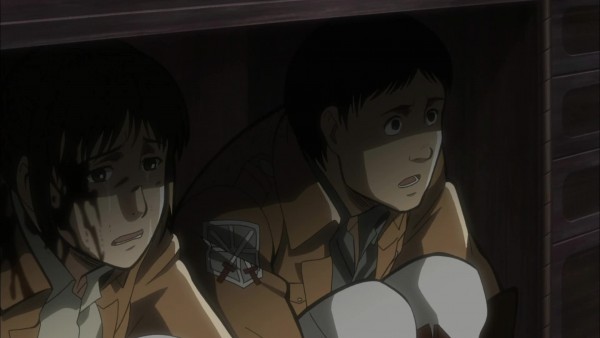 After a number of strategic battles that extend over many episodes, you begin to understand and love or hate each character. Much information is gathered by humanity when compared to the years before the first wall fell, but there’s still so much that still needs to be discovered. It’s a great leap into a brand new world we can all grow and learn in.

Attack on Titan is an anime for those who love constant action and a bit of gore. The story is solid enough to keep many interested, but it’s still rather thin at this point. That’s not to say the lack of story is bad – in fact, it’s nice to learn so much with the characters. So many questions are left unanswered, and a clear goal is set for the second season.

With all that being said, I recommend watching it and possibly even buying it; although, some people may find this type of anime to be good for a single view instead of repeat viewings. If anything, watch the show once anywhere you can, and if you love it enough you can buy the DVDs or Blu Rays.