This Attack on Titan Eren Yeager Figma 207 is packed with items you would expect from the Survey Corps. Here’s a thorough review and unboxing.

The Eren Yeager (also spelled Eren Jaeger) Figma by Max Factory comes bundles with a number of small parts to position this figure in many awesome poses.

It stands at 13.5cm tall, and is colored very nicely for a Figma. The joints for this Figma are found at the neck, the shoulders, the elbows, the wrists, the ribs, the leg-hip joints, the knees, the ankles, and the toes. Holes can be found at the top of his back, the bottom of his back, on his hips, and on both sides of his thighs.

The 3D maneuver gear connects to the figure at the thighs, the hips, and bottom of the back. It can then connect to the base of the swords, which can be placed within one of the types of hands. As mentioned above, two types of compressed air connect with the gear to make it look like grappling hooks are shooting out of the front and air is coming out the back while propelling Eren forward.

This figure also comes with a small bundle of string and a hook with more string. This is used to connect with the 3D maneuver gear and hang the figure into the air.

If you do want to connect the figure to the base arm, it’s best to connect the arm to the top of his back instead of the bottom since that’s where the 3D maneuver gear connects. Be careful when you’re connecting the cloak and base arm together. The paint on the back of the figure seems to rub off really easily. 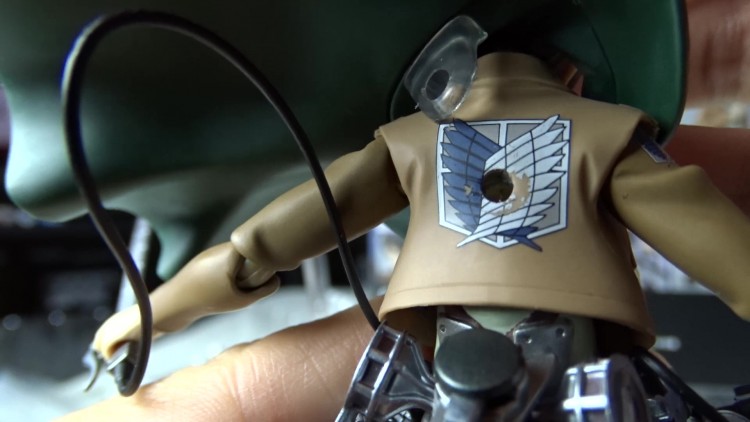 And that’s everything that comes with the Attack on Titan Eren Yeager Figma. This action figure has a massive amount of options and looks great. The only downside is the paint seemed to rub off on the back when I connected the cloak. Take a better look in the video at the top of this post.

If you’d like to buy one yourself, grab it off of Amazon using my link below. If you use my link, I’ll get a small kickback to help power my website and YouTube channels. Don’t worry, it won’t cost you anything extra!