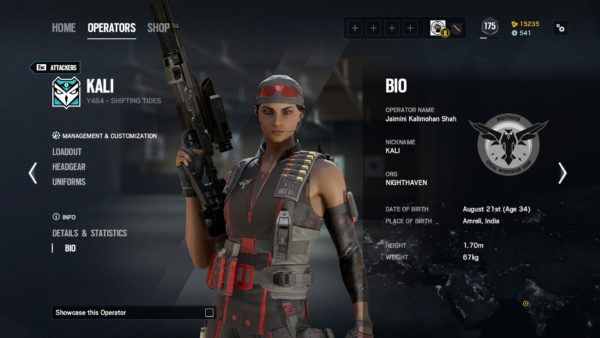 Kali’s sniper rifle is an incredibly powerful weapon that can kills or down in a single shot. It also destroys barricades and penetrates soft walls with ease. Attached to the rifle is a variable zoom scope with 5x and 12x options. The scope must be used to really land shots. Even if you are standing directly in front of your opponent, firing from the hip doesn’t guarantee a direct shot with this rifle.

Although the weapon is powerful, it is far from discreet. All shots from the CSRX 300 will leave a smoke trail back to Kali, giving off her location in addition to the sound of the rifle.

A shot to the head with the CSRX 300 will instantly kill any Operator, and the rifle has enough penetrating power to kill up to five Operators with a single bullet.

A shot to the chest will put an Operator in a down but not out state. The downed Operator will instantly spin towards Kali’s location, providing intel for their team.

Kali’s unique ability is an under-barrel launcher called the LV Explosive Lance. This gadget launches explosive rounds that burrow into a surface and explode a second after. The explosion will come out both sides of breakable and reinforced walls. The LV explosive lance can destroy a number of gadgets if they are near the explosion or hit directly:

The explosive rounds will create a small hole in breakable walls, but reinforced walls will remain intact. If shot at a completely unbreakable wall somewhere on the map, the explosion will only come out the tail end. Luckily, the explosion doesn’t damage Operators.

The explosive Lance rounds can be destroyed before they explode if the tail end is shot. These gadgets can also be grabbed by Jager’s active defense systems and Wamai’s mag-net systems. Three Lance explosive shots will be available each round.