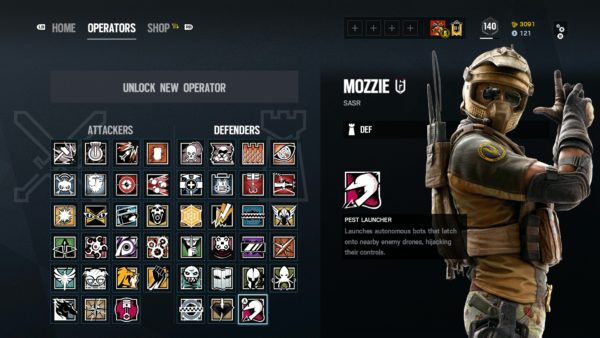 Although Mozzie has three Pests, he can only control two Drones at a time. Keep at least one pest on you and place the other two near the objective room to snatch or ward any drone coming in.

It’s best to take over at least one drone right away to use as a mobile camera. Place it somewhere around the map or hunt down enemy Operators, forcing them out of their hiding spots. The primary target for Mozzie should always be Twitch’s shock drone. The shock drone can be used to destroy enemy gadgets, and are much quieter than normal drones. It’s also eliminating another Operator’s unique ability.

Mozzie’s unique ability is a special gadget called the Pest Launcher. This single shot launcher fires autonomous bots called Pests that latch onto nearby enemy drones. A high-pitched sound and a red triangular warning logo will appear on the drone’s screen, notifying enemy Operators of any nearby Pests.

They can be set as traps or fired directly at a drone to instantly take it over. The best drones to take over are Twitch’s shock drones, as they can destroy enemy gadgets and deal minor damage to enemies themselves. They are also quieter than normal drones and don’t have a blinking light.

Once a drone is taken over, Mozzie can control them with his smartphone until the drone is destroyed. Hacked drones can be destroyed by enemy gadgets and firearms from both sides, but will not be harmed by friendly gadgets, with the exception of electric gadgets from Bandit and Kaid.

Mozzie will see a video feed in color when controlling drones, but friendly Operators will only see black and white. Three Pests are available per round. Mozzie’s hacked drones blink yellow for friendlies, blue for enemies, and white for Vigil and Nokk.