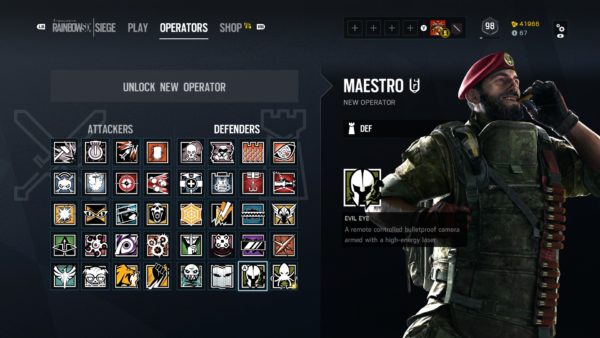 Maestro is a defensive tech Operator. His heavy-duty weapons can cause massive damage, though they aren’t the most accurate.

The Evil Eye gadget is best used as an intel gathering device. Using the offensive laser barely causes damage to enemies, and it will make the gadget vulnerable to enemy attack. Only use the laser if the enemy is unaware of the Evil Eye’s position, an enemy is downed, or if your team could use a distraction to get a jump on the enemy team.

Maestro’s unique ability is the Evil Eye, a heavy-duty camera armed with a high-energy laser. This camera can be viewed by the entire team like the bulletproof camera, but can only be moved and activated by Maestro. Once killed in action, even Maestro will not be able to move the camera.

The camera on the Evil Eye can rotate 180 degrees and see through smoke using its IR capabilities. Two gadgets are available per round. The Evil Eye will blink yellow for friendlies, blue for enemies, and white for Vigil and Nokk.

The evil eye will automatically be in the defensive position where a bulletproof shield protects the camera from firearms and explosives. The shell will protect it from being instantly destroyed by Thatcher’s EMPs and Twitch’s shock drone tazer, but it will become disabled for a short time and open its bulletproof shield halfway. 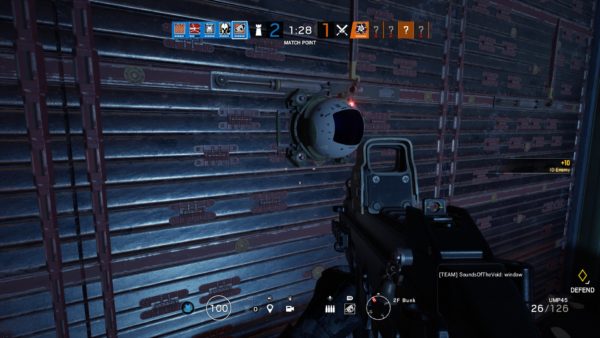 Switch to attack mode by opening the bulletproof glass, making the laser operational. The laser only causes 5 HP damage per hit, cannot pierce through surfaces, and can overheat after 25 consecutive shots. Furthermore, being in attack mode will leave the evil eye vulnerable to any damage from firearms and Twitch’s shock drone.