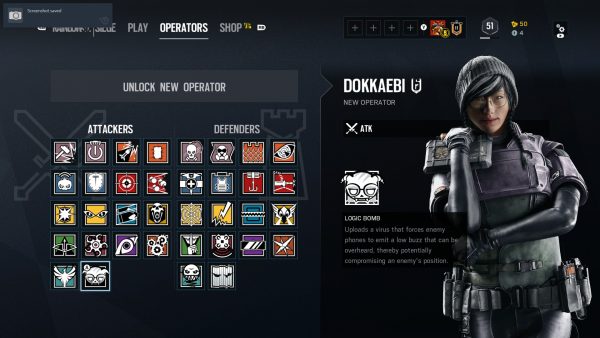 Dokkaebi is a tech-based attacker. Use the Logic Bomb to stop enemies from looking at cameras while notifying your team of their positions with a buzzing noise from their smartphone. Hack into a dropped phone from a killed enemy to allow the entire team to use the defending team’s security cameras.

Her primary weapons allow her to go long range, so it’s best to stick next to an Operator who is suited for close range combat. Although she has a shotgun, it fires slugs that can instantly kill an enemy or damage them at any range. Her shotgun can only hold two rounds at a time, however.

Dokkaebi’s unique ability is the Logic Bomb. This uploads a virus that forces enemy phones to emit a low buzz that can be overheard, thereby potentially compromising an enemy Operator’s position.

The phone call will last a max of 8 seconds unless the Operators manually resets his phone. Operators within range of a Mute jammer will also automatically end Dokkaebi calls. This ability can be used twice per round.

In addition to uploading a virus, Dokkaebi can hack into dropped Operator’s phones to gain access to all security cameras for the entire team. A phone will automatically drop when an Operator is killed. The enemy team can prevent a phone from being hacked by shooting and destroyed said phone.