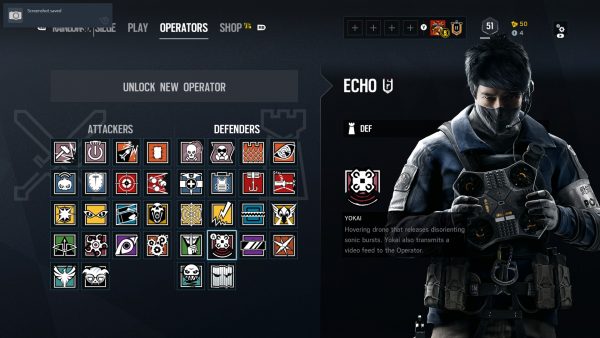 Echo can use his Yokai drone to scout out enemy Operators. Scanning and identifying an Operator will notify them, however, which might cause them to look for the drone. You can simply relay their location to the rest of the team, or send out sonic bursts to debilitate enemies for your teammates.

Be very careful when facing Twitch’s shock drones or Thatcher’s EMPs as they can take out a Yokai with little trouble. Same goes for any breach charges or explosives.

Echo’s unique ability is the Yokai, a remote controlled, cloaked drone with debilitating sonic bursts. This hovering drone is nearly invisible to the human eye when anchored to ceilings, and will transmit a video feed to Echo and the rest of his team.

Stick the Yokai to the ceiling to prepare the drone for sonic bursts. These bursts will disorient the Operator beneath (friendly or enemy) by reducing their vision and hearing. This visual and audio debilitation will worsen and last as long as the Operator is moving. An inflicted Operator must remain still for a few seconds to fully recover. The base disorientation time is 7 seconds.

Sonic bursts from the Yokai prevent Operators from planting a defuser in the Bomb game mode. The bursts will also force Montagne to drop his Extendable Shield for a moment.

The two Yokai will not share sonic bursts between each other. Each drone can store up to two bursts at a time. After firing at an enemy with the Yokai, a meter on the bottom-right side of the screen will take 20 seconds to fill and charge another sonic burst.

Two Yokai are available per round. Yokai can be destroyed by firearms, explosives, and Twitch’s shock drone. Thatcher’s EMP grenades will only disable the drone for a few seconds.