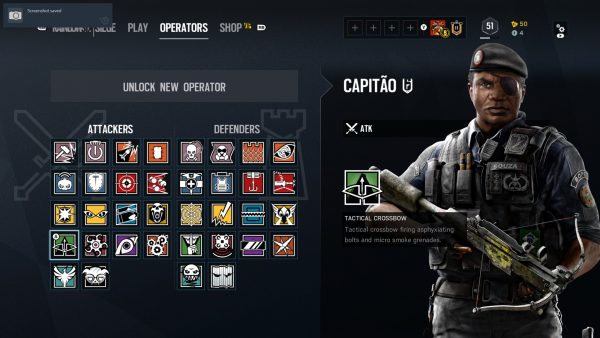 Capitao is a unique attack Operator that uses a crossbow to debilitate the enemy team. If you believe an enemy is hiding in a corner, fire a bolt to push them out. The great thing about the crossbow is the bolts can fly through a single bullet hole in the wall. If there is a non-reinforced wall, shoot at it with your primary weapon, then switch to your crossbow and shoot a dart through the same hole.

Smoke grenades will reduce all visibility and provide cover for the team, unless met with Warden’s glasses. His primary weapons are lethal and accurate if vertical grips and compensators are used to reduce recoil.

Capitão’s unique ability is the tactical crossbow. This crossbow fires incendiary bolts that cause 12 damage per second, and micro smoke grenades that provide cover. Two of each bolts are available per round.

Press the ability button to bring up the crossbow, and then press UP on the D-PAD to switch bolts. A small picture on the back of the bolts, and the color of the bolts themselves, help identify the different effects. Blue is smoke, orange is incendiary darts. Both the smoke and the fire will last for about 8 seconds after being deployed.

The incendiary grenades will not only damage enemy combatants, but also friendly Operators. They will not destroy gadgets, however.