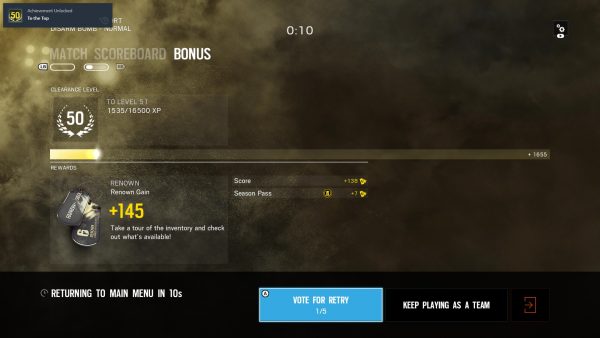 Unlike most multiplayer shooters out there, Rainbow Six Siege does not focus on experience points, levels, or ranks. Players will earn XP by completing Multiplayer games and Terrorist Hunt matches.

Players below Clearance Level 50 will have access to the custom Newcomers Multiplayer playlist, allowing newbies to get a feel for the game with other new players. Once a player reaches Clearance Level 30, Ranked and Unranked Multiplayer will become available.

Additionally, two achievements and trophies are earned for reaching Clearance Levels 25 and 50. A total of 16,000 XP is required to reach Level 50. If you need help earning some extra experience points, simply complete as many bonus objective as possible throughout the game and do not shoot your teammates! The average game of Terrorist Hunt or Multiplayer will earn a common player about 2000 XP.