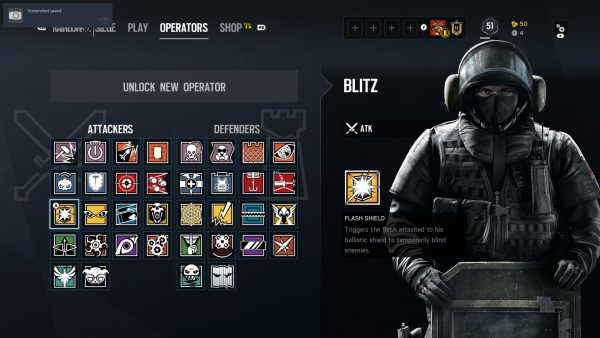 Blitz is a beefy attack Operator. Although he’s on the offense, his shield helps him move defensively forward rather quickly. If you come across enemies as you push towards the objective, flash them with the lights attached to the shield.

Most enemy Operators are accustom to being flashed and shot, so they often shoot directly after being blinded. Pause a second after blinding an Operator before switching to your secondary and shooting or you might be shot in the head before you get a chance to attack. Alternatively, you can continue rushing up to them and attack with an instant kill melee attack.

Blitz’s unique ability is a specialized ballistic shield. With a press of a button, the flash bulbs mounted to the front of the shield will temporarily blind any Operator on the other end. The flash shield can be used 4 times per round, and has a 7 second cool down between flashes.

Other than the flash, the shield is a normal ballistic shield. In Siege, shields can withstand all firearm damage and reduce explosive damage. It is important to remain crouched because your legs will be exposed, but there are other weak points that can be targeted by a marksman. When switching to your secondary, the shield will be placed on your back, offering protection from the rear.

A handgun can be fired while behind the shield, but only from the hip with terrible aim. When aiming the firearm, the shield will be tilted diagonally and only protect the midsection. Moreover, using a secondary weapon while the shield is out in front will prevent the gun from auto-reloading.

Blitz also has the unique ability to run while keeping the shield facing forward. No other shield-bearing Operators can do this. Weapons cannot be used while sprinting, but a quick melee attack can be performed.