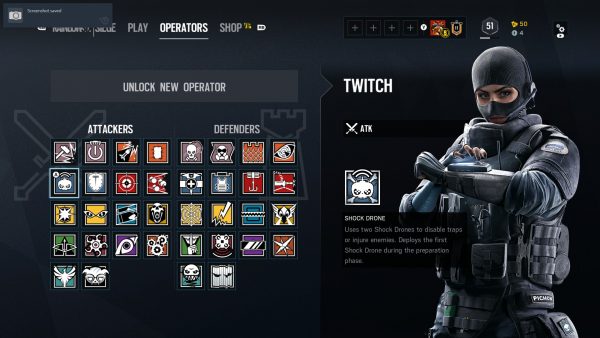 Twitch is a tech attack Operator. She relies on her special Shock Drone to search out and destroy any enemy cameras and gadgets with the tazer. The tazer can also injure enemies with 10 damage per shot, but the amount of damage is far too small. It’s best to sneak around destroying electronics instead of attacking enemies. The shock drone is great for eliminating mute’s signal jammers, bandit’s shock wire, kaid’s dragon claw, kapkan’s tripwire, and any person’s cameras.

Since the release of Operation Burnt Horizon, Mozzie has become the biggest threat to Twitch. Mozzie has the ability to hack and steal Twitch’s shock drones with his pest gadget. Twitch can destroy a pest gadget before it becomes hacked by one, but Mozzie can also shoot a pest directly at the shock drone.

Twitch’s unique ability is the Shock Drone. This piece of equipment replaces normal drones with two specially made drones. The shock drone cannot jump, but it comes equipped with a five-shot tazer.

The tazer can instantly destroy

When it comes to Maestro’s evil eye, the Tazer will disable the camera and open the blast door slightly when the outside is shocked. Use the Tazer again to destroy the camera in this vulnerable state before it becomes operational again.

Two shock drones are available per round, the first is deployed during the preparation phase, and the second will be stockpiled. The tazer is best used against equipment, but it can also be used to injure an Operator by 10 HP. Drones blink yellow for friendly, blue for enemy, and white for Vigil and Nokk.