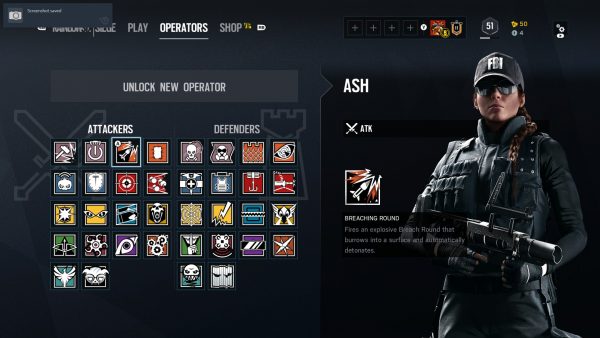 Ash is a speedy attack Operator. Use her to hit hard and fast. Her special ability is a grenade launcher that is used to blow apart breakable surfaces. It’s similar to a mobile breach charge. Throw a flashbang before entering a room, then pick off each Operator with Ash’s deadly assault rifles. She won’t be able to withstand much damage, but she is hard to hit while moving and packs a deadly punch.

Ash’s unique ability is a single fire grenade launcher. Switch to the grenade launcher to fire an explosive Breach Round that burrows into a surface and automatically detonates a second later. These breach rounds will kill any Operator near the blast, but the further from the explosion the less damage will be done. These rounds can only bust through destructible surfaces, not reinforced steel.

The breach round can be captured by Jager’s active defense system. After the Y4S3.2 patch, the Breach Round will no longer be affected by electricity.