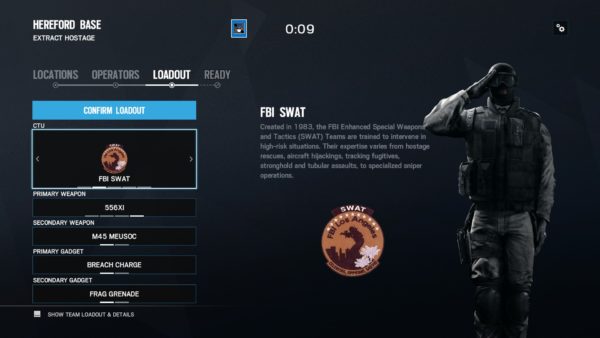 Recruit is the original Operator who is unlocked by default. This operator’s loadout and stats change based on the CTU and whether or not you’re an attacker or defender. The CTU can be chosen after selecting Recruit before the game. Their variety of gadgets often make up for their lack of a special ability.

The table below lists the various options you can choose for Recruit based on the CTU. As an attacker, Recruit will carry two drones, a grappling hook, and must choose between Breach Charges x2 or Smoke x2 in the first gadget slot and Frag Grenade x1 or Stun Grenade x3 in the second gadget slot.

In Siege, shields can withstand all firearm damage and reduce explosive damage. It is important to remain crouched because your legs will be exposed, but there are other weak points that can be targeted by a marksman. When switching to your secondary, the shield will be placed on your back, offering protection from the rear.

A handgun can be fired while behind the shield, but only from the hip with terrible aim. When aiming the firearm, the shield will be tilted diagonally and only protect the midsection. Moreover, using a secondary weapon while the shield is out in front will prevent the gun from auto-reloading.

As a defender, Recruit will carry one reinforced wall barricade, infinite normal barricades, Barbed Wire x2 in the first gadget slot, and the choices of Nitro Cell x1 or Deployable Shield x1 in the second gadget slot.