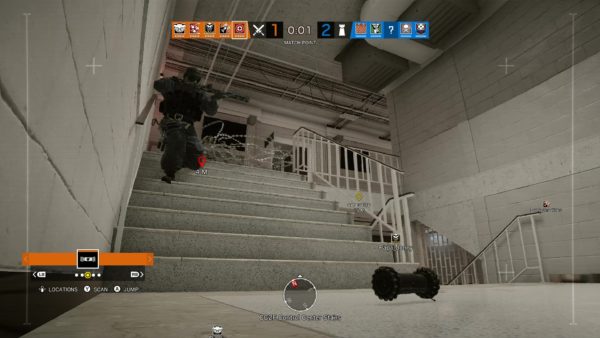 Rainbow Six Siege’s is a tactical first-person shooter that focuses on short objectives. Skilled operators from various counter terrorism units (FBI SWAT, SAS, SPETSNAZ, etc) battle against each other to attack or defend an objective inside a single building. Teams then switch sides and the objective might move to a new location after each round.

This game is first and foremost a tactical, team-based shooter. If you think you can run around the map and kill every opposing player on your own, you’re gonna have a bad time! This page will teach new players about the basic game mechanics of Rainbow Six Siege.

One of the most important aspects of Rainbow Six Siege’s meta is speed vs armor. Movement, health, and protection have been constantly tweaked over the past several years. These mechanics are meant to pit quick and weak Operators against slow and well protected ones. The developers have stated that they want offense to take more chances with their speed, while defense needs to be able to take a number of hits with their armor. 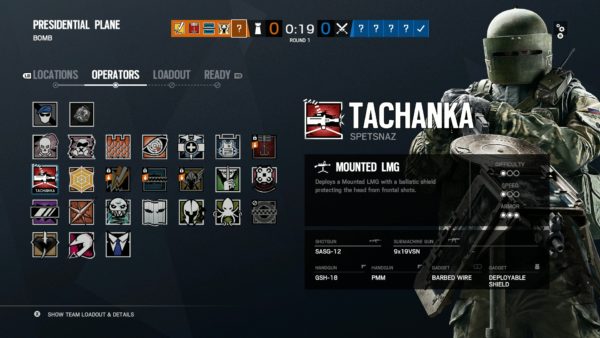 Put accuracy into the equation, and a simple headshot will take down anyone standing in the way. Of course, an Operator can be on the offensive team while playing defensively. It all depends on the stats and abilities of the selected character.

Basic movement in Rainbow Six Siege is inline with most first person shooters. Players can sprint, walk, crouch, go prone, vault over lower obstacles, and climb up ladders. However, players will not be able to jump around like Call of Duty or Halo gamers.

Movement is important in Rainbow Six Siege because all players will be listening intently. The faint sound of a gadget deploying or the soft footsteps of a crouching Operator will notify any aware Operators. The more movement that is being done, the more noise will be made.

In addition to crouching around the map, Operators can peek and lean around corners to remain stealthy. The goal is the minimize yourself as a target while observing the area. The only downsides to leaning is that your weapon will kick diagonally instead of straight up, and you’re more likely to get shot in the head for an instant kill if your face is the only thing poking around a wall.

Going prone is only useful for increasing accuracy a slight amount and reducing yourself as a target. Just like peeking and leaning around corners, you do not want to give your enemy a large target to shoot.

Each player starts a round with 100 health. This health will not regenerate, and there are no health packs available around the map. The only way to get more health is from the Operators Doc, Finka, or after being revived from a downed-but-not-out state. Doc, Finka, and Zofia can also self revive, but Finka and Zofia will not receive as much health as opposed to being revived by a teammate or Doc’s stim gun.

An injured player is when an Operator loses all of their health and drops down to the floor before bleeding out. The developers often refer to this as a “down but not out state,” but I will simply say “downed” throughout this guide. A downed Operator can either crawl around or hold their wound to slow the bleeding. The more an injured Operator moves, the faster they’ll bleed out and die. Stand completely still and hold the wound to survive for a max of 60 seconds. 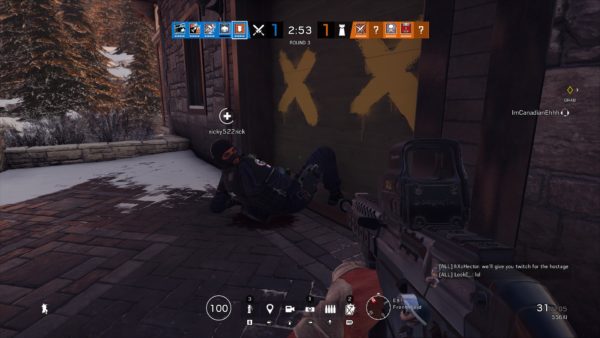 The best option when injured is to hide behind a hard surface, hold your wound, and wait for your teammates to revive you. A player will not go down if they are killed with a headshot, and it’s not certain if they will go down when shot in the torso. Aim for an Operator’s limbs and it’s almost certain they will fall to a downed state instead of instantly being killed. Explosives are a bit random when it comes to downing an Operator.

To revive a player, walk over to them and hold the button that appears on screen. It will take about three seconds to stabilize an injured Operator. The revived Operator will re-enter the fight with 20 Health, and will not return to a downed state in the same multiplayer round.

Friendly fire is always on in Rainbow Six Siege! If a player shoots their teammate or the hostage, they will injure and possibly even kill the friendly! Be extremely careful when firing your weapon and using any equipment.

Reverse Friendly Fire is an option that causes any damage done to teammates to automatically return to the offender without damaging the friendly Operator. This was put in place around Year 4 because of the toxic behavior of new players team killing for fun.

Every Operator comes equipped with one primary weapon, one secondary weapon (usually a sidearm), one gadget, and their unique ability. A knife melee attack can also be performed for an instant kill.

Each loadout is tied directly to an Operator. Weapons cannot be picked up or switched out on the battlefield. Ammo can only be refilled by interacting with ammo crates during Terrorist Hunt, but none will be available during Multiplayer. 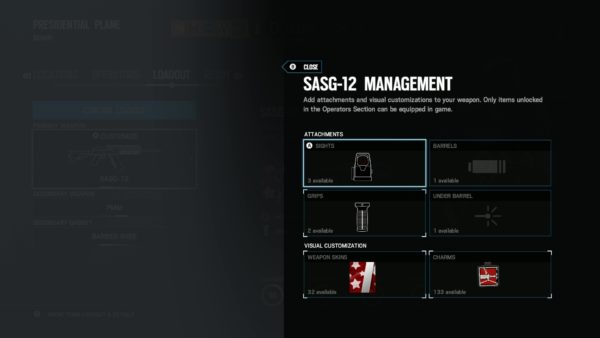 Limb penetration has been reworked after the Y4S4 update. Now most weapons can penetrate the arms and legs of Operators and can even do further damage to others behind. Simple penetration will allow bullets to go through limbs and land successful headshots on the same Operator. An example is when an Operator puts a hand up after being blinded by a stun grenade. Full penetration will go through limbs and hit Operators behind with a 30% damage reduction. Although most shotguns have no penetrating power, the BOSG.12.2 and TSCG12 fire slugs that have full penetrating power.

When an enemy starts shooting towards you, smoke trails will give off their direction, and a curved bar will appear towards the middle of the screen to confirm the direction. Try to get behind a hard surface if caught out in the open. Once actually hit, the screen will blur for a short time.

This game is highly tactical, and the developers spent a lot of time and effort animating each gun’s reload animation. If you switch to another gun or perform an action while reloading, the reload animation will pause and continue when you switch back. Most guns reload faster if the magazine is changed before the weapon completely runs out of ammo. Once the weapon reaches 0 ammo, a separate action must almost always be performed to add a round to the chamber. However, there are some exceptions such as revolvers and belt-fed light machine guns.

Firing your weapon while it’s at your side is known as firing from the hip. It’s not very effective unless the enemy is incredibly close. The best way to increase your accuracy is to aim down the weapon sights. Crouching will increase your accuracy more than standing, and going prone will give you the best accuracy.

Another way to increase accuracy is to switch a weapon’s fire mode. Not all weapons have different fire modes, however. To find out, simply press the button with the bullet icon that appears at the bottom of the screen. If there is no button or icon, the weapon only has one fire mode that cannot be altered. Most assault rifles and submachine guns can switch between fully automatic, semi automatic, and sometimes burst fire.

Rainbow Six Siege excels in destruction, and you’ll need to master it if you want to succeed in this game. Each map has three different types of surfaces: fully breakable, partially breakable, and unbreakable. They each respond differently to Operator equipment and explosives.

Breakable surfaces can be destroyed easily with impact grenades, nitro cells, and breach charges. Shotguns can also be used to create openings, but it’ll take several shots to make a hole big enough for a person to fit through. 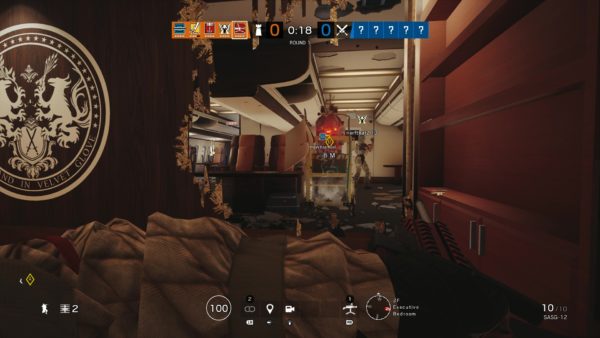 Other firearms can also destroy walls, but the wooden beams will remain intact. Light Machine Guns and Marksman Rifles have the second-best penetrating power, followed by assault rifles, submachine guns, and pistols. There are exceptions to the rule, however. 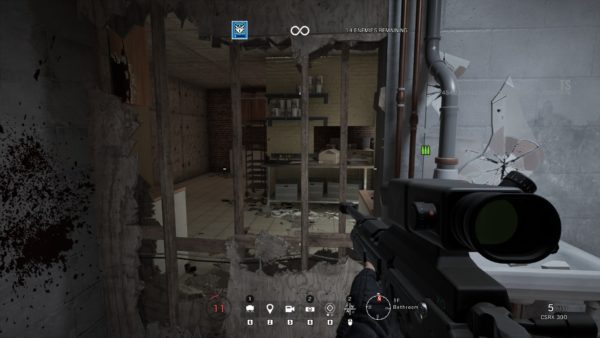 Partially destructible surfaces are slightly uncommon in the game. They can be shot through and destroyed like the fully breakable surfaces, but they are also reinforced with steel beams that cannot be breached. Destroy these surfaces to create new lines of sight for firearms and gadgets, but you won’t be able to make new doors or paths that people can fit through.

The most common partially destructible surfaces are floor/ceilings on multi-level buildings. To jump down a floor, players can breach through hatches around the building. 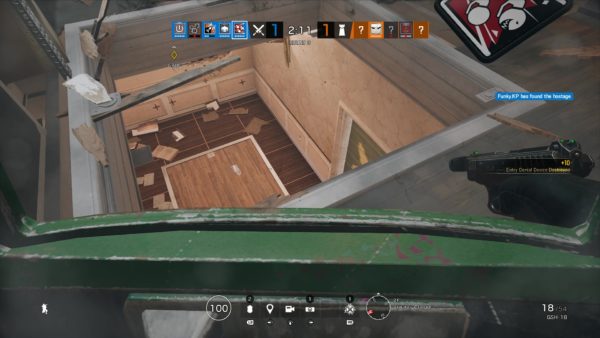 Unbreakable surfaces mean they cannot be destroyed or even shot through. Don’t waste any ammo or explosives on them.