This section will teach you all you need to know about Pokemon battles, one of the core aspects of the game. Of course, you can always play and learn through trial and error, but this page will help those who wish to learn before jumping into the game.

What Are Pokemon Battles?

Pokemon battles are the primary component to any Pokemon game. Trainers can encounter and battle Pokemon in the wild, or they can come across other trainers to initiate a battle.

The objective of all battles is to make all the Pokemon on the other team faint. To do this, you must reduce all HP from the other team’s Pokemon by using attacks. After a Pokemon on the other team is defeated, you will be given the option to choose a substitute Pokemon to face the next enemy Pokemon — unless you changed the battle style option in the options menu to set instead of rotate. If you’re fighting a Pokemon in the wild, you can attempt to run away from battle at any time; however, certain conditions in battle may prevent you from being successful.

Each trainer can carry up to six Pokemon on their team. These Pokemon can be switched at any time during battle, but doing so will count as a turn. All battles are turn-based.

If you lose a Pokemon Battle, you will be sent to the last Pokemon Center you visited to heal your Pokemon. Your Pokemon will keep any increases in levels or new moves they may have learned during the previous battle, but if a Pokemon was about to evolve, they’ll have to wait until they reach the next level and win another battle before they will evolve.

HP, which is short for Hit Points, are the points a Pokemon associates its health with. As Pokemon level up, they gain more HP. Have your Pokemon attack another Pokemon until they lose all HP and faint.

To reduce a Pokemon’s HP, you must use certain attacks on a Pokemon. The battling system is based on the old school JRPG turn-based system. Both sides choose an attack and the Pokemon with the higher speed stat, or faster move, hits first. Each and every Pokemon can learn up to four moves at any given time. As Pokemon level up, they can learn new moves and replace one of the older four in their move set.

Some moves have a lot of PP, like Tackle’s 35 PP, but other moves may only have a total of 5 PP. If all four moves run out of PP during a Pokemon Battle, the Pokemon will use a special move called “Struggle.” Struggle is a type-less physical attack that damages the user a small amount each time they injure the opponent.

Most of the battles in Pokemon are direct one on one battles. However, there are other kinds of matches that allow numerous Pokemon to fight at the same time or that offer certain rules and restrictions.

In battles with more than two Pokemon, some attacks can be done to a Pokemon’s ally or to the opponent Pokemon. Obviously, you don’t want to perform any harmful attacks to your allies, but there are some attacks that will affect all the Pokemon on the field. Think before you act!

Multi-Battles are exactly the same as Double Battles, but two trainers (four total) will be on each side with their own Pokemon. If you defeat all the Pokemon of one trainer, only one Pokemon will be released as an opponent instead of two.

Triple Battles are straight up three vs three matches. Unlike Double Battles, Triple Battles force Pokemon to focus on range. Some attacks can only hit Pokemon in front of the user, one space to the left, or one space to the right. Pokemon in the middle of their team can easily hit all three opponents, but that also means all three opponents can retaliate against that same Pokemon. As for the Pokemon on the left and right sides of the field, they won’t be able to reach the Pokemon on the opposite side of the battle unless they use certain long range attacks. If the last two Pokemon are too far away to hit each other, they will both be reset to the middle positions.

Pokemon can also be shifted around the battlefield in Triple Battles. The two outside Pokemon can use a turn to switch positions with the middle Pokemon.

Moves that normally damage opponents and allies in the other Multi-Pokemon battles will not damage multiple opponents or allies in Rotation Battles.

Sky Battles only allow Flying-type Pokemon or Pokemon with the levitate ability to fight in battle. It’s still a simple single battle, but it takes place in the sky. Unlike most other battles, you can accept or decline before starting a Sky Battle.

A new Pokemon Battle has been introduced in Pokemon Sun and Moon called Battle Royal. Four trainers fight on the same battlefield in a free-for-all type match. Each trainer can choose up to three Pokemon per battle. The battle ends once one Trainer looses all of their Pokemon. The Trainer that defeats the most Pokemon out of the 3-9 opponents will win the match. 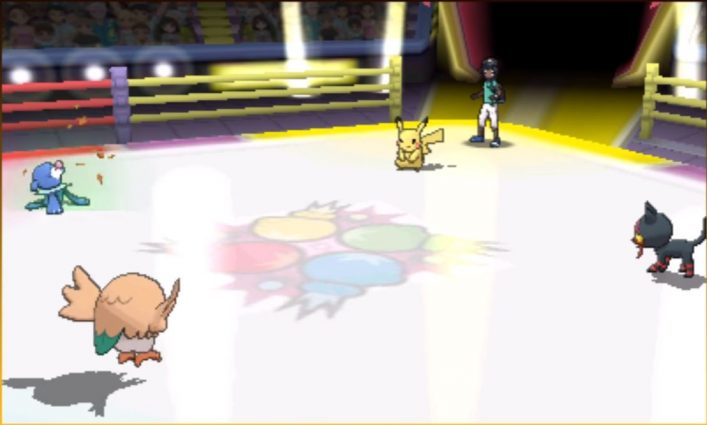