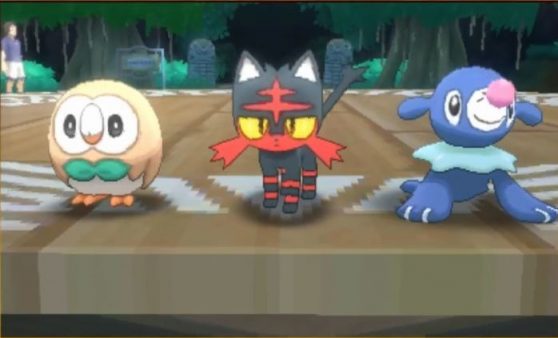 Like every Pokemon game, Sun and Moon allows you to choose one out of three Pokemon to start your adventure with. Choose wisely, you won’t be able to pick a different starter later in the game, and the others cannot be found in the wild. It’s always best to save before choosing in case you want to change up the nature or try for better stats.

Unlike past generations, Sun and Moon will allow you to have the upper hand in types match-ups against your rival. If you choose Rowlet, your rival will choose Popplio.

The grass quill Pokemon Rowlet is a grass/flying-type Pokemon that specializes in physical attacks over special attacks, though its base stats in its final evolutionary form are split pretty close between attack and special attack. However, its defense, speed, and HP are rather low. Its final evolutionary form replaces the flying-type with the ghost-type.

The fire cat Pokemon Litten is a fire-type Pokemon that specializes in physical attacks. Its final evolutionary form adds the dark-type to the fire-type, and further increases its attack base stat. However, it has terrible speed compared to all other base stats.

The sea lion Pokemon Popplio is a water-type Pokemon that specializes in special attacks. Its final evolutionary form adds the fairy-type to the water-type, and increases its special attack and special defense base stats. Its attack, defense, and speed stats are its weak points, however.