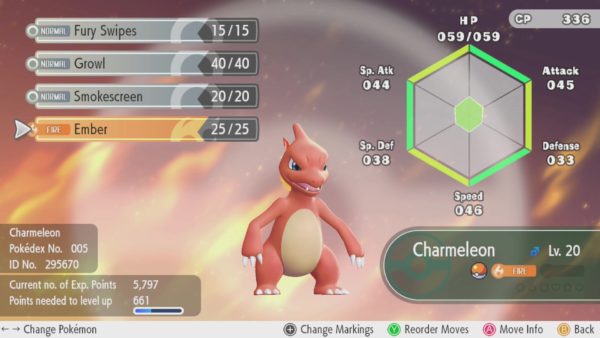 Every Pokemon’s strengths and weaknesses are determined by six stats: hit points (HP), attack, defense, special attack, special defense, and speed. Pay close attention to these stats to bring out the full potential of your Pokemon. It might seem like a lot at first, but you don’t have to learn everything unless you want to get competitive. First let’s discuss the six different types of stats in Pokemon:

Base Stats, IVs, and Candies

In Pokemon Let’s Go Pikachu and Let’s Go Eevee, there are three variations of these six stats to make each and every Pokemon unique. 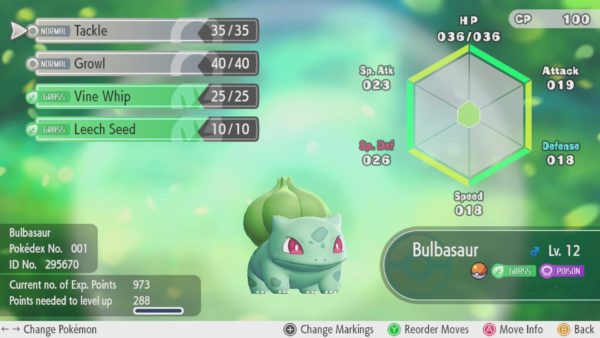 Next up are the stats commonly called individual values (IVs) or determined values. Every Pokemon has a set of randomly assigned stats once they are captured or received as a gift. The partner Pokemon, Pikachu and Eevee, will always have maxed out individual values. Similarly, Pokemon received as gifts often have very high or partially maxed out individual values. However, all wild Pokemon will have randomly generated IVs. Build catch combos to find Pokemon with better stats more often. The tiers are Not So Good, OK, Good, Very Good, Fantastic, and Best.

Only competitive Trainers pay attention to these stats. In fact, these stats cannot be seen until the Judge feature is added to your Pokemon’s summary. This is a reward from Professor Oak’s Aide in the house between Routes 11 and 12 for capturing 30 different species of Pokemon. The Stats shown in the Judge feature can be one to three stars with a summary of OK, Good, Great, and Amazing!

The final type is being called awakening values (AVs). These are the stat increases earned each time a Pokemon levels up or eats some candies in Let’s Go Pikachu and Let’s Go Eevee. That is the reason why wild or newly captured Pokemon are always weaker than trained Pokemon. 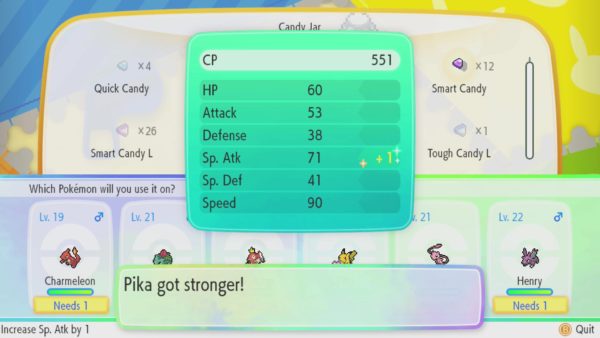 Pokemon can be chained together with Catch Combos to increase the candies you receive after a wild encounter. The easiest Pokemon to chain for candies and where they can be found in the wild are listed in the table below.

At first, one candy will increase a Pokemon’s stat by one point; but as the stat builds up, it will take even more candies to increase the stat by one point. The amount of candies needed depends on the individual Pokemon. Eventually, you will need 20 candies just to increase a stat by one level. Once a stat reaches a certain limit in Awakening Values, you will be forced to use a different kind of Candy (L, XL, and Species). A stat can have a max of 200 awakening values. See the candies page for more info. 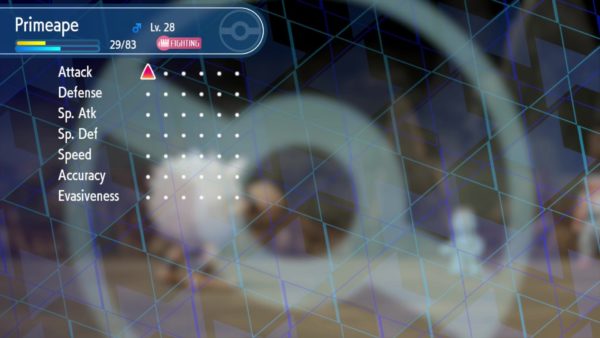 Two other stats can also be found in-game, but only during battle. For that reason, they’re commonly known as battle stats. Those two stats are evasiveness and accuracy. Instead of being part of a Pokemon’s own stats, they are tied to the Pokemon’s moves. Some attacks are very precise, while others are best used after applying accuracy boosts.

Accuracy is the stat that determines the ability to hit a Pokemon. All moves have an accuracy stat which ranges from 100% to 30%. The lesser accurate moves are usually much more powerful. Some moves — such as Aerial Ace — will always hit no matter what your Pokemon’s accuracy is!

Evasiveness is the stat that determines the ability of a Pokemon to dodge an attack. A Pokemon’s evasiveness can be increased or decreased in battle to evade a Pokemon’s moves, just like if you were to lower an opponent Pokemon’s accuracy.

Base stats can be increased or decreased a max of six stages with stat altering moves or items. Some stat changing moves can alter a Pokemon’s stats two stages at a time, meaning they only have to be used three times instead of six.

The following tables showcase the increases and decreases made to base stats. Say an attack does 50 points of damage. If you increase a stat that affects that damage by three stages, you will increase the damage by 150%, adding 75 points to the 50 points of damage, making it a total of 125 damage. Some people find it easier to use damage multipliers by multiplying 50 by 2.5x to get 125 damage, so those are included as well.

Unlike base stats, accuracy and evasiveness changes have slightly different values. The principles are the same, and you can increase or decrease the stats by six stages, but the percentage they’re increased or decreased by is slightly altered.